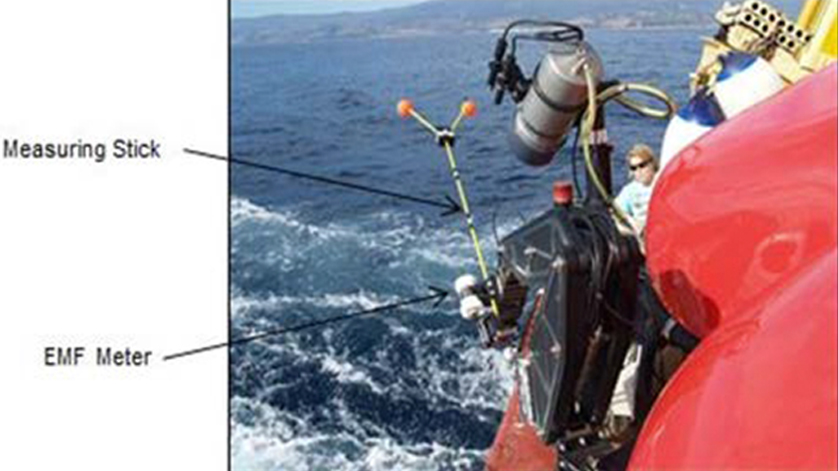 A new report from the Bureau of Ocean Energy Management (BOEM) addresses four questions about the impact of submerged power cables on fish and invertebrates, the principal one being whether electromagnetic fields (EMF) from submerged power cables attract or repulse fish or invertebrates. The purpose of the study was to shed light on the potential effects of energized, seabed deployed, power cables on marine organisms, broadly applicable to planned and future renewable energy projects in the Pacific Outer Continental Shelf (OCS) region and other OCS planning areas.

The experimental design tested for the effect of inshore versus deep water cable placement. Researchers found that few biological effects could be detected from patterns of species relative abundance, and there was no evidence of behavioral response by electro-sensitive species. These findings may help inform appropriate mitigation measures for the permitting of undersea power cables.

Methodology: BOEM’s Pacific Region office and research partners from the University of California Santa Barbara undertook this experiment in a natural setting using existing, undersea power cables connected from three drilling platforms in the Southern California OCS–Platforms Heritage, Harmony and Hondo, at depths to about 326 meters (1069 feet)–to Las Flores on the mainland. The cables run from the platforms toward the mainland to a sea floor depth of 10 meters (about 33 feet), and from there are buried inshore. All of these cables use the industry standards of the power cables that will be used for connecting devices (35 kilovolts) within renewable energy installations. 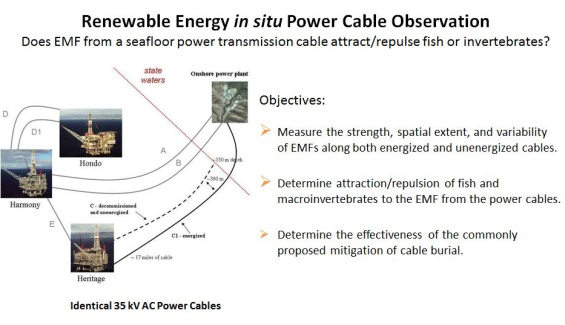 During the three-year study, researchers conducted 38 days of fish surveys, 30 days of invertebrate studies and 38 days of plant studies–in February for the nearshore areas and October for the offshore areas. Over all habitats, they observed 4,671 individuals of a minimum of 44 species of fishes. They also observed a total of 30,523 invertebrates from at least 43 invertebrate species.

The four specific objectives of this study and highlights of the findings include:

1.The differences among fish and invertebrate communities associated with three different habitats–energized and unenergized cable habitat and those communities in soft seafloor habitats lacking cables.

Finding: Researchers did not observe any significant differences in the fish communities living around energized and unenergized cables and natural habitats. Overall species diversity and the densities of the most important fish species (defined as comprising at least 1 percent of all fishes observed) were higher at the cables than at the natural habitats. This is likely due to the more complex habitats afforded by the cables than the primarily soft substrata natural habitats. Similar to the fish communities, the invertebrate assemblages living around energized and unenergized cables and natural habitats were similar to one another and the variability between these communities was driven primarily by sea floor depth.

2.Whether electro-sensitive species that are regionally important, such as sharks and rays, respond (by either attraction or repulsion ) to the EMFs of an in situ (in place) power transmission cable.

Finding: Researchers observed very few individuals of electro-sensitive species on the energized or unenergized cables or on the natural habitats. They found no compelling evidence that the EMF produced by the energized power cables in this study were either attracting or repelling fish or macro invertebrates.

3.The strength, spatial extent (distance), and variability of EMFs along both energized and unenergized cables.

Finding: The EMFs produced by the energized cables were similar both over the three years of the study and along the cables. EMF strength dissipated relatively quickly with distance from the cable and approached background levels at about one meter from the cable. The EMF at unenergized cables was similar to that found at the natural habitats.

4.The potential effectiveness of the commonly proposed mitigation method—burying the cable.

Finding: Given the rapidity with which the EMF produced by the energized cables diminishes and the lack of response to that EMF by the fishes and invertebrates in this study, cable burial would not appear necessary strictly for biological reasons. In this and similar cases, cable burial at one to two meters depth below the seafloor would be an adequate mitigation tool to further decrease potential exposure to EMF.