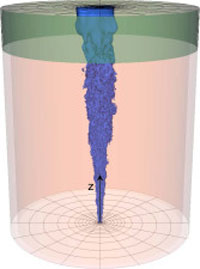 The simulations showed that the presence of gas, even at relatively small volumes, significantly increased the mixing of hydrocarbons in the plume. Gas bubbles moving past the slower-moving oil amplified vertical and horizontal plume growth. The team published their study in Ocean Modeling: Numerical simulations of turbulent thermal, bubble and hybrid plumes.

Deep oil spills, such as the Deepwater Horizon, generate buoyant plumes that can transport hydrocarbons thousands of meters across the water column. The dispersion of the pollutants depends on the many physical and chemical processes related to turbulent mixing as the plume grows.

To improve oil transport prediction model accuracy, there needs to be careful examination of assumptions and parameter values for these complex processes. Lead author Alexandre Fabregat explained, “A variety of tools have been used to predict the evolution of buoyant plumes. However, in these models, it is necessary to specify several parameters that control how fast the plume width increases as it travels vertically or how much the bubbles enhance the mixing.”

To understand and quantify the basic physical properties of deepwater plumes, the study team compared thermal plumes (single-phase), bubble plumes, and hybrid plumes (multiphase). They analyzed plume behavior, varying the inlet gas contributions to the models. Simplification of the system to a single momentum equation – the gas slip velocity relative to that of the liquid phase – allowed computation of nearfield turbulence over scale ranges similar to previous and potential deepwater releases.

Plume simulations with gas bubbles showed increased turbulent mixing, entrainment (one substance entrapped by another as they pass), and speed of downstream spreading. Two-phase plumes produced more turbulence and spread faster than single-phase plumes. The relationship between the gas volume and the observed turbulence was not linear. A 50% reduction in the inlet gas volume fraction produced no significant difference in the multiphase turbulent kinetic energy budgets. However, appreciable differences were observed even when the gas-phase buoyancy contribution was only 10% of the total energy budget.

The authors noted that the present model can be extended to study turbulent dynamics in more realistic representations of large-scale deepwater releases. By considering non-uniform slip velocities or distributions of gas phases with different slip velocities, one may study bubble interaction and more complex environmentally dependent biogeochemical processes including dispersant effects. Fabregat said, “This new approach is capable of reproducing and explaining the increased turbulence intensities observed in bubble plume experiments. This fills a significant gap in our present knowledge of deep spills, specifically the role played by the gas in increasing the turbulent mixing.”

This research was made possible in part by a grant from the Gulf of Mexico Research Initiative (GoMRI) to the Consortium for Advanced Research on Transport of Hydrocarbon in the Environment (CARTHE) consortium. Other funding included the National Science Foundation (OCE-1332718).

The Gulf of Mexico Research Initiative (GoMRI) is a 10-year independent research program established to study the effect, and the potential associated impact, of hydrocarbon releases on the environment and public health, as well as to develop improved spill mitigation, oil detection, characterization and remediation technologies. An independent and academic 20-member Research Board makes the funding and research direction decisions to ensure the intellectual quality, effectiveness and academic independence of the GoMRI research. All research data, findings and publications will be made publicly available. The program was established through a $500 million financial commitment from BP.