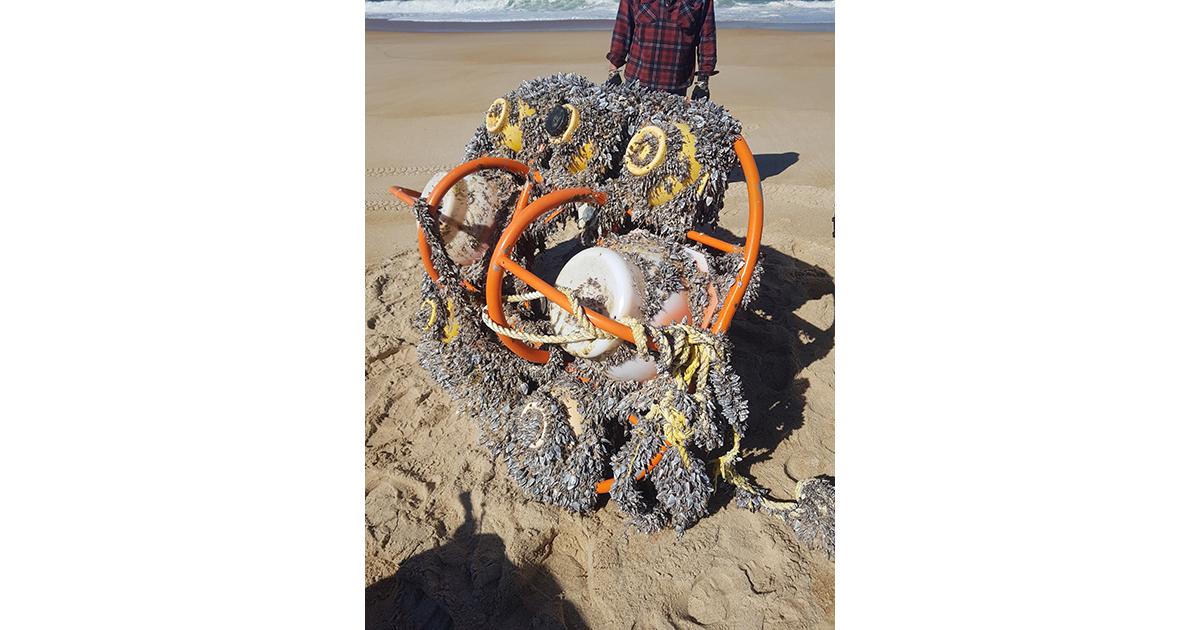 After going missing on Christmas Day five years ago, deep ocean measuring equipment belonging to the UK’s National Oceanography Centre (NOC) has just been found on a beach in Tasmania by a local resident after making an incredible 14,000 km journey across the ocean.

In 2011, this deep-ocean lander instrument was deployed by NOC scientists in the northern Drake Passage, which is a narrow section of the ocean between South America and Antarctica. Measuring ocean bottom pressure here helps provide information on the Antarctic Circumpolar Current, which is the largest ocean current in the world. The instrument was due to spend two years collecting data at a depth of 1100 meters, before being recovered on Christmas Day in 2013 by a research expedition on the Royal Research Ship (RRS) James Clark Ross, operated by British Antarctic Survey. However, it did not return to the surface as planned for reasons that are not clear, possibly due to something getting tangled up with the release mechanism.

After being presumed lost, the deep ocean instrument frame was discovered washed up on a beach on the western tip of Tasmania. After being made aware of the find, the manufacturers were able to use the serial numbers on two of the sensors on the frame to trace the NOC as the owners and contact them.

The instruments, frame and data sensors have now been removed from the beach as a result of a collaboration between the finder of the instrument, the NOC, the Commonwealth Scientific and Industrial Research Organization (CSIRO) and the Integrated Marine Observing System (IMOS) based at the University of Tasmania, in Hobart. The process of removal from the beach took several trips over a number of days, and the data sensors have now been taken to CSIRO where a team have managed to successfully recover some of the information. It is hoped that a scientific analysis of the recovered data will soon provide further insights into this remarkable journey.

This instrument was developed by a team of scientists and engineers at the NOC to measure sea level by means of precision pressure sensors, as well as monitoring salinity and temperature.

Professor Ed Hill, Executive Director of the NOC, said “Finding this instrument is like an early Christmas present. The Antarctic Circumpolar Current is key to understanding the dynamics of the global ocean, so these sustained observations are incredibly important. There is no better place to make these observations than the narrow Drake Passage, which is why this instrument was deployed there before it made its epic journey to Tasmania.

The Antarctic Circumpolar Current is three times bigger than the Gulf Stream and connects all three major ocean basins, transporting heat and carbon between them. In addition, it circulates around the whole of Antarctica, keeping warm ocean waters away. This allows the Antarctic continent to maintain its huge ice sheet.

The NOC’s sustained observing of the Antarctic Circumpolar Current is an important part of our on-going commitment to improve understanding of future environmental change, as well as the relationship between oceans and climate.”

Although the research project that this instrument was originally deployed for has now finished, research and annual measurements along the Drake Passage are continuing at the NOC. Currently they are conducted as part of the Ocean Regulation of Climate by Heat and Carbon Sequestration and Transports (ORCHESTRA) long term science program. Funded by the Natural Environmental Research Council (NERC), this program aims to use measurements of the Antarctic Circumpolar Current, alongside computer simulations, to radically improve scientific understanding of the circulation of the Southern Ocean and its role in the global climate. This program has a particular emphasis on the way the Southern Ocean absorbs and stores heat and carbon.