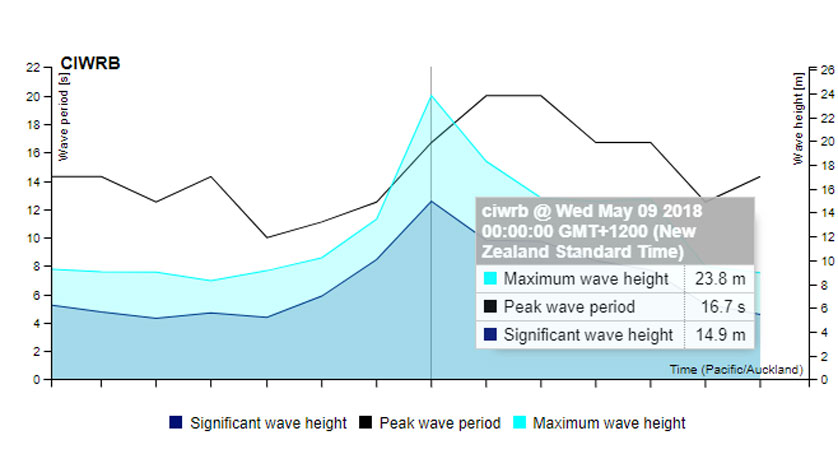 On May 8, MetOcean Solutions wave buoy moored in the Southern Ocean recorded a massive 23.8 m wave.

“This is a very exciting event and to our knowledge it is largest wave ever recorded in the Southern Hemisphere,” says Senior Oceanographer Dr. Tom Durrant. “Our own previous record was one year ago when we measured a 19.4 m wave, and before that in 2012, an Australian buoy recorded a maximum individual wave (Hmax) of 22.03 m. So, this is a very important storm to capture, and it will add greatly to our understanding of the wave physics under extreme conditions in the Southern Ocean.”

“However, it is likely that the peak heights during this storm were actually much higher, with individual waves greater than 25 m being possible as the wave forecast for the storm show larger wave conditions just north of the buoy location. Also, to conserve battery during the one-year deployment, the solar-powered buoy samples the waves for just 20 minutes every 3 hours then sends the data via a satellite link. During that 20-minute recording period, the height, period and direction of every wave is measured and statistics are calculated. It's very probable that larger waves occurred while the buoy was not recording.

“The Southern Ocean is a unique ocean basin and is the least studied despite occupying 22% of the global ocean area. The persistent and energetic wind conditions here create enormous fetch for wave growth, making the Southern Ocean the engine room for generating swell waves that then propagate throughout the planet - indeed surfers in California can expect energy from this storm to arrive at their shores in about a week’s time! Yesterday’s storm is the perfect example of waves generated by the easterly passage of a deep low-pressure system with associated wind speeds exceeding 65 knots. Such storms are frequent and can occur at any time of the year, which differs from the high latitude northern hemisphere storms that only occur in winter. What is interesting about yesterday's event is the storm speed appears to match the wave speed, allowing wave heights to grow dramatically as the system tracks eastward.”

“This is exactly the sort of data we were hoping to capture at the outset of the program,” says MetOcean Solutions General Manager Dr. Peter McComb, who led the deployment of the buoy in March onboard the HMNZS WELLINGTON. “We know that the speed of these storms plays an important role in the resultant wave climate and that has great relevance under both the existing and climate change scenarios.”

The ‘significant wave height’ is the WMO standard value to characterize a sea state - approximately the average of the highest third of the measured waves. During this storm, the significant wave height reached 14.9 m. This is also a record for the Southern Ocean, but falls short of the 19 m world record buoy measurement that was recorded in the North Atlantic during 2013.

The Campbell Island Wave Rider Buoy was moored on 2 March 2018 at Campbell Island, New Zealand’s southernmost estate and an ideal spot to sample the complex directional wave spectra from the Southern Ocean.

The Southern Ocean wave studies are a collaborative project with New Zealand Defence Force, Defence Technology Agency and Spoondrift. As part of that program, MetOcean Solutions has deployed seven instruments to collect wave data, using one moored and six drifting buoys. All data are freely available to the scientific community and can be viewed in real time. For further information and data access, click here.