Listening to an Underwater Volcano Eruption 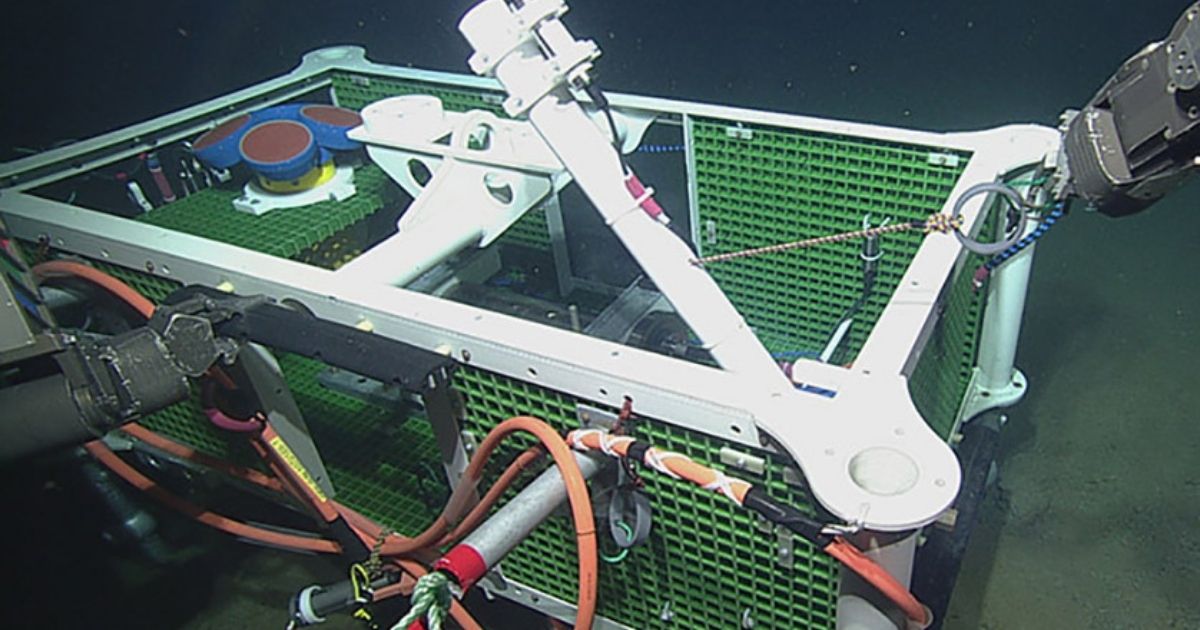 Though we rarely hear them at the sea surface, underwater volcanoes make a variety of sounds when they erupt, from short, sharp cracks to booming explosions and low rumbles.

Geologists aren’t sure exactly what causes all these different sounds. But a new paper shows how scientists can use these sounds to study the details of underwater eruptions on a day-to-day basis.

In studying any eruption, volcanologists are particularly interested in where, when, how much, and how fast lava emerges from the volcano. This helps them understand how that particular volcano works and how it might behave in the future—something that can be especially useful for eruptions that could affect human activities. 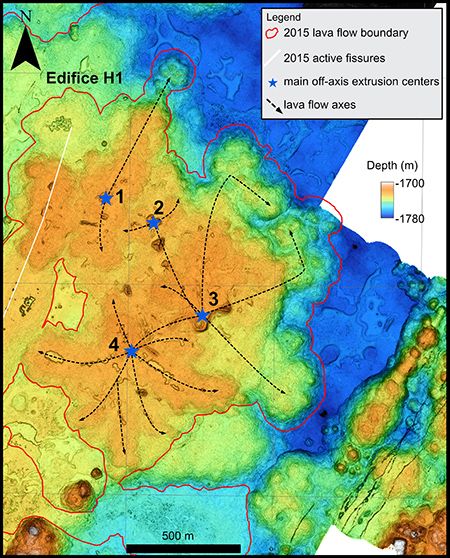 This map of the seafloor shows four eruption centers at Axial Seamount and their associated lava flows. Researchers determined the timing of these eruptions and flows using sounds recorded by a seafloor hydrophone. Image: Morgane Le Saout © 2020 MBARI

Unlike recent eruptions on the Island of Hawaii, where volcanologists were able to map the progression of lava using helicopters and drones, undersea eruptions are much more difficult to study. Most active underwater volcanoes are hundreds of kilometers from shore and thousands of meters below the sea surface. Research cruises to study these eruptions typically take place months or years after the eruption, so geologists have to act like detectives looking for clues at the scene of a crime. 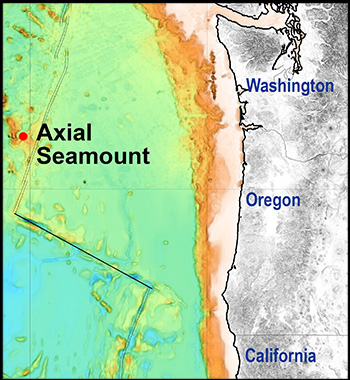 Axial Seamount, an active volcano off the Pacific Northwest, is an exception. Not only is it the most active underwater volcano known, with documented eruptions in 1998, 2011, and 2015, but it is also the most heavily instrumented underwater volcano in the world. Dozens of instruments have been installed on the seafloor around the volcano, including earthquake-monitoring stations, tiltmeters, pressure sensors, and hydrophones. Many of these instruments are connected to shore through seafloor cables as part of a network called the Ocean Observatories Initiative Regional Cabled Array.

Former MBARI Postdoctoral Fellow Morgane Le Saout combined data from these hydrophones with extremely detailed maps of the seafloor to determine where and when eruptions and lava flows occurred during the 2015 event.

The seafloor maps were based on data gathered by underwater robots (autonomous underwater vehicles) operated by MBARI and the Woods Hole Oceanographic Institution. The maps showed individual lava flows and formations as small as one meter across. Using these detailed maps, the researchers could tell exactly where individual eruptions occurred.

The hydrophone data allowed the researchers to determine precisely when explosive sounds occurred and roughly where these sounds were coming from. By comparing the timing and locations of 22,000 recorded explosions with the mapped locations of the lava flows, Le Saout and her fellow researchers were able to correlate specific groups of explosions with specific lava flows. This allowed them to figure out exactly when each lava flow occurred and how each flow evolved over time. 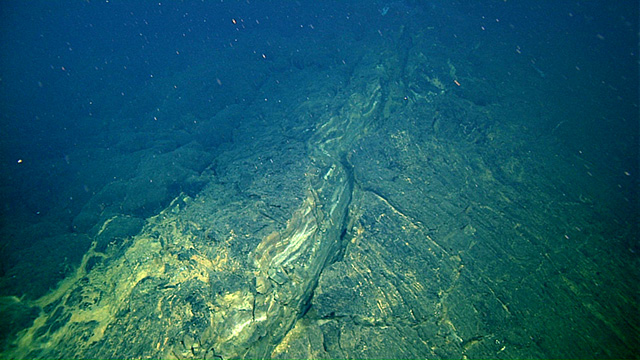 This image shows a large crack in the seafloor at Axial Seamount, where a lava crust from the 2015 eruption was pushed upward, forming a “hummocky mound.” Image: © 2016 MBARI

“Such results are not easy to obtain,” noted Le Saout. “As on land, underwater eruptions happen infrequently, and most underwater volcanoes are too far from coastal regions to be heavily instrumented and mapped.”

The authors think that most of these explosive sounds were created when lava as hot as 1,200 degrees Celsius (2,200 degrees Fahrenheit) interacted with near-freezing seawater. The resulting steam explosions could be large or small, depending on the geologic context.

The largest explosions occurred when hard crusts formed on top of preexisting lava flows. Additional lava filling in beneath these crusts caused the seafloor to bulge upward, forming mounds up to 30 meters (100 feet) high. As these mounds expanded, the crusts cracked, allowing seawater to come in contact with molten lava, resulting in violent steam explosions.

During the 2015 eruption, the hydrophones recorded tens of thousands of explosions that geologists were able to correlate with the formation of individual lava mounds. They were also able to figure out the exact timing of flows from different “extrusion centers” on each mound, when lava broke through the crust and flowed out of the seafloor.

Smaller explosions occurred as these lava flows advanced across the seafloor, trapping small amounts of water under the leading edge of the flow. By tracking the changing locations of these smaller explosions over time, Le Saout and her co-authors were able to track the advance and growth of individual lava flows as they moved away from their extrusion centers. 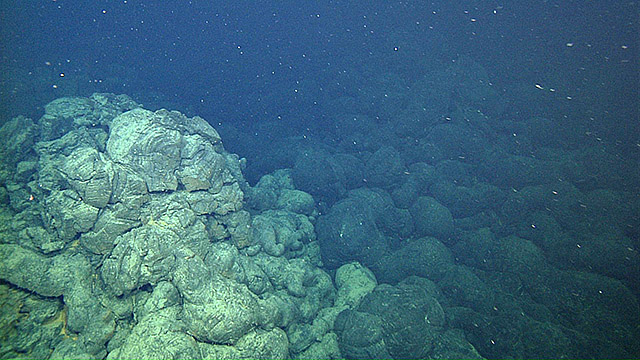 This photo shows a dark lava flow (right) from the 2015 eruption at Axial Seamount next to an older, light-colored flow. As this lava flowed across the seafloor, it trapped pockets of seawater, resulting in small steam explosions. Geologists used the sounds of these explosions to understand the progression of the flow over time. Image © 2016 MBARI

During their analysis, the researchers noticed that these two different types of sounds (large and small explosions) seemed to alternate with each other. This suggests a cycle in which lava mounds first inflated at an extrusion center and then cracked, releasing new lava lobes that flowed away from the area. The authors suggest that this repeating process formed distinctive lava patterns on the seafloor, which they call “hummocky lobes.”

By comparing the duration of each eruption (from the hydrophone data) with the volume of each flow (from the mapping data), the researchers were also able to estimate how rapidly lava flowed from each extrusion center—up to 45 cubic meters (almost 12,000 gallons—or a medium-sized backyard swimming pool) per second.

The fact that researchers were able to make such detailed descriptions of individual lava flows is particularly impressive when you consider that the eruption lasted an entire month and took place 1,700 meters (about 5,600 feet) below the sea surface and almost 500 kilometers (300 miles) offshore.

“Mapping and acoustic data have been combined previously to look at the emplacement of lava flows,” explained MBARI volcanologist and coauthor Dave Clague. “But Morgane had much better mapping data and better locations of the sounds, which combined to make a really nice detailed story of how the flows were emplaced.”

Reflecting on this work, Le Saout said, “This combined method provides new insight into how underwater eruptions evolve in time and space. We hope that such information can be used as a basis to understand past and future eruptions in other underwater volcanic areas.”