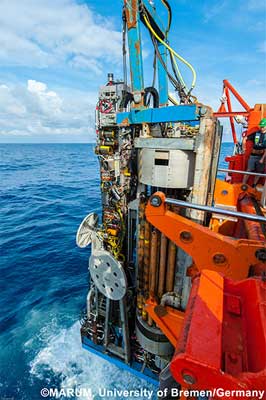 On October 26th, International Ocean Discovery Program (IODP) Expedition 357*1 was implemented as a Mission Specific Platform*2 (MSP) expedition that will address better understanding of the role of serpentinization in driving hydrothermal systems in sustaining microbiological communities, and in the sequestration of carbon in ultramafic rock.

To collect and analyze core samples, drilling focuses on 10 sites of Atlantis Massif located in the Mid-Atlantic Ridge, including upflow region associated with the Lost City Hydrothermal Field. In addition, this expedition will be the first IODP expedition to utilize seabed rock drill technology, MeBo and BGS Seafloor Rockdrill. A total of 32 scientists including three from Japan and those from the U.S., Europe, China, South Korea, and Australia will participate.

A sea bed drilling rig, MeBo developed by the University of Bremen's MARUM Centre for Marine Environmental Sciences. A lowered control container to seafloor by a special cable is remote-controlled from the ship

*1 The International Ocean Discovery Program (IODP) is a multinational cooperative project started from October 2013. A total of 26 nations are currently participating: Japan, the U.S., 18 European countries, China, South Korea, Australia, India, New Zealand and Brazil. The scientific drilling vessel D/V Chikyu operated by Japan and the JOIDES Resolution by the U.S, and the option to charter mission-specific platforms by Europe are utilized for expeditions. It aims to shed light on global environmental changes, the earth’s mantle and crust dynamics and tectonics, and the biosphere beneath the seafloor.

Collected core samples, except those need analysis onboard, will be directly transferred to the Bremen Core Repository at the University of Bremen so that they are sampled and analyzed after the expedition. Due to this approach, onboard scientists are limited only to those who engage in analysis on the ship.