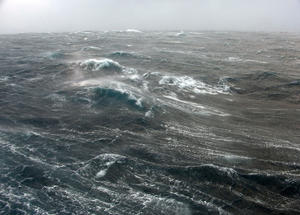 New research has revealed the impact on the North Atlantic of severe ocean surface heat loss during the extreme winter 2013-14. The research by scientists at the NOC, University of Southampton and Imperial College London has just been published and is featured in the recent 2014 State of the Climate report.

Analysis of this cooling event, led by Dr. Jeremy Grist from the NOC, has revealed that it was driven by cold, dry airflows originating from North America and the Nordic Seas. These airflows cooled the surface waters as they blew over the North Atlantic.

The study made use of cutting edge ocean models, including the 1/12° NEMO model run at the NOC, which enabled scientists to study possible pathways of the cold ocean water and predict that it would reappear from the ocean depths in the following autumn. This turned out to be the case as the cold waters re-emerged at the ocean surface in late 2014.

Dr .Grist said “Extreme ocean surface cooling of this magnitude is very unusual in the datasets we used in this study and has left a major imprint on ocean properties both at the surface and at depth”.

His colleague, Prof Simon Josey has highlighted the significance of the extreme winter 2013/14 for the wider North Atlantic including the Labrador Sea in an article for the 2014 State of the Climate report. The article draws together the results of this research with that of co-authors in Canada, Germany and the United States.

Prof Josey, also from the NOC, said “As well as the cooling of the ocean surface found in our study, this winter has resulted in the first significant formation of dense water (exceeding depths of 1700 m) in the Labrador Sea for nearly a decade observed by our international colleagues. Overall, winter 2013-14 was remarkable for impacts across the mid-high latitude North Atlantic.”

This study forms part of the NOC’s ongoing research into modeling ocean circulation and the relationship between the ocean and the climate. Future research at the NOC will investigate the impact that reappearing cold surface ocean water may have on the weather. www.noc.ac.uk