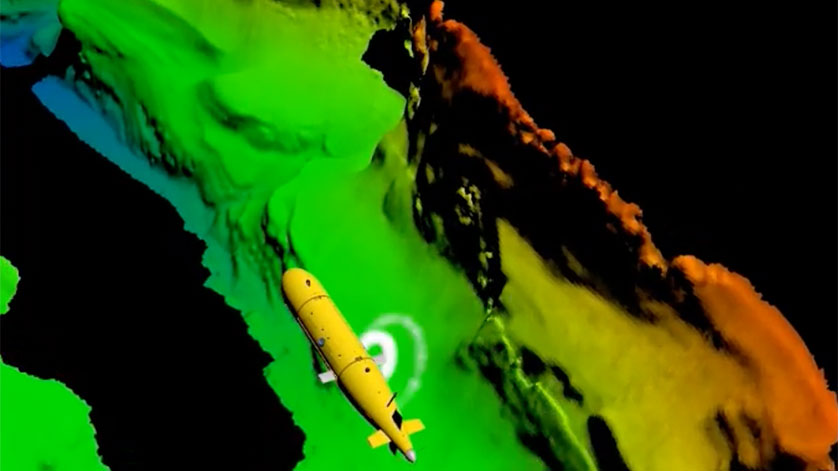 A new study published by the National Oceanography Centre (NOC) combines novel autonomous underwater vehicle (AUV) and remotely operated vehicle (ROV) mapping and imaging methodologies to reveal the complex 3D terrain of deep-sea vertical cliffs and the diversity of species associated with them.

Deep-sea cliffs associated with submarine features such as canyons and escarpments, can host a wide range of species including a particularly high number of ecologically important cold-water corals. The complex habitat created by these corals provides other animals with living space, improving access to food and offering protection from predation.

Understanding the localities and the environmental drivers of these cold-water coral habitats is of considerable interest. Owing to their steep nature, these vertical habitats provide natural protection from bottom-trawling activi¬¬¬ties and therefore, these corals have the potential to be an important source of larvae for recolonization of previously damaged cold-water coral reefs.

However, for many deep-sea environments, only coarse resolution ship-derived maps are available and in most cases, the finer details of seafloor features, such as vertical walls, are absent. Furthermore, traditional seafloor mapping and surveying techniques are usually restricted to downward looking approaches and as a result, these vertical habitats are often overlooked.

Commenting on the study, which is published in Nature Scientific Reports, NOC researcher and lead author Dr. Katleen Robert explains, “To map the seafloor, ship-mounted multibeam echo sounders are used. These sonars create a swath of sound across the path of the ship and measure the time for the sound to leave the ship, bounce off the seabed, and return. This estimates the depth below the ship and provides our first map at approximately a 50m pixel resolution. But to get more detail, we have to get closer to the seabed. This is where AUVs and ROVs are useful; they can fly much closer to the seafloor and the maps that these vehicles generate, are of much higher resolution.”

To examine the vertical walls, the researchers worked with NOC engineers to mount the multibeam echo sounder sideways on the AUV. Forward-looking ROV multibeam and high-definition videography surveys were also conducted at two locations in the North Atlantic. This allowed the team to map these vertical walls at <50cm pixel resolution and, using photogrammetry techniques, 3D reconstructions of the habitats were created, allowing the precise location of individual animals.

Dr. Robert continues, “As the 3D image reconstructions of the coral habitats also retained colours, we were able to quantify the amount of live coral colonies versus the amount of dead coral framework and the individual animals associated with the coral reefs. The combination of these new technologies has allowed us to map the physical 3D structure of previously inaccessible habitats and demonstrates the complexity and importance of these vertical walls in the deep-sea environment.”

This research was funded through the Natural Environment Research Council, the Irish Marine Institute, and the ERC starting grant, CODEMAP.