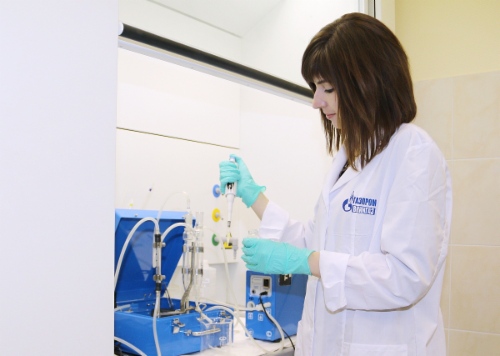 The commissioning ceremony of a production unit for BIOROS, a new oil biodegradation agent, took place on July 7th, at the facility of the Safe Technologies company in St. Petersburg. The event was attended by Oleg Aksyutin, Member of the Management Committee and Department Head at Gazprom.

The new substance was developed by Gazprom VNIIGAZ, the Company's core research center. BIOROS is an innovative product for oil spill cleanup. It is more effective than similar products made in Russia and abroad, as it provides for, among other things, quicker oil spill removal at a greater range of temperatures, from 5 to 45 degrees Celsius.

It was noted at the ceremony that the production of the BIOROS biodegradation agent was a result of Gazprom's fruitful cooperation with domestic companies aimed at manufacturing competitive import substituting products.

BIOROS and its application technology are protected by Russian patents. The product also received the Gazprom Science and Technology Prize. The biodegradation agent will be produced by Safe Technologies under a license agreement.

Safe Technologies Industrial Group is a Russian enterprise that comprises a number of companies focused on the design and construction of environmental, industrial and chemical facilities, as well as on the development of waste management solutions.