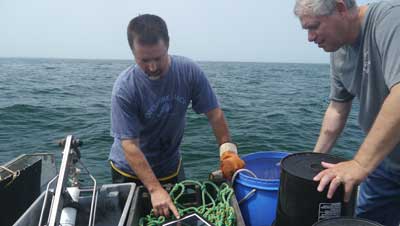 Fishermen plying the waters off the southern New England coast have noticed significant changes in recent years. Though generations of commercial fishermen have made their livings on these highly productive waters, now, they say, they are experiencing the impacts of climate change.

"The water is warming up, and we see different species around than we used to," says Kevin Jones, captain of the F/V Heather Lynn, which operates out of Point Judith, Rhode Island. To help understand the ongoing changes in their slice of the ocean, Jones and other fishermen in the region are now part of a fleet gathering much-needed climate data for scientists through a partnership with the Commercial Fisheries Research Foundation (CFRF) and Woods Hole Oceanographic Institution (WHOI). 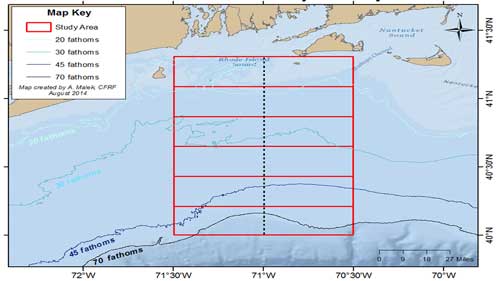 The Shelf Research Fleet is made up of commercial fishing vessels that are fishing in or transiting through the study area throughout the year. They deploy a CTD instrument over the side of their vessels on a weekly basis to collect vertical profiles of temperature and salinity from designated zones within the study area. (Courtesy of Commercial Fisheries Research Foundation)

"There has been a lack of consistent measurements in this region, particularly across the continental shelf south of Rhode Island," says Glen Gawarkiewicz, a physical oceanographer at WHOI and principal investigator on the project. "In order to understand the changes in ocean conditions and how those changes impact ecosystems and the people who depend on them, we need to collect more data, more often."

The Shelf Research Fleet Project began in 2014 with that goal in mind. The fleet is made up of commercial fishing vessels that are fishing in or transiting through the study area throughout the year.

"We're utilizing fishermen's time on the water and their knowledge of the ocean environment to develop an understanding of this highly dynamic area," says Anna Malek Mercer, research fleet director and CFRF executive director. "[The partnership is] unique both in terms of approach and in the data that's coming out."

As part of the project, Malek Mercer and others from CFRF trained captains and crew members in how to take weekly measurements using a Conductivity, Temperature, and Depth (CTD) instrument. The data from the CTD is available in real-time to view onboard the fishing vessel using an iPad tablet. Along with the CTD data, the fishermen can also include notes on the tide, weather conditions, and fish species observed in the area. The data are then sent to researchers and are posted on a website that is accessible to the public.

Members of the fishing research fleet participate in workshops with WHOI scientists where they share their observations about fish movements in the study area, discuss the data collected, and help researchers interpret results.

"The fishermen's insights are really important," Gawarkiewicz says. "And one of best parts of this project has been in building relationships and communication with the commercial fishermen."

In addition to opening up communication between scientists and fishermen, the research fishing fleet approach is proving to be a cost-effective way to collect the needed oceanographic data. "At-sea oceanographic sampling is very expensive, and we've been seeing a reduction in the number of research expeditions," Gawarkiewicz says. "The fishermen are already going out all the time in the areas we need data, and they're provided a stipend for their participation in the program. So it has really been a win-win situation."

Since data collection started in November 2014, results from more than 160 CTD casts have been logged. Scientists use the CTD data to assess the frequency, timing, and extent of intrusions of warm, salty water along the slope and Gulf Stream waters onto the continental shelf. Long-term, the data will help scientists better understand how changes in large scale forcing—including the position of the Jet Stream—affects annual temperature and salinity extremes, and cross-shelf exchange processes during periods of rapid change.

While the increase in data is crucial to the research, Gawarkiewicz says he has gotten so much more out of the collaboration.

"It's been a tremendously rewarding project to work on," he adds. "I've learned a lot about trust and about different ways of looking at things as a result of working on this project. It's made me more self critical about the problems that I'm working on. I want them to be relevant to society—both economically and culturally."

The pilot program, which was funded by a grant from the John D. and Catherine T. MacArthur Foundation, will continue through October 2016. Both Gawarkiewicz and Malek Mercer say they hope to find additional funding to continue the collaborative program indefinitely.

"The Shelf Research Fleet embodies an approach to climate research that is extraordinary valuable for all parties involved," says Malek Mercer. "Scientists benefit from access to fine-scale oceanographic data as well as decades of fishermen's observations. And fishermen benefit from a better understanding of the ecosystem that they rely upon for their livelihoods. Over the long term, these partnerships and data sources can help inform the sustainable management of our ocean ecosystems in the face of a changing climate."

The successful pilot program is highlighted in a new video produced by CFRF.