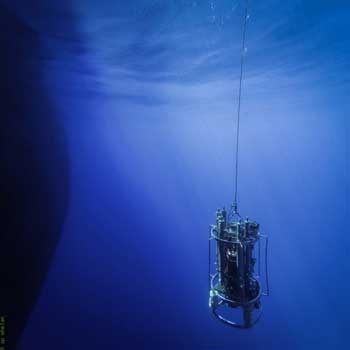 The global overturning circulation of the ocean plays a fundamental role in our climate by redistributing some of the excess heat accumulated around the Equator. The coldest deep waters of the global circulation are created in localized regions near the poles. How these deep waters return to shallower depths through vertical mixing is still not, as yet, fully understood.

In the DoMORE (Dynamics on Mid-Ocean Ridge flank Experiment) project, led by Andreas Thurnherr and Lou St. Laurent, we are studying how the deepest and coldest waters mix with shallower waters, gaining heat in the process. More precisely, we are looking at how interactions of the mean flow and of tidal currents with the topography of the Mid-Atlantic Ridge contribute to the mixing of these deep waters. These interactions accelerate the flow of water at the bottom of the ocean and generate waves. The waves are called internal waves and can travel in any direction, including vertically. Both these waves and the accelerated deep flows strengthen deep mixing.

Deploying a CTD and an LADCP. Photo: S. Whelan

In early September, the research ship Nathaniel B. Palmer set out from Chilean Patagonia on a two-month cruise heading north to the tropical South Atlantic. Onboard is a team of physical oceanographers from the Lamont-Doherty Earth Observatory of Columbia University along with colleagues from Woods Hole Oceanographic Institution. Our aim is to sample the circulation and the mixing of the deep water in a fracture zone “canyon” close to the Mid-Atlantic Ridge halfway between South America and Africa.

Like many canyons in the area, this canyon is characterized by a rugged topography and by two steep walls. Some sections of these walls show almost a 1 kilometer difference in height over several hundred meters. Although the tropical seas are known for their relative calm, it is a different story below the surface!

In this region, the deep waters are known to have some of the most turbulent waters of the Brazil Basin in the South Atlantic.

To measure the currents and the deep internal waves, we use moorings and instruments that are lowered over the side of the ship. These instruments include a CTD (conductivity, temperature, and depth), which measures the salinity and temperature, and a Lowered Acoustic Doppler Current Profiler (LADCP), which mesures the velocities in all three spatial dimensions. The measurements span the full water column all the way down to the seabed, around 4,500 meters beneath the surface.

To relate mixing in the deep waters with the currents and the tides, we also measure turbulence on millimeter scales. We drop from the ship a free-fall instrument called a VMP (vertical microstructure profiler). The VMP goes as close to the bottom as possible and then releases ballast weights to reduce its weight and to return to the surface. It cannot be suspended on a wire because the measurements would be contaminated by the motion of the ship. A compromise must be met between going as close to the bottom as possible so as to observe the patches of turbulence and avoiding crashing the instrument into the sea bed. This operation becomes particularly delicate in the presence of strong currents over the rugged topography.

The deployment of the instruments has worked well so far, and we are looking forward to analyzing this exciting new data set. This will give us a clearer picture of the mixing inside this deep canyon, which is a common topographic feature across the Mid-Atlantic Ridge. The analysis will not only provide a better understanding of the oceanic circulation in fracture zone canyons, but also of the interaction of the currents and the tides with the canyon topography.