Discovery of Over 100 Million Genes from the Marine World 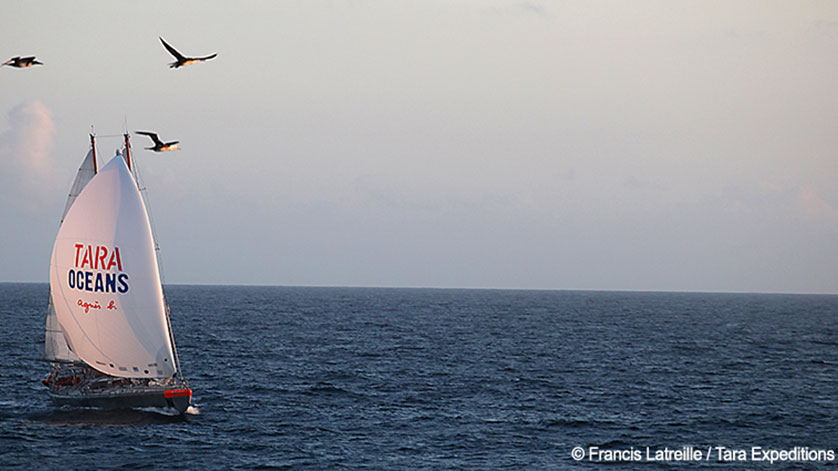 The Tara Oceans expedition (2009-2013) has enabled the collection of plankton samples in all of the world's oceans on board the schooner Tara, and the creation of catalogues of species and genes on a scale never before undertaken.

Continuing the analysis and exploitation of the biggest database compiled on the planktonic ecosystem, the teams from the CEA, CNRS (French National Centre for Scientific Research), EMBL (European Molecular Biology Laboratory) and the French graduate school ENS, among others, have just reached a new milestone by analysing the expression of over 100 million genes belonging to complex organisms, from microscopic algae to small planktonic animals. These teams have demonstrated that very different genes express themselves depending on the water temperature or the concentration in nutrients of the oceanic areas studied. Half of these genes are unknown, indicating that the ocean - which is already a marvellous breeding ground of biodiversity - harbours, at the same time, an enormous potential of genetic functions awaiting discovery. By using isolation and characterisation methods of isolated cells, the researchers have, more specifically, been able to explore the role of the genes present in a little-studied, uncultivated but very abundant compartment of the plankton - the first link in a long food chain. These results are the subject of two articles published in the journal Nature Communications of 22 and 25 January 2018.

Plankton is made up of very different organisms, the most simple of which (bacteria, viruses) are starting to be genetically recognised thanks, among other things, to the previous work of Tara Oceans. On the other hand more complex organisms, such as algae, parasites or microscopic animals are far less known, even though they represent the vast majority of ocean species. Plankton, which is the basis of the oceanic food chain, constitutes the largest ecosystem on the plant, and ensures the proper functioning of the biogeochemical cycles that are essential for the survival of organisms, including our own. Made up of millions of different species, the complexity of plankton represents a considerable challenge for the understanding of these flows of matter and energy, on which all terrestrial life depends.

The largest gene catalogue linked to an ecosystem
In order to address this shortcoming and define the conditions of expression of these genes, researchers from the Genoscope at the CEA, the CNRS, EMBL and the ENS, have just created the largest gene catalogue ever compiled for a planetary ecosystem. Comprising around 117 million different sequences, this catalogue has been created thanks to the isolation of the genes expressed in over 400 samples collected during the expedition. This massive DNA sequencing approach without the isolation of organisms is called metatranscriptomic. It has enabled the observation of genes expressing themselves in specific ecological conditions. For example, it makes it possible to demonstrate that numerous organisms use different genetic responses depending on the concentration of iron in the environment. The researchers have been able to determine the genes involved according to the groups of species.

Millions of genes whose role is still unknown
This study also reveals a particularly high proportion of genes whose biological functions remain unknown, and which represent over half of the catalogue obtained. It appears that these genes - with no defined function - express themselves first and foremost in a small number of environmental conditions. They could provide a functional explanation of the immense diversity of the organisms observed in the oceanic plankton.

Which genes for which life functions?
Even though the function of the planktonic genes can henceforth be studied globally using this catalogue, the organisms to which they belong still remain to be identified. In a second article, the Tara Oceans researchers characterise the genomes of several major organisms in the environment but which, for the moment, are impossible to cultivate. Individual cells were sampled and preserved during the expedition, and their DNA was sequenced using the 'single-cell' genomics methods being developed. Consequently, it has been possible to attribute numerous genes observed in the catalogue to very tiny organisms (less than 20 micrometres) feeding off algae and bacteria, and forming a fundamental intermediary stage in the food chain. This analysis has revealed a diversity of unexpected functions, an indicator of the specialisation within this compartment of the plankton.

How has the ocean evolved, how does it work?
Thanks to this work, small organisms that are more complex than the bacteria that form most of oceanic plankton are beginning to be unveiled. It opens up numerous opportunities to understand oceanic ecology with the help of sentinel genes. Among other things, it is becoming possible to study the major biogeochemical processes of the ocean based on the expression of these markers. Finally, an understanding of the evolutionary and ecological mechanisms of the ocean ecosystem now seems within the reach of research, by using all of the resources in species, genes and expressed genes provided by Tara Oceans.

From genes to major physical equilibria
Put in place by the 22 laboratories involved - and mainly attached to the CEA, CNRS, EMBL, ENS - and the Tara Expeditions Foundation, Tara Oceans is continuing to provide major elements to describe the role of the ocean in the global climate 'machine'. In order to connect the oceanic genes to global physical phenomena such as the climate, the researchers still need to understand in which conditions the genes express themselves or not, and to which organisms they belong. The horizons opened up by this expedition are ever-broadening.

The Tara Expeditions Foundation has been active since 2003 in favor of the environment and research, thanks to the legendary schooner Tara, built for extreme conditions. Expeditions are organized to study the impacts of climate change and the ecological crisis on the oceans. Our work involves raising environmental awareness of the general public and especially young people. The Tara Expeditions Foundation has also developed an advocacy campaign to mobilize people and encourage decision makers to take concrete steps towards finding the solutions we need for the planet.