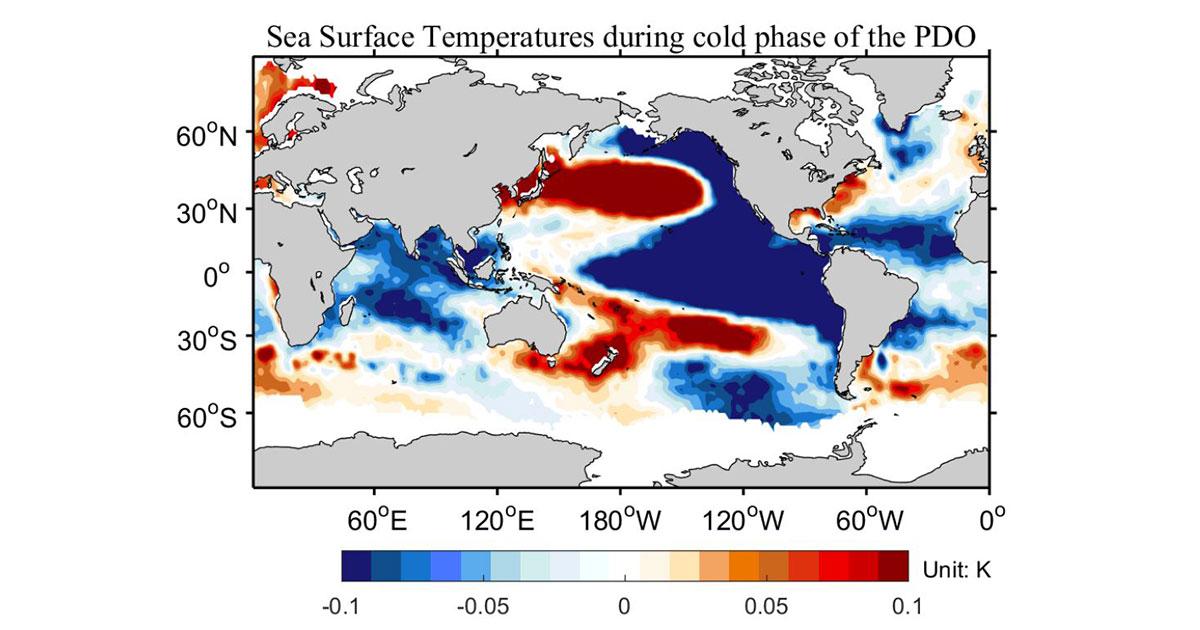 According to Australia’s Commonwealth Scientific and Industrial Research Organisation

(CSIRO), research has found global warming will make it more difficult to predict multi-year global climate variations, a consequence of changes to long-term climate variability patterns in the Pacific Ocean.

The results, published 17 December 2019 in Nature Climate Change, shed light on how the Pacific Decadal Oscillation (PDO) was responding to a changing climate, with implications for assessing multi-year risks to marine ecosystems, fisheries and agriculture.

The PDO is a decadal-spanning pattern of Pacific climate variability, operating in the Pacific Ocean, and exerting a substantial influence on global climate and marine conditions from the US and Japan to Australia and New Zealand.

The PDO has two phases, cold and warm.

During a PDO cold phase, the tropical Pacific Ocean temperatures are lower, and Australia's decadal rainfall tends to be above average.

Under warm phases, the opposite occurs, with below average rainfall.

The PDO also modulates climate variations such as El Niño, which causes warm and dry conditions north west and east of Australia and is associated with heightened risk of bushfire and drought.

"With a less predictable PDO, it may be more difficult to predict the likely impact of El Niño."

The research found that the PDO would become less predictable as the planet warms, because warming conditions result in a significantly shortened PDO lifespan.

Rossby waves, an underwater wave feature, move faster in more stratified waters, which shortens the PDO lifespan further and reduces the time it has to gain strength and intensity.

Using various greenhouse gas emissions scenarios, researchers found that the predictability of the PDO sharply declined depending on the intensity of warming.

Elevated sea surface temperatures can stimulate high production in fisheries, but may negatively affect other ecosystems through marine heatwaves and coral bleaching.

The results pose a challenge for predicting regional climates on multi-year timescales, as well as year-on-year climate variability.

"In our current climate, we can potentially predict the PDO approximately eight years ahead. That lead time will likely be reduced to three years by the end of the 21st century," Dr Cai said.

The ability to accurately forecast the PDO helps decision-makers understand and plan for warm and cold oceanic conditions.

This knowledge can be used by fisheries and aquaculture sectors to manage production risks associated with these conditions, and likewise can support strategic and investment scale decisions by these sectors, as well as insurers, especially in assessing multi-year risks.

Long-term forecasts can also assist in planning conservation actions and harvesting levels that build the resilience of marine ecosystems to biological changes associated with environmental conditions.

"Because the Pacific Decadal Oscillation can span for some time -- from a season, six months, or up to a decade or even more -- the ability to predict changes to marine ecosystems on these timescales can help plan responses to shifts in fish distribution or abundance," Dr Cai said.

"The findings will help us to mitigate the negative impact of greenhouse warming on the PDO. The next step will be to improve model systems to fully realise the potential predictability of the PDO," Dr Cai said.

"Many people are familiar with the role that the El Niño-Southern Oscillation plays in climate but might be surprised that there are bigger forces at play like the PDO, which influences our marine environment, as well as climate extremes."

The Centre for Southern Hemisphere Oceans Research is a $20 million five-year collaboration between CSIRO, Qingdao National Laboratory for Marine Science and Technology with the University of Tasmania and University of New South Wales.