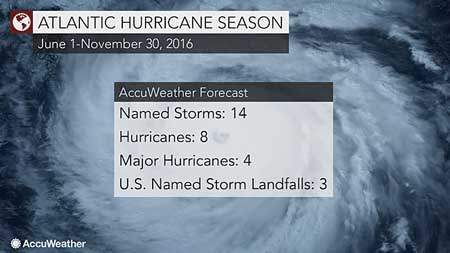 AccuWeather reports the potential movement of a 'cold blob' of water in the North Atlantic Ocean may be the wild card in the 2016 Atlantic hurricane season, experts say.

The cold blob refers to a large, anomalous area of colder-than-normal sea-surface temperatures, located east of Newfoundland and south of Greenland.

"This area of colder water started to show up a few years ago and has become larger and more persistent during the past couple of years," AccuWeather Atlantic Hurricane Expert Dan Kottlowski said. 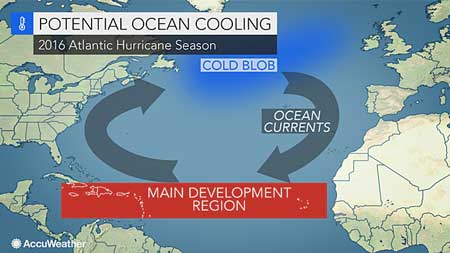 Whether or not ocean currents draw cold water from this blob southward into tropical regions of the Atlantic could determine how active the season becomes.

With all potential factors in mind, forecasters are predicting that tropical storms and hurricanes in the Atlantic will total 14 this season, two more than what is considered normal.

If the cooler water migrates southward across the eastern Atlantic, then westward into tropical breeding grounds, it will lower sea-surface temperatures over the region where 85 percent of Atlantic tropical systems develop.

Another possibility is that the water from the cold blob could alter the makeup of deep ocean currents and affect the salinity of the water.

If this happens, the pattern of warming waters that has been occurring since 1995 will reverse, leading to a period of cooling.

Either of these scenarios would limit tropical development in the Atlantic.

If these scenarios don't occur, sea-surface temperatures will remain mostly warmer than normal, likely resulting in a season more active than in the past three years.

Should this be the case, experts believe the current El Niño will weaken, eventually leading to a neutral pattern by the end of the spring or early summer.

"The big question is whether we will go into a La Niña, which is what we're anticipating right now," Kottlowski said.

La Niña is characterized by cooler-than-normal ocean water temperatures in the Pacific Ocean near the equator.

When this occurs, less wind shear is found in the developmental regions of the Atlantic, increasing the potential for a higher-than-normal amount of tropical systems.

"Historically, some hurricane seasons that have followed a transition from El Niño to La Niña have been very active. It's possible we could flip from one extreme to the other, from below-normal seasons the past three years to an above-normal year in 2016," he said.