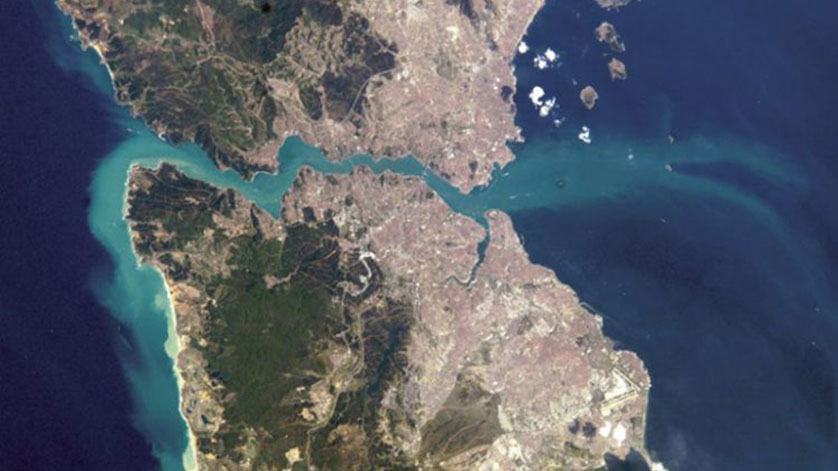 For the first time, scientists provide a sea-wide view of what happens to Mediterranean waters that flow into the Black Sea through the Bosporus Strait.

Below a depth of about 150 meters, the Black Sea is devoid of oxygen. Only certain microbes can survive in this "dead zone," which reaches depths of over 2000 meters. Warm, salty water flowing from the Mediterranean Sea into the Black Sea ventilates the middepth water column of the sea, trapping anoxic water below and maintaining the sea's distinctive structure. However, the precise fate of inflowing Mediterranean waters has remained something of a mystery to scientists.

In a new study, Falina et al. present the first sea-wide overview of the behavior of Mediterranean waters in the Black Sea. They track the path of the newly arrived water and investigate what happens when strong winds impact incoming flow.

To track the size and location of these Mediterranean plumes throughout the Black Sea, the authors relied on the tendency of the plumes to stay warmer than surrounding waters. The researchers compiled temperature, depth, and salinity data collected from aboard three ships as well as by a network of autonomous instruments known as Argo floats. The entire data set covered 657 locations from 2005 to 2009. 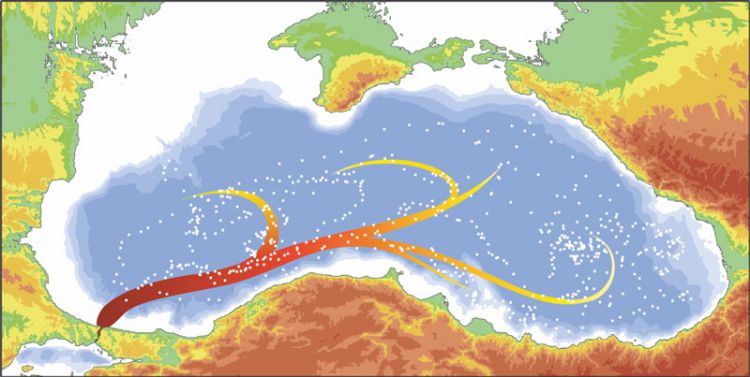 Pathways of Mediterranean plumes in the middepth layer of the Black Sea as inferred from ship and float data (white dots). While being carried by the currents from the Bosporus, warm plumes gradually cool because of mixing and become indistinguishable from the Black Sea’s waters within a year. Credit: Anastasia Falina, Artem Sarafanov

The data revealed that after strong storms over the Bosporus Strait, Mediterranean plumes propagate throughout the main part of the sea, covering much more area than previously thought. The Rim Current, which transports upper and middepth waters counterclockwise around the entire Black Sea, carries the plumes along, delivering them after several months to interior gyres in the eastern and western parts of the sea.

During these strong storms, powerful winds are known to thrust water in the strait northward, dramatically increasing the amount of Mediterranean water entering the Black Sea. The scientists hypothesize that this results in the formation of abnormally large, warm plumes that propagate throughout the sea. Mixing makes the plumes undetectable in less than a year.

These findings could help improve understanding of the Black Sea's dead zone. They could also contribute to the study of other water systems that feature oxygen-free layers, including fjords, the Baltic Sea, and Cariaco Basin. (Journal of Geophysical Research: Oceans, doi.org/10.1002/2017JC012729, 2017)