SEA-KIT International’s Uncrewed Surface Vessel (USV) Maxlimer has returned from an initial survey mission inside the caldera of the Hunga- Tonga Hunga-Ha'apai (HT–HH) volcano carrying a plethora of data and imagery to fill important gaps in current understanding and knowledge of the seamount and water above it.

For the ongoing second phase of the NIWA/Nippon Foundation Tonga Eruption Seabed Mapping Project – TESMaP, funded by The Nippon Foundation, USV Maxlimer is equipped with a Multibeam Echo Sounder (MBES) to acoustically measure depth and state of the seabed. Importantly, the vessel also has new winch capability for deployment of multiple sensors down to 300 meters to obtain direct water column measurements.

Data collected using a Conductivity Temp Depth (CTD) instrument, deployed using the winch, is providing important temperature and salinity information as well as dissolved oxygen and turbidity readings. A Miniature Autonomous Plume Recorder (MAPR), designed to detect chemicals in the water that are common in hydrothermal plumes, is recording light- backscattering for suspended particle concentrations, oxidation reduction potential, temperature and pressure from multiple winch dips and tows. The MAPR project is a joint initiative between NOAA in the USA and GNS Science in New Zealand.

On this survey mission, clear signs of continuing volcanic activity were seen inside the crater, with high particle concentrations in the water that are consistent with earlier observations of ash in the water column. The water in the caldera was also found to be homogenous between 150- and 300-meters depth, suggesting strong mixing inside the caldera. The previously observed oxygen minimum was not as distinct. 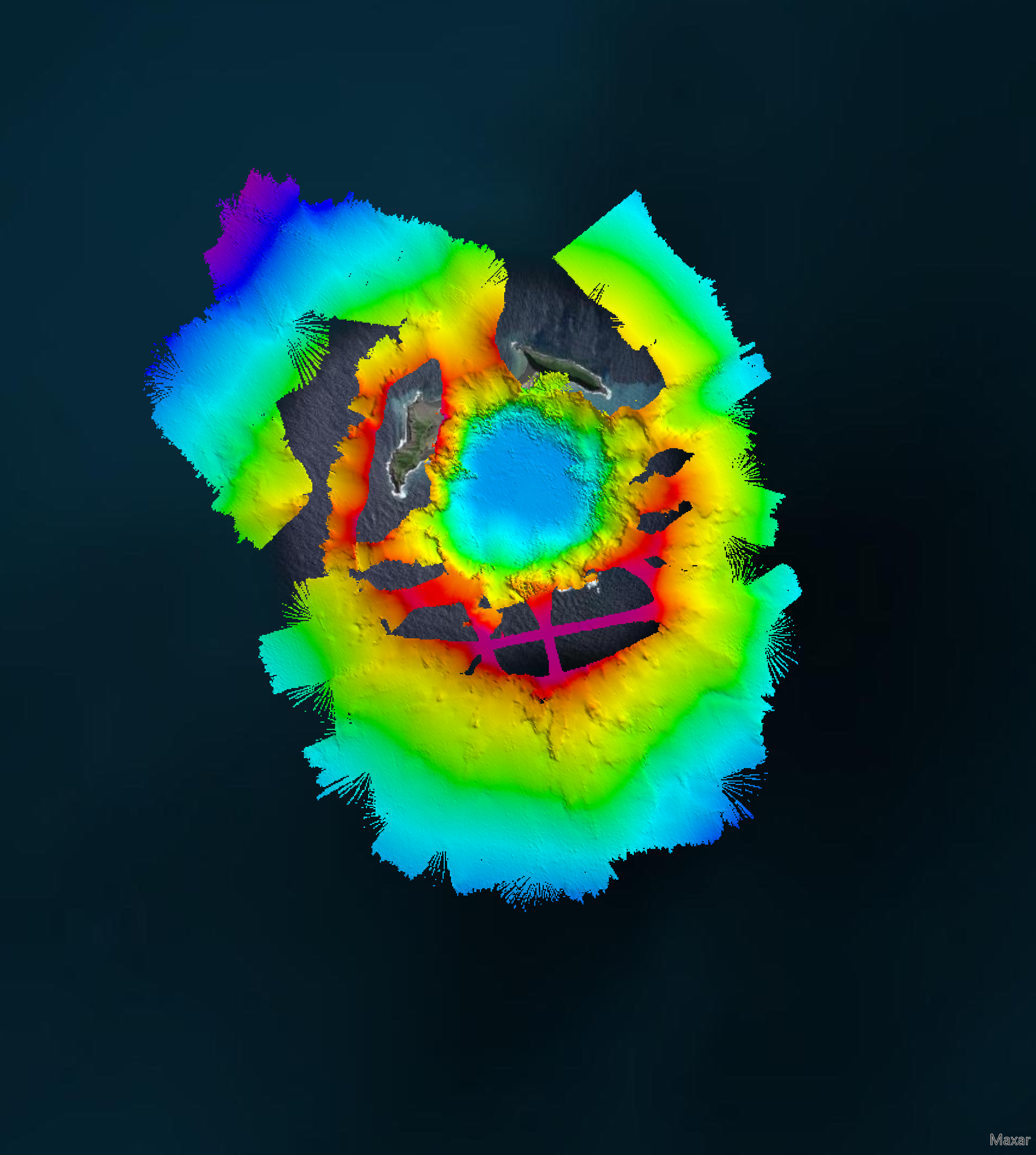 Sharon Walker, Oceanographer at NOAA’s Pacific Marine Environmental Laboratory said: “Early data shows ongoing activity within the caldera, though it is too early to tell if it is due to continuing eruption but at a reduced intensity, or hydrothermal venting driven by cooling lava, or both.”

Maxlimer is returning to the caldera this week for a more detailed survey to fill gaps and better target volcanic plumes and hydrothermal vents with the CTD and MAPR.

Dr. Mike Williams, Chief Scientist-Oceans at NIWA said: “The primary objective of phase 2 is to map the caldera and the hydrothermal vents within it and Maxlimer is crucial in achieving that. It is incredibly exciting to be able to look down into the caldera and see volcanic plumes. We now know that at its deepest point it is around 850 meters deep, so more than the height of two and a half Eiffel Towers. The data and imagery that Maxlimer has brought back is astounding and is helping us to see how the volcano has changed since the eruption.”

The 12-meter USV is being remotely controlled on its caldera missions from SEA-KIT’s base in Essex, United Kingdom, where a team of four operators work shifts for round-the-clock operation. A global team of surveyors and scientists based in Australia, Egypt, Ireland, Mauritius, New Zealand, Poland and the USA are collaboratively monitoring and reviewing the data collected.

The UK’s Maritime Minister, Robert Courts, said: “I’m delighted that maritime technologies produced here in the UK are being used to understand the effects of the tragic Tonga volcanic eruption, all whilst being controlled remotely 16,000 kilometers away in the UK. This research will help protect the 680 million people living in coastal areas by providing a better prediction of similar natural disasters in the future and ensure that we are prepared if this does happen again.”

USV Maxlimer is also scheduled to map areas where telecommunications cables were damaged following HT–HH’s violent eruption in January 2022. During Phase 1 of the project, the crew of NIWA’s research vessel, RV Tangaroa, discovered that the severed domestic internet cable was buried under 30 meters of ash and sediment. Project and local stakeholders hope to gain a better understanding of the extent of the damage and how it was caused - likely due to fast-moving pyroclastic flows – from Phase 2. SEA-KIT’s USV may also be deployed to survey alternative sites suitable for replacement cables if needed before returning to the UK.

Ben Simpson, SEA-KIT CEO, said: “Maxlimer was the first SEA-KIT X-class USV to be built. There are now numerous X-class vessels working commercially around the world, but this project clearly demonstrates how crucial this technology is as a low-risk, non-invasive solution to reach, survey and understand places that are challenging or unsafe for people to access. Maxlimer experienced 3-meter seas on return from this first mission, which proves yet again how robust the design is. Demonstrating that this kind of work can be done using less than 2% of the fuel of a typical survey vessel is also a significant step on the industry’s path towards net zero emissions.”

Knowledge gained from the project will be invaluable to the Tongan authorities in preparing and planning for future possible eruptions.

The Nippon Foundation’s Executive Director Mitsuyuki Unno said: “Maxlimer’s technology has enabled our Nippon Foundation-GEBCO alumni to not only gain hands-on experience but also to come together as a team. We look forward to sharing the results of this voyage in the coming months and to exploring ways in which the findings can benefit the people of Tonga.”

Lucy Joyce, British High Commissioner to the Kingdom of Tonga, said: “I’m delighted to see SEA-KIT’s Maxlimer Uncrewed Surface Vessel working here in Tonga. The assessment of the Hunga-Tonga Hunga-Ha’apai caldera and the waters and seabed around it is of huge interest and importance to all of us here in Tonga who lived through the huge explosion and tsunami in January.”

Seabed data gathered by USV Maxlimer will also be contributed to The Nippon Foundation- GEBCO Seabed 2030 Project, a United Nations Ocean Decade endorsed program, which aims to map the entire ocean floor by 2030.

Jamie McMichael-Phillips, Seabed 2030 Project Director, said: “The use of USVs is paramount to Seabed 2030’s mission of a complete map of the entire ocean floor. By surveying areas that may not be accessed by personnel for safety reasons, USVs, such as SEA-KIT’s Maxlimer, will greatly assist us in our ambitious goal.”

Findings from the TESMaP project will be presented at the American Geophysical Union (AGU) Fall Meeting in Chicago this December, a highly influential event dedicated to the advancement of Earth and space sciences.