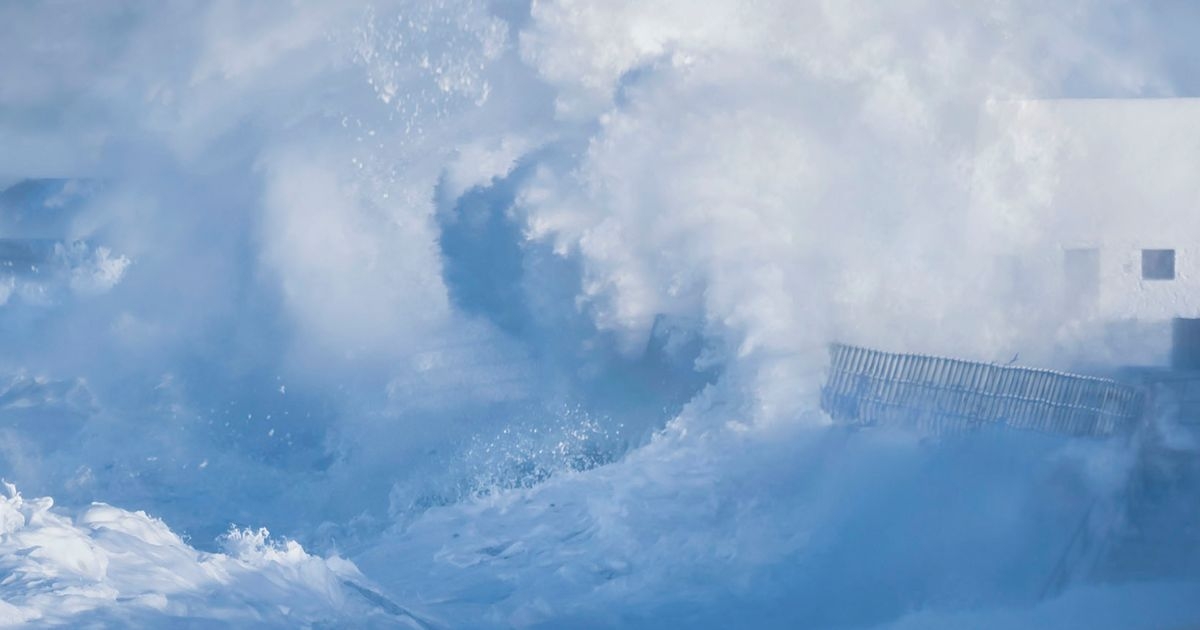 When Hurricane Katrina made landfall in Louisiana, it wasn’t the wind that created one of the costliest natural disasters in history; the real damage and loss of life was caused by flooding due to Katrina’s storm surge, which drowned the region in water for weeks.

Total damages from Hurricane Katrina are estimated at $135 billion, and 40% of all deaths were due to drowning (Plyer 2016).

Storm surge flooding is predicted using numerical models, and ocean mapping provides the boundary condition for these models. However, only about 35% of the United States’ 95,471 miles of coastal waters have been mapped with modern methods. Higher resolution, more precise models, need modern, high-quality bathymetry, otherwise, the model may over or under predict the surge leaving communities vulnerable and local authorities unprepared.

Coastal storm surge is an abnormal rise of water generated by a hurricane, over and above the predicted astronomical tide. More than 127 million people live in coastal counties in the US, and much of the country’s densely populated Atlantic and Gulf Coast coastlines lie less than 10 feet above mean sea level.  ‍ 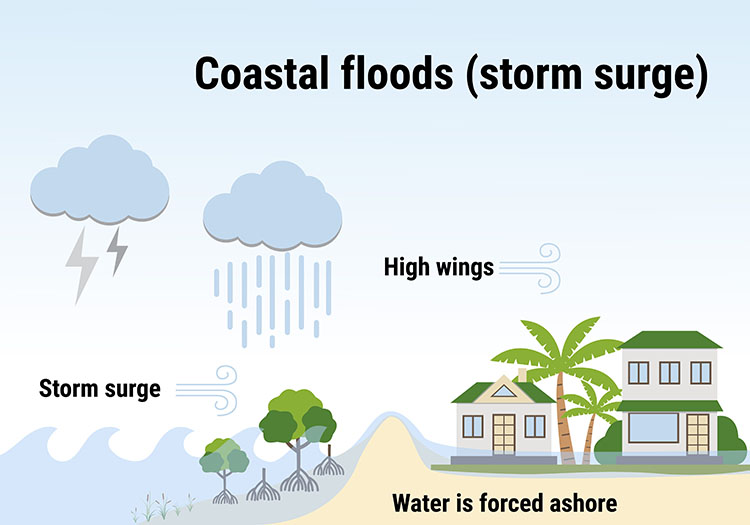 Advancing surge combined with normal tides can increase the water level by 30 feet or more, not only affecting beachfront communities but extending many miles inland in low-lying areas. As storms like Katrina have demonstrated, storm surges can have a devastating impact on these coastal communities. A storm surge of only 23 feet can inundate 67% of interstates, 57% of arterials, almost half of all railroad tracks, 29 airports, and virtually all ports in the Gulf Coast area. 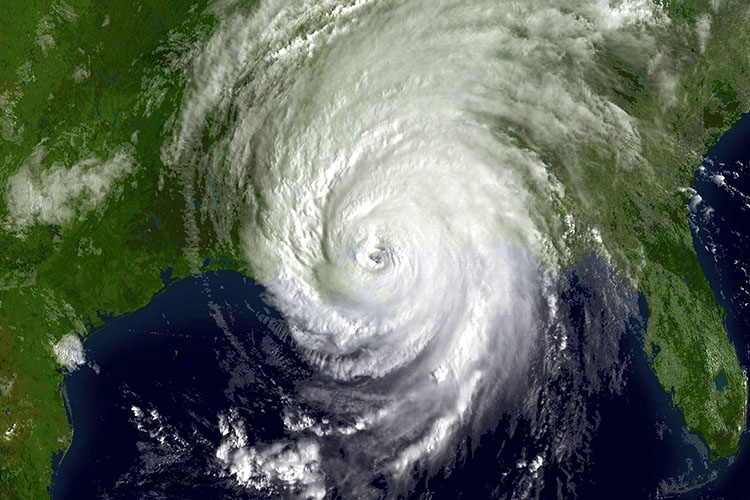 Hurricane Katrina actually weakened from a category 5 to a category 3 hurricane shortly before it hit the Louisiana coast, however its hurricane strength winds extended some 200 miles in diameter. Photo: NOAA/NASA GOES Project.

Wind speed does contribute to the severity of storm surge, but it’s not the only factor—Hurricane Katrina was only a Category 3 storm when it made landfall in Louisiana, but it produced a 28-foot storm surge with catastrophic damage. Hurricane Ike was only a Category 2 storm when it made landfall near Galveston, TX, but storm surges of 20 feet above normal tide levels caused an estimated $24.9 billion. Other significant factors include the forward speed of the storm, the topography of the coast, and the width and slope of the ocean bottom. The coastal zone, the interface between land and sea, is the most expensive and time-intensive place to map. It is also the area most subject to change due to wave action, storms, downflow, and sedimentation, and it’s the area most susceptible to rising sea levels. High-resolution ocean mapping gives us the ability to predict where water will flow and how storm energy will be dissipated by the bathymetry of the seafloor and topography of the coast. 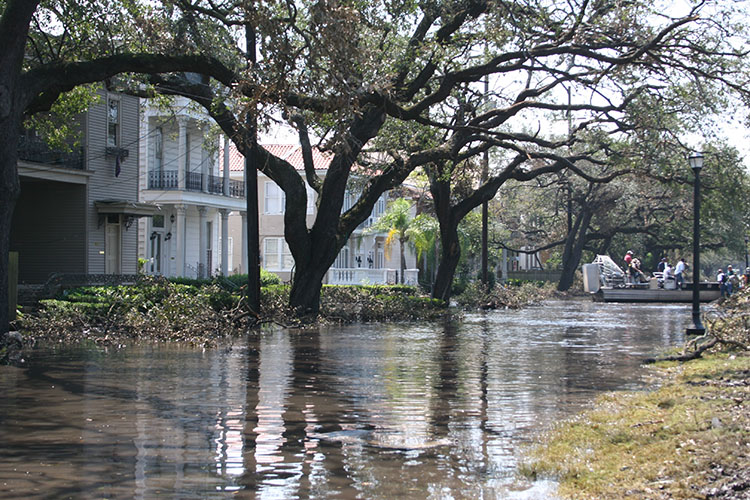 The biggest impact of Hurricane Katrina came not from its winds, but from its large size and significant storm surge. Photo: Bernard/stock.adobe.com.

“New high-resolution maps of the seafloor are essential to help coastal communities protect their citizens from dangerous storm surge events and reduce costly flood damage. Uncrewed systems can do far more at far lower costs than traditional approaches. We are confident that modern ocean mapping and a better understanding of the landscape beneath the ocean will help protect human health and infrastructure,” said Brian Connon, Saildrone VP Ocean Mapping.

Saildrone has a strong interest in the Tropical Atlantic Ocean and Gulf of Mexico and has already operated several missions in the region. Saildrone began testing USVs equipped for shallow water multibeam mapping in the Gulf of Mexico in 2019. During the mission, one vehicle discovered a shipwreck that had never been included on any chart. In September 2021, the Saildrone Explorer SD 1045 made global headlines for capturing the world’s first video from inside a category 4 hurricane, while collecting critical data to help scientists understand hurricane intensification. 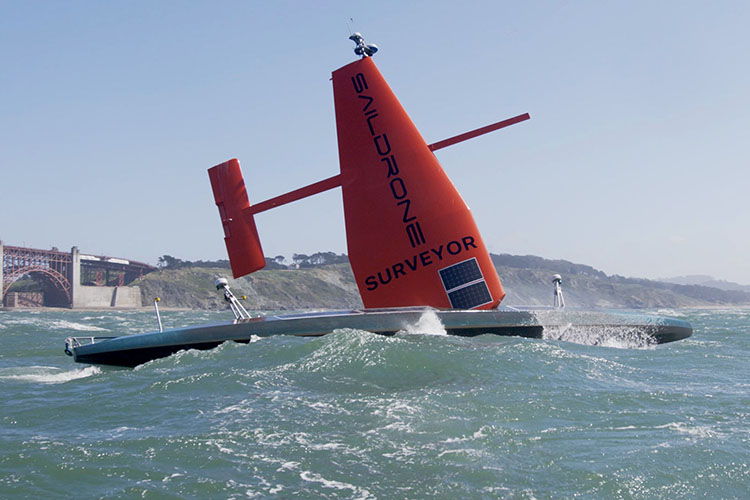 The Saildrone Surveyor carries the same cutting-edge sonar equipment as a traditional survey ship, but operates at a fraction of the coast and carbon footprint.

The Saildrone Surveyor, a 72-foot USV optimized for deep-ocean multibeam bathymetry, was recognized with an Innovation Award from the Blue Marine Foundation for revolutionizing ocean mapping. The Surveyor carries the same cutting-edge sonar equipment as traditional survey ships to deliver high-resolution data to the global community but operates at a fraction of the cost and carbon footprint.

The newest addition to the Saildrone fleet is the 33-foot Voyager. Predominately powered by wind for forward propulsion, the Voyager is also equipped with a high-efficiency diesel engine for speed and maneuverability in light winds making it ideal for near-shore operations. It carries an impressive payload for long-duration IHO-compliant ocean mapping. The Norbit Winghead i80 high-resolution shallow-water mapping system provides data at .65 feet – 985 feet (0.2 m – 300 m) depth below the keel.

Saildrone USVs are not single-operation vehicles; they are capable of collecting data for a variety of mission objectives at the same time. While the echo sounder conducts surveys under the water, sensors at or above the sea surface collect valuable data for climate science and weather forecasting. Saildrones operate day and night in rough sea conditions that most vessels would avoid, and in shallow areas that are both dangerous and too expensive for ships to survey.

The ocean floor is in constant motion. Currents transport sediment and biomass along the ocean floor changing the local topography. In addition to forecasting storm surge, a comprehensive map of the ocean floor will improve wave modeling and tsunami prediction and provide a better understanding of our natural resources. The ocean must be accurately and repeatedly mapped to fully understand these important processes to protect our coastal communities and grow our blue economy.