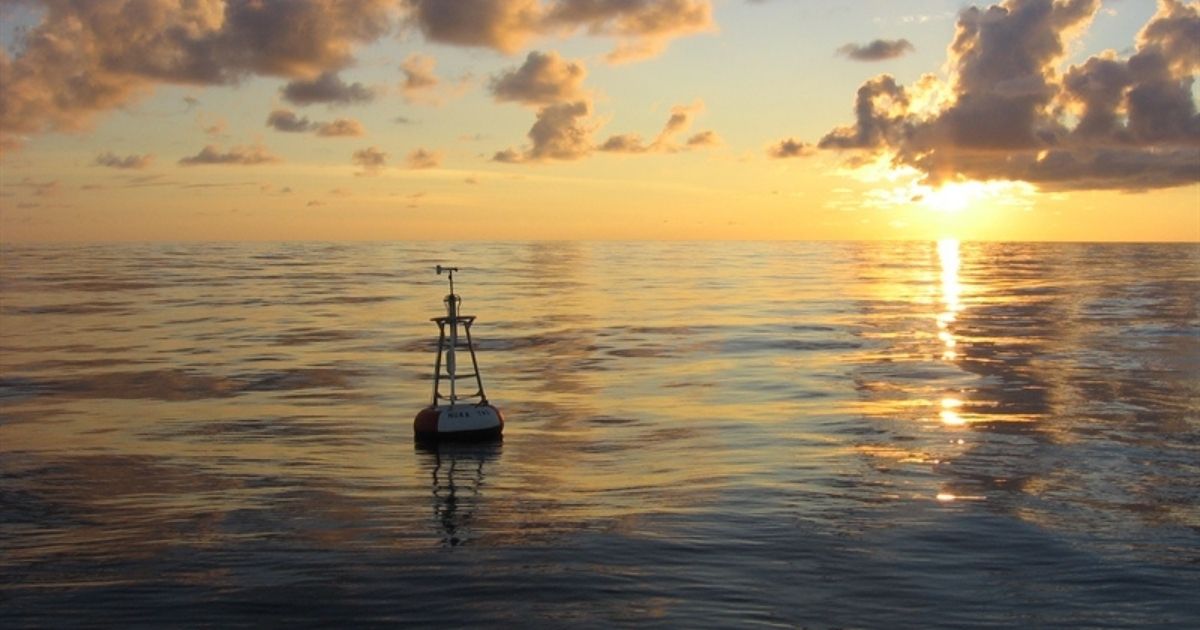 Keeping track of ocean health is critical for understanding climate change, weather patterns, and the health of important fisheries. But how do NOAA and partner scientists gather data on such a vast environment?

One big way is with buoys, ocean observing platforms that help scientists monitor the global ocean — including in remote, hard-to-reach areas. Some of these buoys float along the ocean surface, gathering data as they drift with currents (sometimes even into the paths of hurricanes!). Some, meanwhile, are moored to the ocean floor, collecting data in the same region and helping scientists observe changes over several years or decades. In honor of Ocean Month, NOAA is highlighting five buoys that help NOAA scientists monitor and understand the ocean (and the Great Lakes, too!). 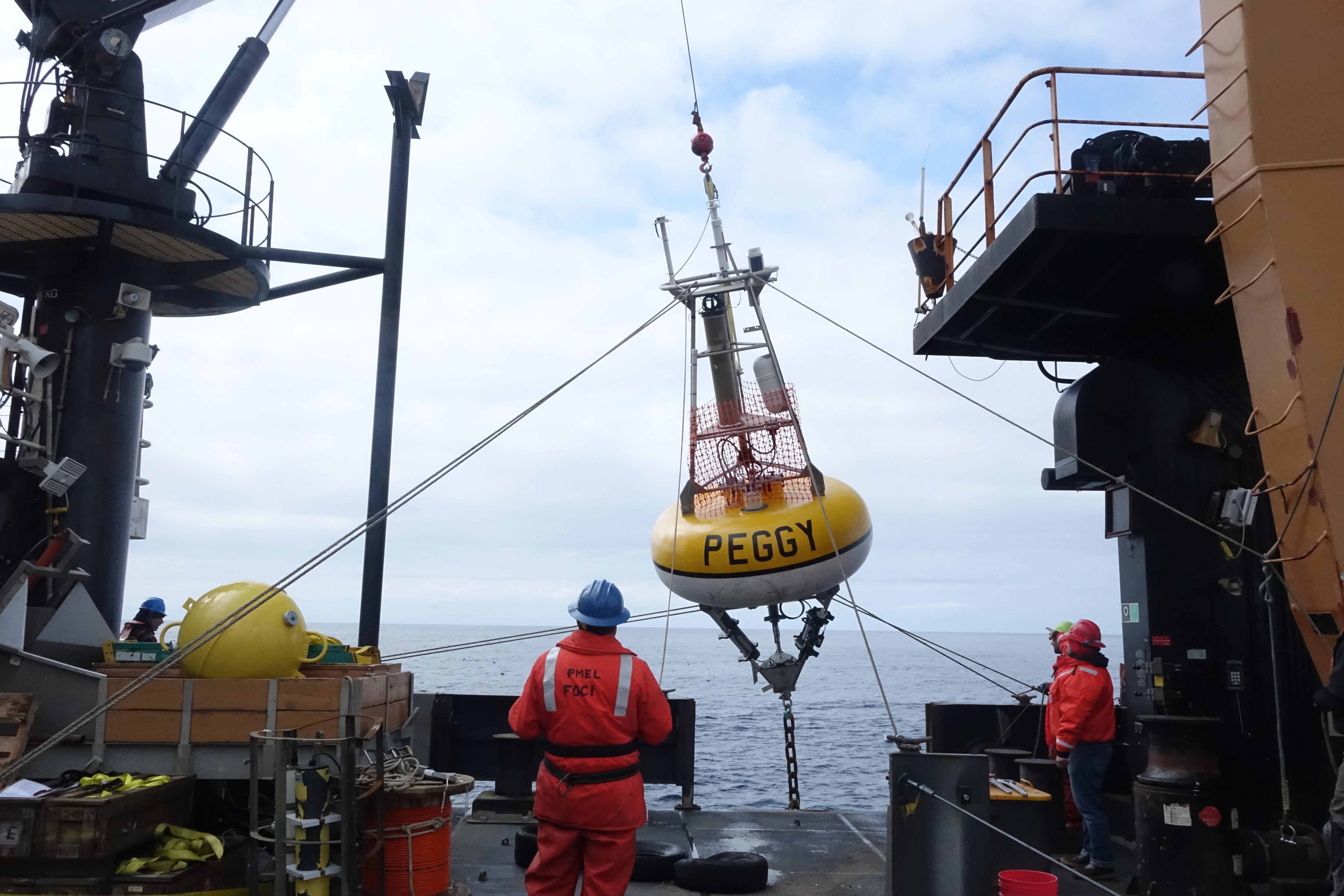 Monitoring the Bering Sea with Peggy

NOAA’s biophysical mooring site 2 — nicknamed “Peggy” — is one tough buoy. Since 1995, Peggy has been taking year-round measurements of temperature, salt content, nitrate, chlorophyll and currents in the remote Bering Sea. Data collected by Peggy has been used by scientists to study the cold pool and loss of sea ice in the Bering Sea, a region that supports large marine mammal and bird populations and some of the most profitable and sustainable commercial fisheries in the United States. Peggy is named for Peggy Dyson, who for 25 years, from her home in Kodiak, Alaska, reported the weather, family messages, and sometimes even paid bills for the mariners of the North Pacific Ocean. 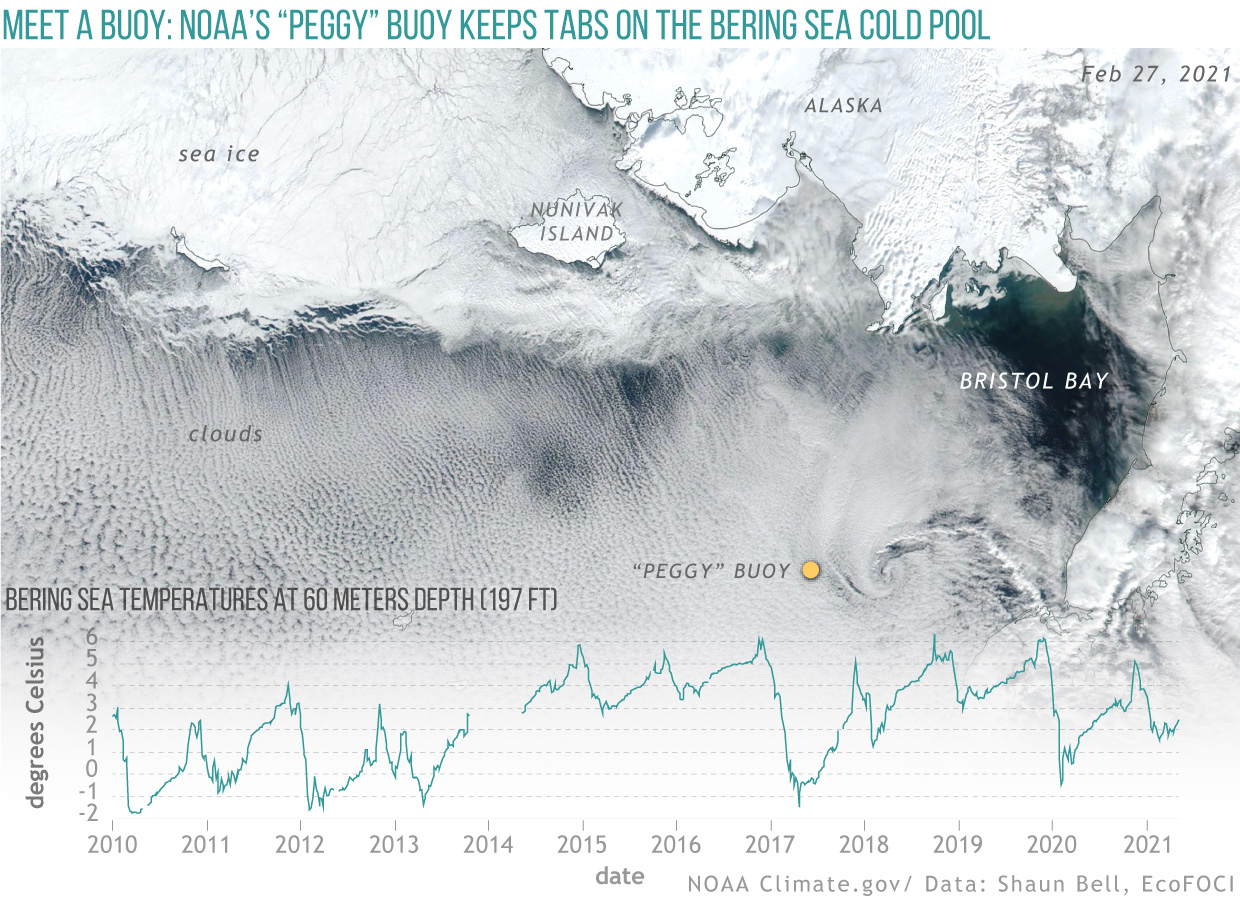 PEGGY'S DATA
NOAA's M2 moored buoy--nicknamed "Peggy"--records water temperatures and other physical and biological data from the surface to the floor of the coastal shelf, giving scientists an important glimpse into the status of the Bering Sea's summer cold pool. This graph shows Peggy's observations of water temperatures near the sea floor (depths of 60 meters, or 197 feet) from 2010 to mid-May 2021. In the early part of the 2010 decade, sub-zero winter temperatures were common. Recent winters have been much warmer. NOAA Climate.gov image, based on NOAA buoy data from EcoFOCI/S. Bell. Background image from NOAA/NASA Suomi NPP satellite on February 27, 2021, via Worldview. Credit: NOAA

Keeping tabs on ocean acidification with the MAPCO2 buoy

The ocean absorbs about 30 percent of the carbon dioxide (CO2) that is released in the atmosphere, and as that CO2 is absorbed, it changes the pH of the ocean. Ocean acidification poses a big risk to marine life — as waters become more acidic, corals have a harder time building their skeletons, oysters and other shellfish have a harder time building their shells, and fish can experience worrisome behavioral changes. 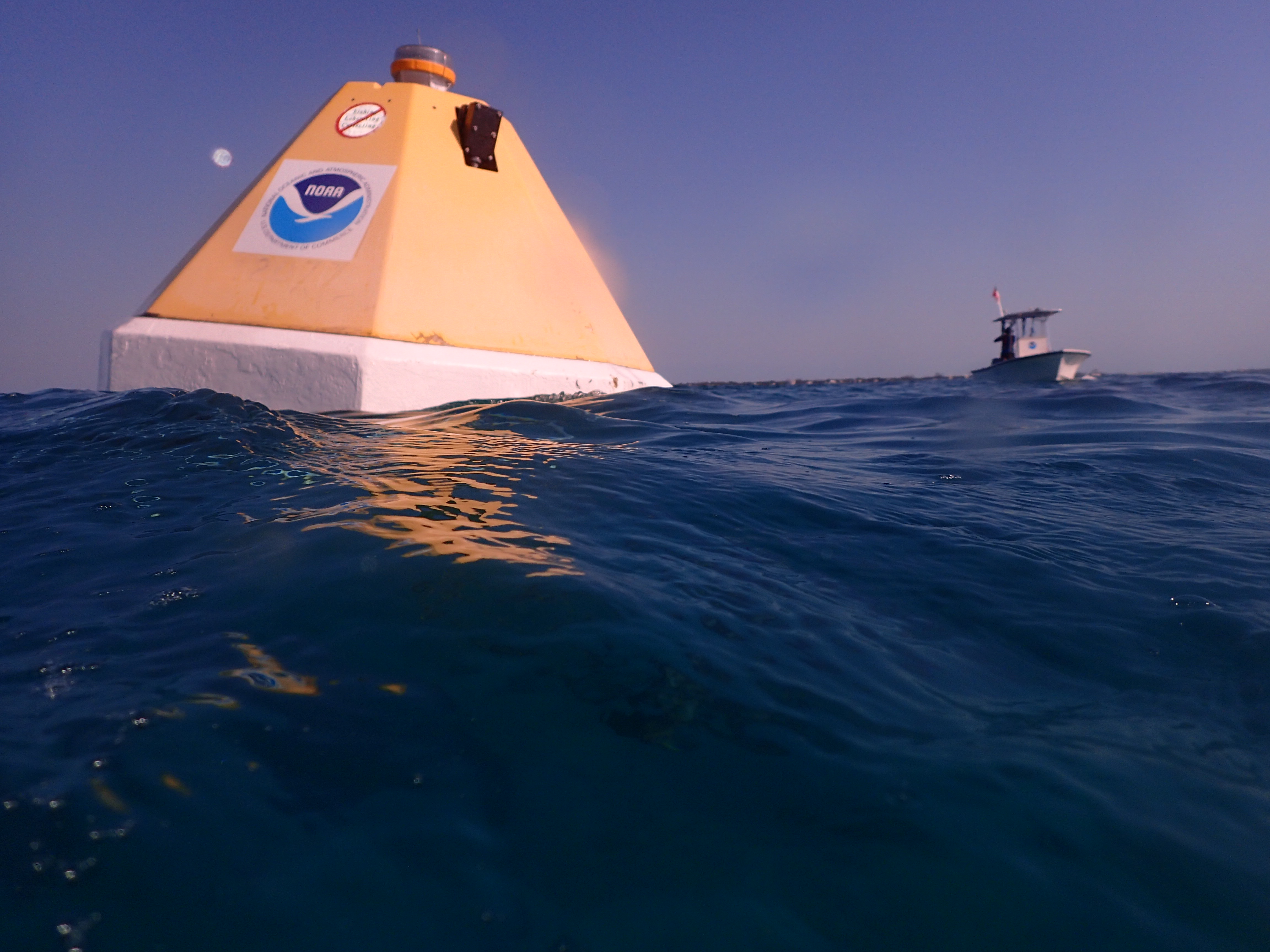 Moored Autonomous pCO2 (MAPCO2) buoys help scientists understand ocean acidification. There are currently 50 of these buoys worldwide, each of which is deployed either over a coral reef, in the open ocean, or in a coastal region. These buoys gather long-term data on carbon dioxide in the ocean, allowing scientists to track how ocean acidification is progressing in different regions.

One of these buoys is deployed at Cheeca Rocks, a coral reef within the Florida Keys National Marine Sanctuary off of Islamorada, Florida Scientists chose Cheeca Rocks because of its important coral habitat, which has managed to stay relatively healthy compared to reefs farther offshore. Scientists have been studying why these inshore patch reefs like Cheeca Rocks have been more resilient to environmental stressors, including coral disease, coral bleaching, and overfishing — and the MAPCO2 buoy helps in that effort. This buoy measures the partial pressure of CO2 (pCO2) in seawater, temperature, salinity, and pH every three hours. The data is open and available to the public. 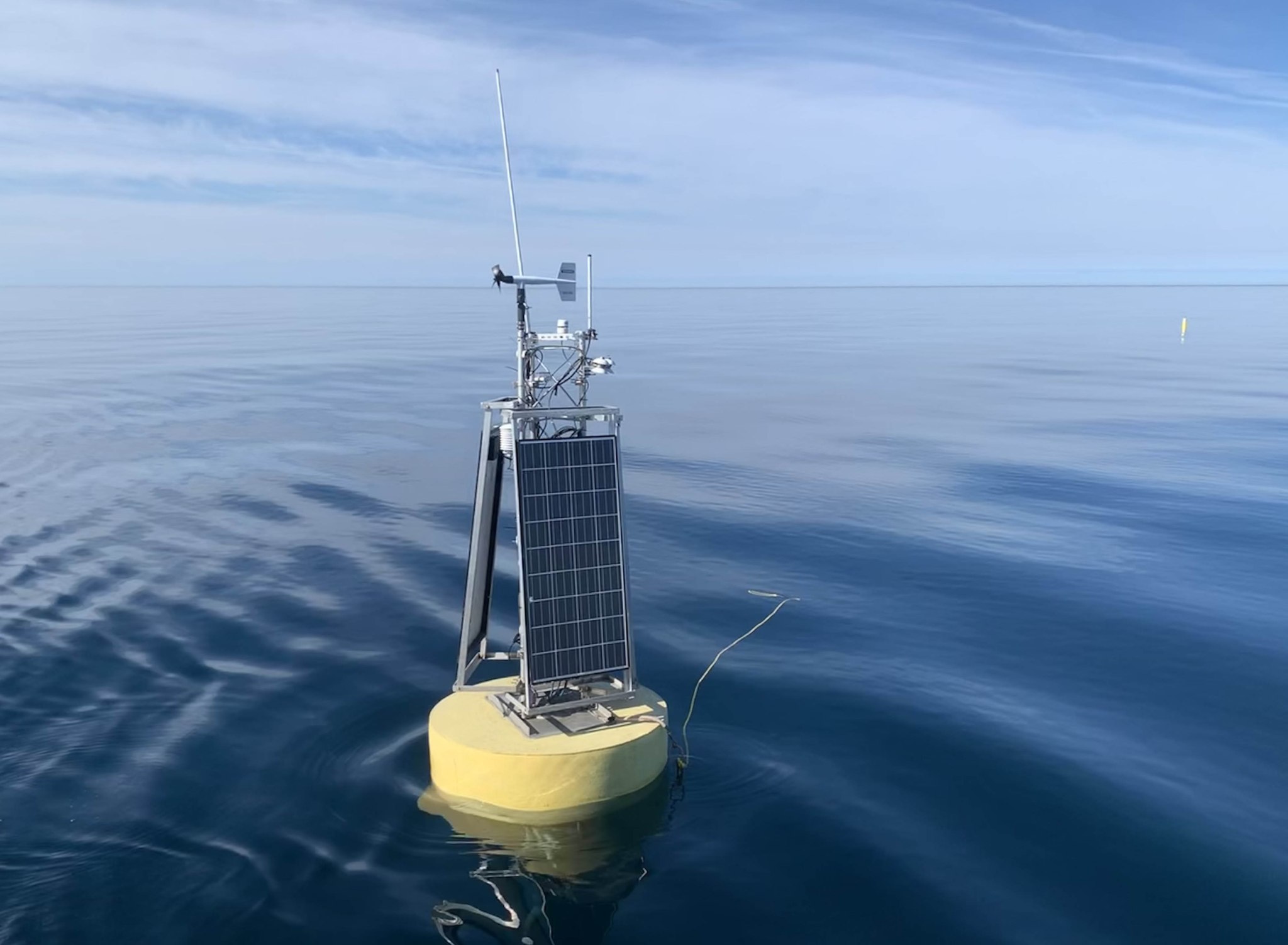 Understanding the Great Lakes with the ReCON buoy

Buoys aren’t just for the ocean! NOAA Great Lakes Environmental Laboratory (GLERL) deploys buoys on the Great Lakes every spring. These 16 Real-Time Coastal Observation Network (ReCON) buoys gather a range of atmospheric and water data in the Great Lakes, including wave height, dissolved oxygen, chlorophyll, and water temperature. Data collected by ReCON buoys can help water managers keep tabs on water safety, warning of potential hypoxic (low-oxygen) events, which can affect drinking water quality. The short-term weather and water data ReCON buoys gather can help the public decide whether to hit the water for a day of boating or fishing, and the long-term data helps resource managers, educators, and researchers better understand Great Lakes health. If you’re planning a day out on the Great Lakes, you can even text a buoy to get information on current wind speeds, water temperature, air temperature and more. Explore Great Lakes buoy data via the NOAA National Centers for Environmental Information data repository.

ReCON buoys aren't the only ones that help scientists monitor water quality and predict harmful algal blooms on the Great Lakes. NOAA works with the Great Lakes Observing System (GLOS), and LimnoTech, a private engineering firm, to build monitoring capacity in central Lake Erie. One LimnoTech buoy, for instance, gathers data on oxygen levels near a water intake in Cleveland, data that’s then incorporated into NOAA models and allows scientists to alert water managers that this low-oxygen water -- which can be dangerous -- is too close to drinking water intakes.

ReCON buoys aren't the only ones that help scientists monitor water quality and predict harmful algal blooms on the Great Lakes. NOAA works with the Great Lakes Observing System (GLOS), and LimnoTech, a private engineering firm, to build monitoring capacity in central Lake Erie. One LimnoTech buoy, for instance, gathers data on oxygen levels near a water intake in Cleveland, data that’s then incorporated into NOAA models and allows scientists to alert water managers that this low-oxygen water -- which can be dangerous -- is too close to drinking water intakes. 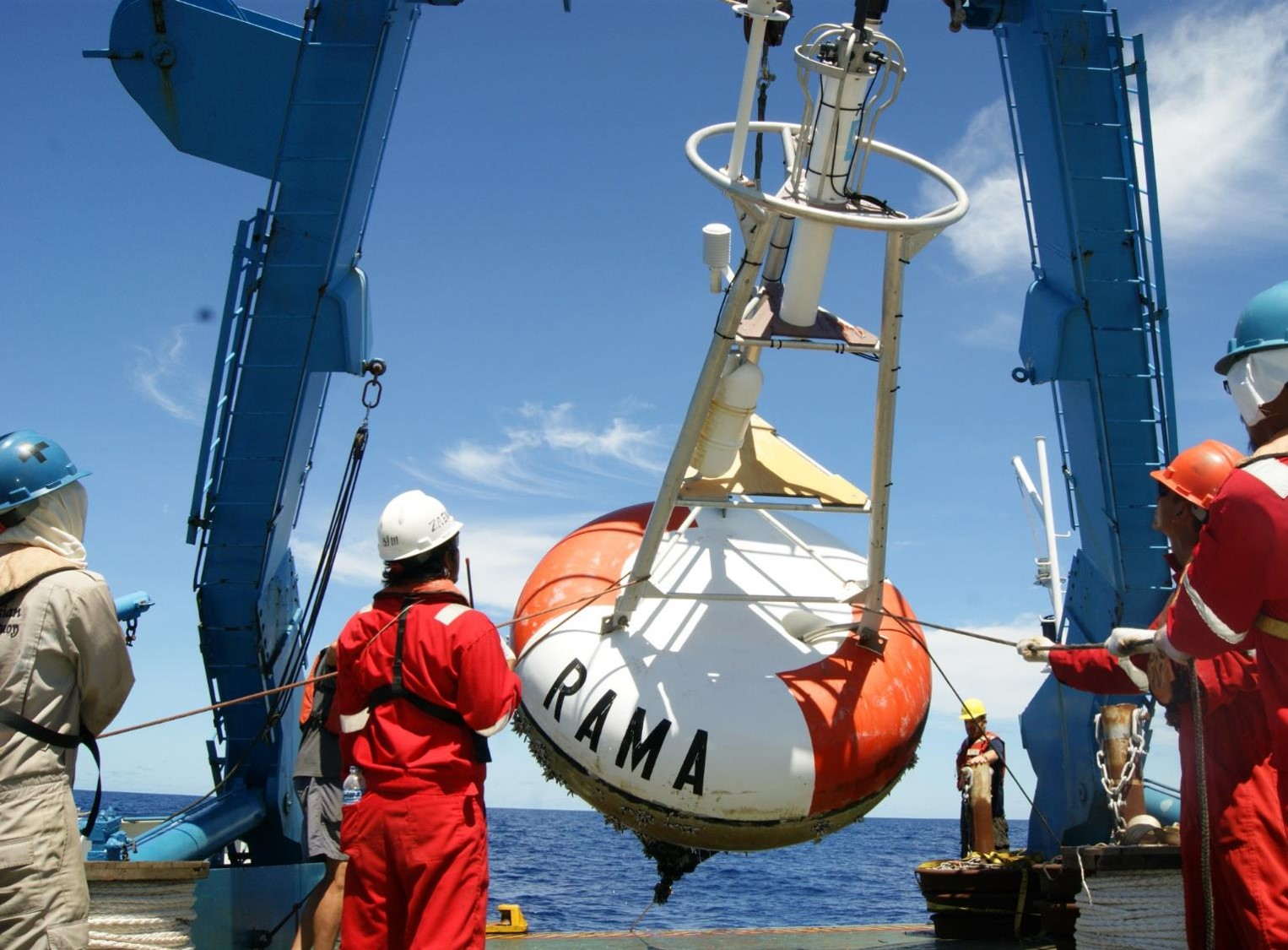 Understanding how the ocean affects monsoons with RAMA

Monsoons are seasonal shifts in wind that can cause heavy rain or droughts in regions from the tropics to the United States. A third of the world population depends on monsoon-driven rainfall for producing crops, so being able to understand and predict monsoons is critical to these populations — especially populations in India, which is primarily impacted by monsoons.

The Research Moored Array for African-Asian-Australian Monsoon Analysis and Prediction (RAMA) was designed to study the Indian Ocean’s role in monsoons and improve monsoon forecasts. RAMA is part of the Global Tropical Moored Buoy Array, which also includes buoy arrays in the Pacific (TAO) and Atlantic (PIRATA) Oceans. RAMA is the newest array of the three, initiated in 2004 to better study the traditionally data-sparse Indian Ocean. RAMA has since grown through the formation of NOAA partnerships with Indonesia and India, and with contributions by Japan, China, and the Bay of Bengal Large Marine Ecosystem program. RAMA buoys collect data on a range of atmospheric and oceanic variables, including ocean temperature, salinity, currents, wind, sea level air pressure and humidity. In 2018 India's Ministry of Earth Sciences announced their Ocean Moored Buoy Network for the Northern Indian Ocean would provide open access data to the new Indian Ocean RAMA-OMNI moored buoy array - meaning even more ocean data is now shared freely among researchers, helping improve the accuracy of forecasts. 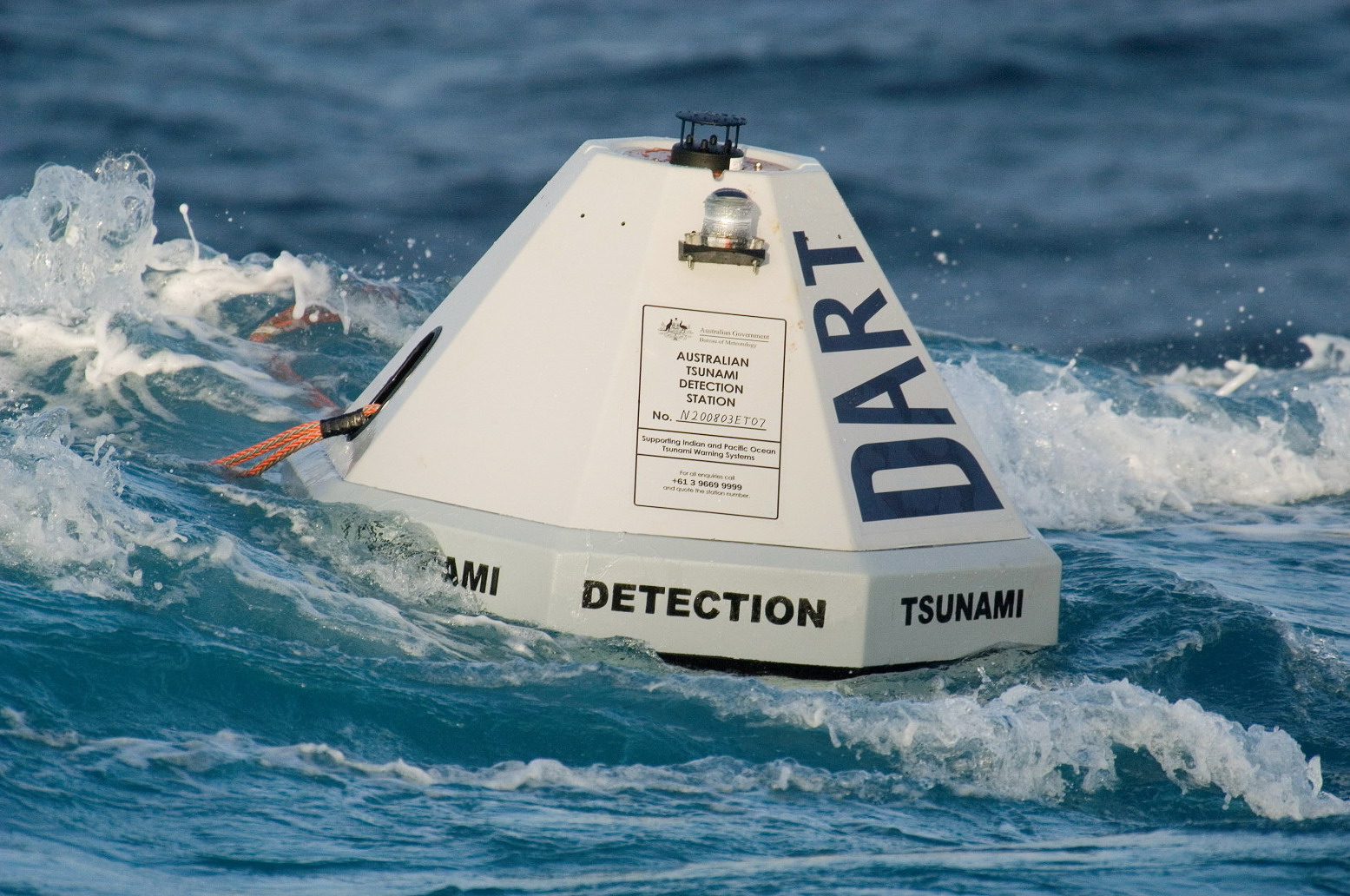 Forecasting tsunamis with the DART Buoy

DART buoys are located strategically throughout the ocean — often close to locations where earthquakes that generate tsunamis are likely to happen - and gather key data on sea surface levels as a tsunami travels past them. After a tsunami is generated by an earthquake, a sensor located at the ocean floor communicates with the DART buoy on the surface, sending info about the magnitude of the tsunami wave directly to the Tsunami Warning Centers. The centers then create an estimate of where the tsunami was generated to produce a more accurate tsunami forecast and provide communities with the appropriate alert level (either a Watch, Advisory or Warning).

NOAA’s buoys are amazing tools — but they aren’t the only tools we use to monitor the ocean! Learn more about the drifters, buoys, gliders and floats that are key to ocean science from NOAA’s Global Ocean Monitoring and Observing Program.