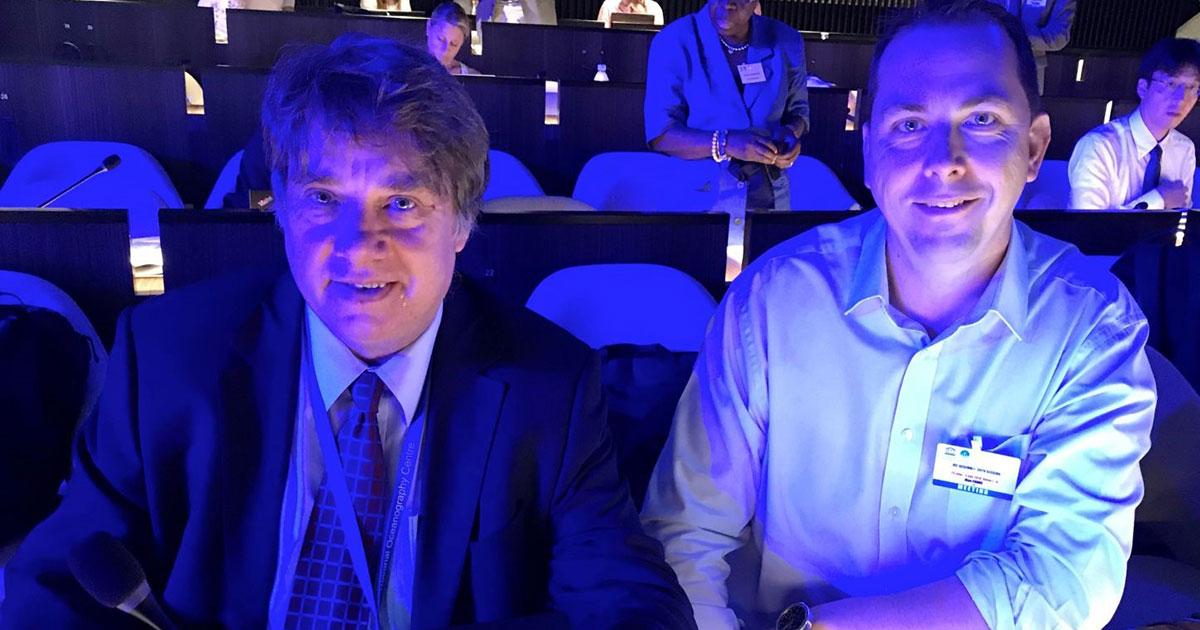 At the Intergovernmental Oceanographic Commission’s (IOC-UNESCO) 30th Assembly in Paris the UK, represented by the National Oceanography Centre (NOC), was elected onto the IOC Executive Council.

NOC’s Executive Director Prof Ed Hill (Head of UK Delegation), in attendance at the Assembly, said, “Membership of the Executive Council will enable the UK to guide the IOC agenda during this significant period of interest in the ocean, in particular the delivery of the preparation phase of the UN Decade of Ocean Science for Sustainable Development.”

Also attending were the Head of International and Strategic Partnerships Office Alan Evans (Alternate Head of UK Delegation), Dr. Penny Holliday and Dr. Graham Allen (in his capacity as acting Director of the Seabed203 project). As the UK Delegation they shared with the Assembly the G7’s statement from the 2018 G7 Summit which re-emphasized that the health of our seas and oceans is critical to the economic, social and environmental well-being of the planet and underscored the value of ocean science, observation and seabed mapping. The full statement can be found here.

The UK was also successful in securing Dr. Elaine McDonagh, Associate Head of Marine Physics and Ocean Climate at the NOC, as the IOC’s Group 1 representative on the Steering Committee of the Global Ocean Observing System (GOOS) program. The GOOS is a joint initiative between the IOC, WMO, UN Environment and the International Science Council which coordinates observations around the global ocean for three critical themes: climate, operational oceanography, and marine ecosystem health.

As the competent UN agency for marine science the IOC plays a key role in coordinating international efforts and to ensure that developing countries have the scientific capacity needed to achieve the UN Sustainable Development Goal 14 (SDG14) to conserve and sustainably use their ocean and marine resources.

The IOC’s regular mandate comprises a number of interconnected functional areas, including:

The Assembly provides an opportunity for the UK marine community to steer the direction of these critical areas. To this end the UK made a number of interventions, including on the Decade of Ocean Science for Sustainable Development, the UKs efforts via the Commonwealth Marine Economies Programme that can support the IOC’s regional office in the Caribbean, UKs support to re-invigorate the regional committee for the Indian Ocean, UKs contributions to Harmful Algal Bloom initiatives, our role as the Global Data Centre for the Nippon Foundation-GEBCO Seabed 2030 Project and promoting the UKs contributions to capacity development via Official Development Assistance funding, such as those provided via the Global Challenges Research Fund (GCRF). All intervention text can be found on the IOC-UNESCO web pages (once the final report has been published).

Bryan Nicholls Elected as President of A