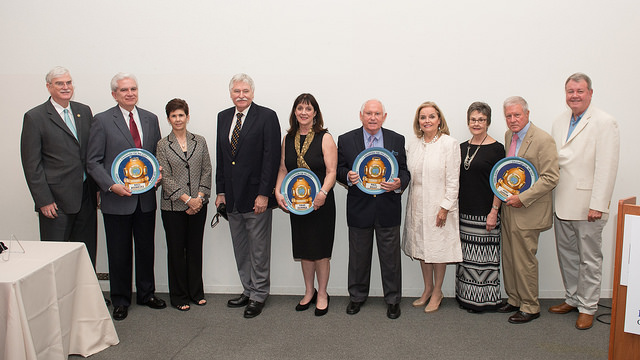 “This event allows us to bring attention to our world’s oceans and gives us a public way to honor our colleagues who have contributed to the betterment of the Gulf, an essential body of water,” said Dr. Flavius Killebrew, President and CEO of Texas A&M University-Corpus Christi. “The health of the Gulf of Mexico is complex and requires dedicated individuals with different areas of expertise and interests. These five honorees have demonstrated not just their expertise, but their integrity and their ability to listen, communicate and stay focused and committed to conservation.”

Each year, the HRI commemorates World Oceans Day by recognizing individuals and groups who have dedicated their careers to protecting and preserving the Gulf of Mexico’s natural resources. This year’s ceremony honored five people who have been quietly working behind the scenes for decades to accomplish important conservation milestones.

HRI Executive Director Dr. Larry McKinney said each were chosen for following the simple but transformative directive of the institute’s founder, newspaper magnate and conservationist Ed Harte, whose instructions were to “make a difference.”

“It’s important that we recognize these individuals who have done so much for our oceans, and the Gulf of Mexico in particular. We take so much for granted when it comes to our oceans,” McKinney said. “We do our share of abuse, but the Gulf still produces more than $1.4 billion of seafood for us annually, and will continue to do so as long as it remains healthy. These individuals we are honoring tonight are some of those who are helping to keep the Gulf healthy and productive for us longterm.” The 2015 Champions for the Gulf are: