‘The Darkness Beckons’ The History and Development of World Cave Diving 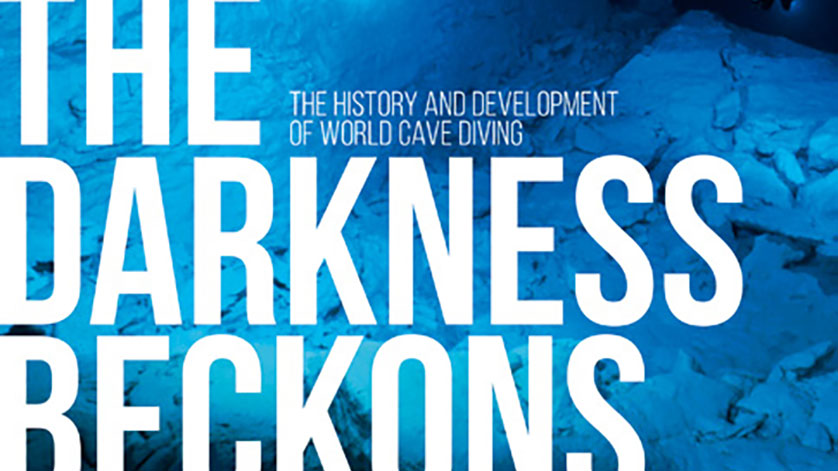 ‘The underground world presents the last arena for the true pioneering spirit.’ Martyn Farr’s The Darkness Beckons charts the history and development of cave diving, from early underwater expeditions in France in the late nineteenth century, through to cutting-edge dives across the globe, where iron-willed individuals are pushing the limits of equipment and techniques in the pursuit of exploration. 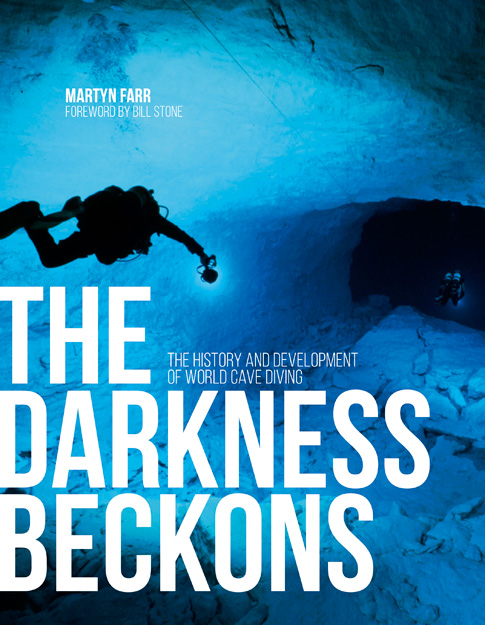 Cave diving is the natural evolution of caving, where cavers and open-water divers overcome the challenges of water-filled passages by using specialist breathing apparatus to explore further and deeper than ever before. The challenges are many – distance, depth, temperature, visibility, rockfall and simple restriction in passage size – together with the physical and mental demands placed on an individual in an environment where, despite meticulous preparation, equipment can malfunction and one cannot expect to be rescued if something goes wrong.

Early cave dives were made using Standard Equipment diving suits, before ‘frogman’ equipment was adopted by British and Italian divers in the 1940s. Around the same time, Jacques-Yves Cousteau and Émile Gagnan designed the compressed-air aqualung, the first scuba equipment. The development of breathing apparatus has continued, alongside solutions to evermore challenging projects, especially those at extreme depth.

British cave divers, including the author, have been at the forefront of many developments, such as the explorations at Wookey Hole in the Mendips, Keld Head in the Yorkshire Dales and Pozo Azul in Spain. Cave diving today is a truly international endeavour, and Farr gives detailed and engaging accounts of developments in Europe, the Americas, Australia and New Zealand, Southern Africa and more. Farr introduces cave diving’s pioneers and chronicles their achievements. Among a cast of many are the Britons Graham Balcombe and Mike Boon; the American Sheck Exley, who died while attempting to establish a new depth record in the Zacatón sinkhole in Mexico; and the outstanding German cave diver and equipment innovator Jochen Hasenmayer. The stories of their adventures are charged with courage, danger and excitement, and some have led to tragedy.

First published in 1980, this 2017 edition of The Darkness Beckons has been fully revised and updated to reflect the latest developments. Featuring over 400 breathtaking photographs and illustrations, and with a foreword by renowned American cave diver and explorer Bill Stone, it is an inspirational read for anyone with an interest in exploration and adventure.

Martyn Farr is an internationally renowned caver and cave diver and is responsible for the discovery of many miles of subterranean wilderness. He has been caving from the age of ten, discovering new caves from the age of sixteen, and his life has been dominated by elemental passion for exploration.

Martyn began cave diving in 1971 and by 1981 had established a world record for under-sea cave penetration in the Bahamas. In the UK he is known for his explorations in Wookey Hole, in 1977 and 1982, and the first subterranean traverse of Llangattock Mountain in Wales in 1986. He has made many expeditions worldwide, to Iran, Mexico, Borneo, China, Dominican Republic, Japan, France, Spain, the Canary Islands, the Balearics, Greece, Turkey, Brazil, Russia, Australia and, most recently, New Zealand.

Age has not diminished his enthusiasm or powers of endurance. In November 2012, he explored over one mile of new cave in South Island, New Zealand, and in 2013 and 2014 he made further solo discoveries of similar magnitudes in the same area. Original and exciting explorations are ongoing in Wales and Ireland.

Martyn has worked as a cave diving instructor for many years and remains as passionate as ever. His photographic work has appeared in many magazines and newspapers, including The Sunday Times, The Guardian and Daily Mail, and he has written eight books on this esoteric subject. He has helped produce any number of films and programs for television and radio and taken countless celebrities underground, including princes William and Harry. He lives in Crickhowell, South Wales.