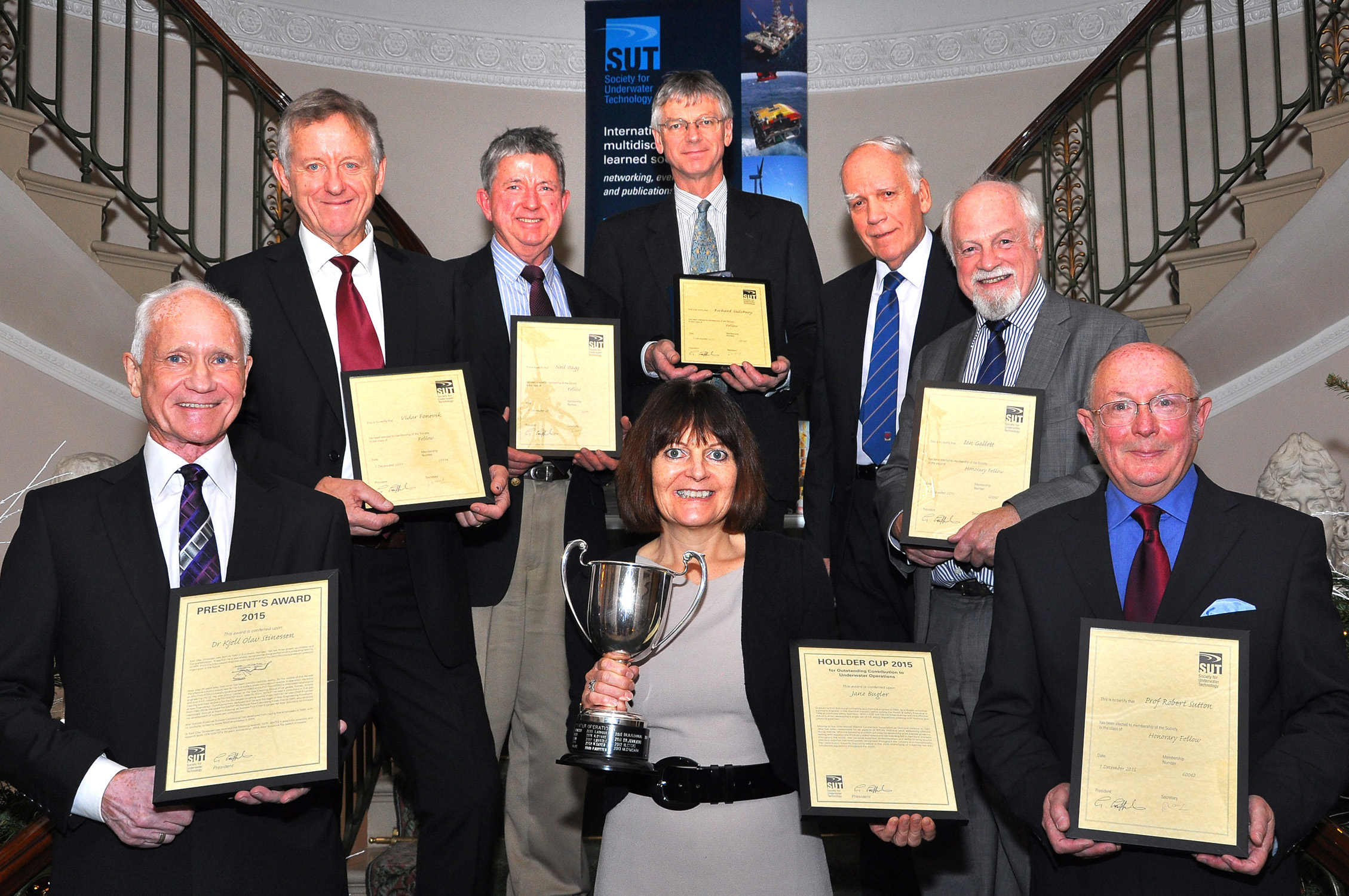 The Society for Underwater Technology (SUT) has presented its President’s Award to Dr Kjell Olav Stinessen in recognition of his long term services to industry at the Society’s AGM and annual dinner in London. Dr Stinessen has been an engineer for over 50 years and is now a First Chief Engineer at Aker Solutions. In 1985, he drew a sketch on the back of a napkin of his vision for how subsea compression might work in the future. In September this year, 30 years after the napkin drawing, that vision was transformed into reality with the offshore industry’s first full-scale subsea compression station in operation at the Statoil-operated Åsgard field. 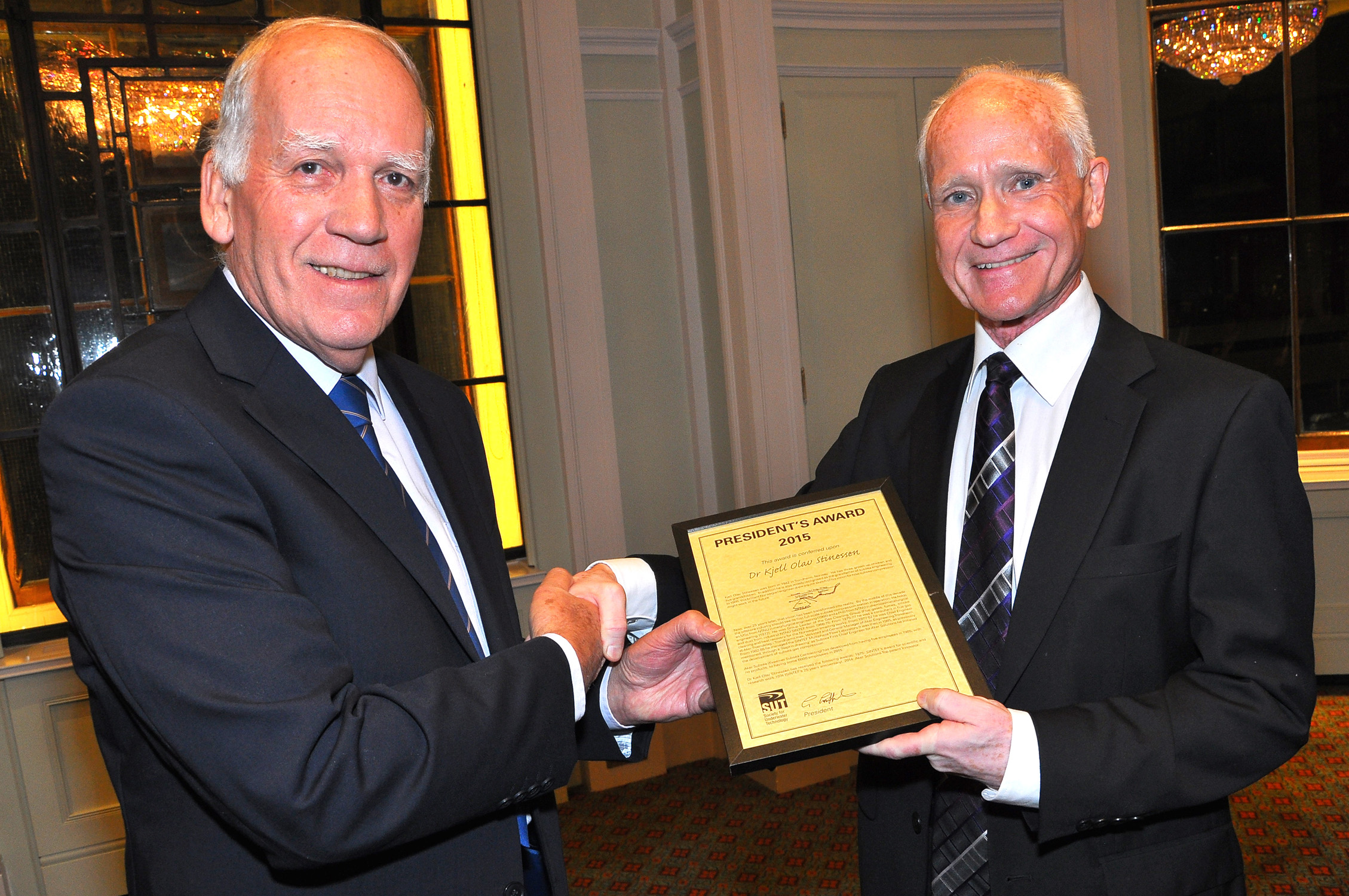 Dr Stinessen said: “Being awarded SUT’s President’s Award is a great honour. Countless engineering hours have been spent together by thousands of employees at Aker Solutions, sub-suppliers, Statoil and Shell to realise this vision and I am pleased that persistence can be awarded.

“Even at the age of 73, this inspires me to carry on for more years. I am now working on the development of a new concept which I believe has the same game-changing potential as subsea compression. With the experience we’ve gained, it will not take as long as 30 years this time and I am aiming at seeing it operational while I am still in work.”

Jane Bugler was also presented with The Houlder Cup for her outstanding contribution to underwater operations at the event on December 1. Recently retired, Ms Bugler spent the latter part of her career with the International Marine Contractors Association (IMCA) as technical director.

She was responsible for all aspects of IMCA's technical work addressing offshore diving, marine, offshore surveying and ROV activities by developing good practice guidance, liaising with regulatory and industry stakeholders and representing IMCA members' interests throughout the world. Her contribution towards improving safety in the most challenging of industries has influenced regulations throughout the world.

SUT awarded its Oceanography Award to Dr Karen Heywood, professor of environmental sciences at the University of East Anglia, for her outstanding contribution to the field of oceanography.

Dr Heywood’s research into the processes and dynamics of ocean circulation in the Polar Regions has led to new insights into how mixing and water-mass transformations at small and regional scales affect the global thermohaline circulation. She was also an early advocate for the use of autonomous underwater vehicles (AUVs) as carriers of sensors and samplers in experiments. Her recent work on this topic has seen undersea gliders being used in the Antarctic, including under icebergs.

The winners pose with their awards

Dr Bob Allwood, CEO of SUT said: “The Society is honoured to present these awards to such well-deserving winners. All the awardees have contributed greatly to their professions over the years and it is clear to see that they are still as passionate as ever about their fields of work.”

SUT’s Aberdeen Branch Award of Merit was presented to Ian Murray at a ceremony at the Marcliffe Hotel and Spa, Aberdeen. He was recognised as supporter of the underwater community by encouraging membership, delivering project insights and making time to mentor and encourage newly graduated engineers.

Matthew Head, who picked up his MEng Mechanical and Electrical Engineering degree from Robert Gordon University earlier this month, was also awarded the tenth Martin Richmond Award at the dinner for demonstrating academic rigour and a passion for their chosen subject. He was presented with a painting created by Gray’s School of Art student Dagmara Milosz.