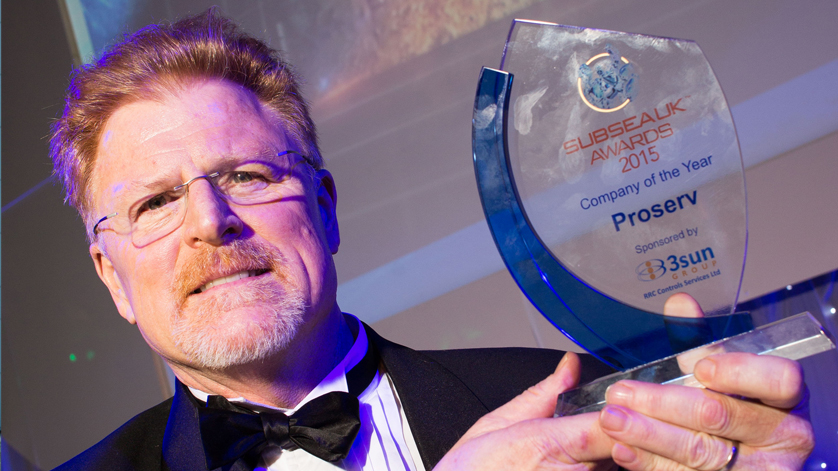 Global-leading energy services firm Proserv has won a much coveted industry award in recognition of its outstanding achievements after being named Company of the Year at the 2015 Subsea UK Awards last night (11 February).

Over the past year, Proserv has marked a number of key milestones including winning a series of high-profile contract awards globally, expanding its manufacturing facilities and capabilities and launching several new game-changing subsea technologies. Proserv also secured a major acquisition deal to help ensure its future sustainable growth and success.

Proserv engineer John Stoddard, who joined the company as a graduate just three years ago, also came under the spotlight at the Subsea UK Awards as a finalist in the Young Emerging Talent category.

David Lamont, Proserv’s chief executive officer, said: “It is a real privilege to win this award particularly during what has been a very challenging time for the industry. Against this backdrop, we have continued to evolve through a robust business strategy focused upon building on our market-leading position, track record and delivery of world-class products and services.“It is also with great pride to see someone from our dedicated engineering team hailed as talent of the future. John’s recognition is very well deserved and highlights the importance we place on developing our people and encouraging the next generation into the energy industry.

“At Proserv we work as a team and I see these awards as recognition of the hard work of everyone throughout the company in building our business to where we are today.”

The Subsea UK accolade is one in a series of awards that Proserv has won in recent months. Promising young employees, Marnie Toal, of Sauchen, Aberdeenshire, won the Oil & Gas UK Award for Apprentice of the Year while John Stoddard, of Peterculter, Aberdeen, also made the Graduate of the Year final shortlist at the awards.

In addition to the large scale contract wins during 2014 with operators including Hess Corporation, Noble Energy and Talos Energy, Proserv signed a definitive agreement to be acquired by major US private equity investor Riverstone Holdings LLC in December 2014. Proserv will continue to operate as an independent company under the terms of the deal as it embarks on its next phase of growth.

Proserv, which operates worldwide through 29 operating centres based in 11 countries, has a 40-year track record in delivering world-class solutions for the energy industry, particularly in the drilling, production and subsea market sectors.