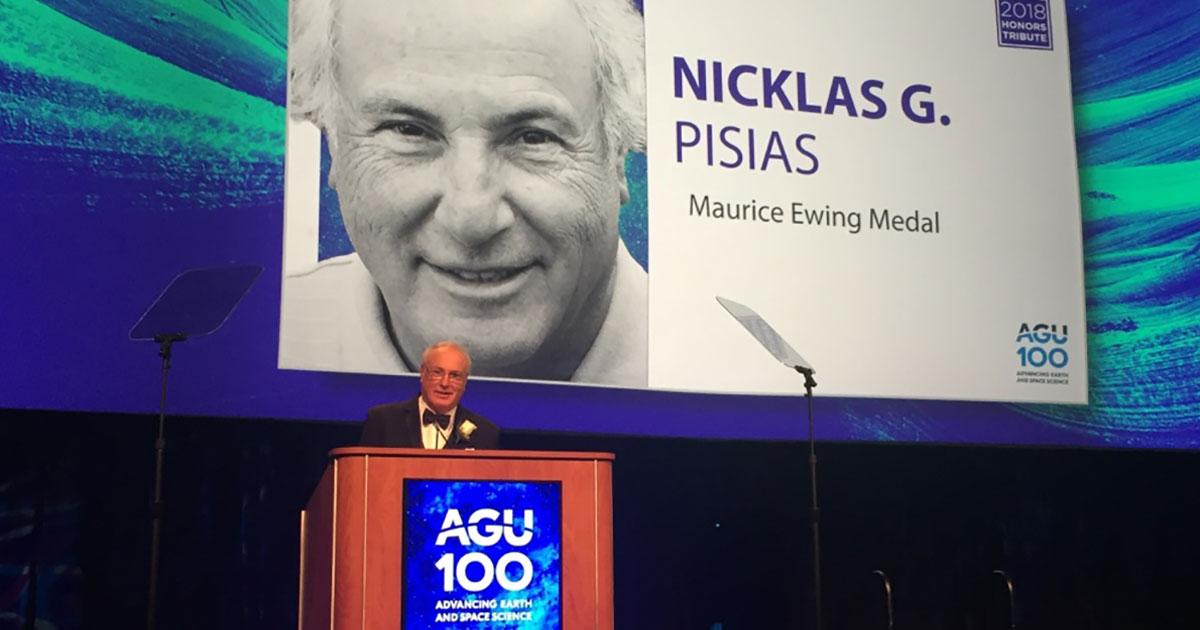 For his work in the establishment of a new scientific field, Dr. Nicklas Pisias received the Maurice Ewing Medal, sponsored jointly by the U.S. Navy and the American Geophysical Union (AGU).

Pisias, a professor emeritus at Oregon State University, accepted the award at the AGU Fall Meeting in December 2018. Named after Dr. Maurice Ewing, a trailblazing geophysicist and oceanographer, the medal is given yearly to one honoree in recognition of “significant original contributions to the ocean sciences.”

In the late 1970s, and for the next two decades, Pisias helped establish the field of paleoceanography—the study of the ocean’s history through sediment analysis, geochemistry, isotopic dating and time-series analysis of ocean processes and dynamics.

The Office of Naval Research (ONR) sponsored some of Pisias’ early research, including analysis of sediment cores during the Deep-Sea Drilling Project and Ocean Drilling Program, which lasted from 1968 to 2004. Both international drilling initiatives studied the history of the ocean and the nature of the crust beneath the seafloor. Pisias’ research established some of the first continuous, high-resolution records of climate shifts over the past five million years.

“Dr. Pisias combined a deep, broad understanding of both paleoceanography and climate dynamics with nonlinear, statistical-analysis techniques that he pioneered,” said Dr. Tom Drake, head of ONR’s Ocean Battlespace Sensing Department and presenter of the award.

"He demonstrated that time-series analysis could date layers of seafloor sediment in absolute terms and reveal changes in the Earth’s climate,” Drake continued. “Dr. Pisias’ groundbreaking work underlies, and has had a strong influence on, current climate research.”

Knowledge of seafloor properties is of great interest to the Navy. ONR-sponsored studies of marine geology and geophysical phenomena have had a number of surprising and unexpected outcomes in diverse fields, illustrating the value of basic research.

Since the Maurice Ewing Medal’s creation in 1974, multiple ONR-sponsored researchers have won the prize. These include Dr. Walter Munk, who invented the concept of surf forecasting; geophysicist John I. Ewing; and marine seismologist Dr. John Orcutt.

AGU is a not-for-profit, scientific organization with nearly 60,000 members in 139 countries.