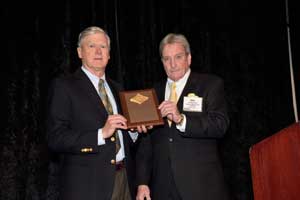 “We are honored to receive this distinguished award from such a well-respected organization as NOIA. We are committed to the highest safety standards and, through rigorous risk analysis with our customer, we developed multiple redundant, fail-safe systems to safely conduct complex subsea operations in deep water,” McEvoy said.

Oceaneering was recognized for the innovative and incident-free completion of a subsea well stimulation campaign, using a multipurpose service vessel instead of a work-over rig.

Oceaneering’s award-winning entry was selected by an independent panel of judges from the U.S. Coast Guard, the Bureau of Safety and Environmental Enforcement, the National Academy of Sciences Transportation Review Board, and an industry safety consultant.

Moreover, the NOIA Board of Directors recently elected McEvoy as Chairman for the upcoming 2016-2017 term.

“I am grateful for the opportunity to serve as Chairman of NOIA. With low commodity prices and a tough regulatory environment, this is a critical time for the offshore energy industry,” said McEvoy. “While we face significant challenges, I am confident we can overcome them. I look forward to working alongside NOIA members to promote the safe development of offshore energy, and for consistent, transparent, and productive federal policies that allow for the continued growth and development of all energy sources in all areas of the Outer Continental Shelf (OCS).”

Since 2011, McEvoy has served as Oceaneering’s CEO. He also serves on the company’s board of directors, and was the NOIA Vice Chairman for the 2015-2016 term.

Since 1978, NOIA has held the SIS awards competition to recognize those who have contributed to improving the safety of life in the offshore energy industry. The Culture of Safety Award was added to the competition in 2014 to honor overall organizational immersion in and commitment to safety, which has resulted in remarkable, measurable, and sustained safety performance over a prolonged period of time.