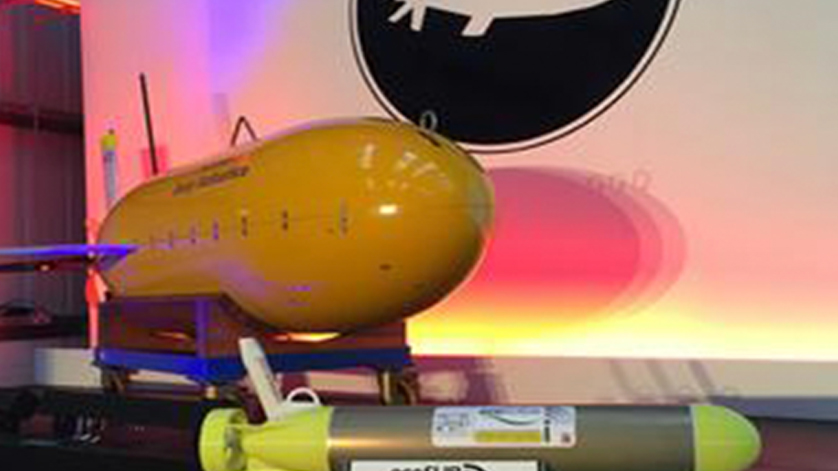 The first robotic microsub capable of being deployed from a robotic surface vehicle was unveiled at the Marine Autonomous and Technology Annual Showcase this November, at the National Oceanography Centre (NOC).

This innovative new design, led by Planet Ocean & co-developed by NOC, ASV ltd & The University of Southampton, is around three times smaller than current autonomous underwater vehicles (AUVs). At around 50cm long, their tiny size allows them to be used in ways previously not considered. Microsubs are also able to frequently monitor infrastructure, such as pipelines for corrosion or potential leaks in an extremely cost effective manner.

The new ecoSUBμ and larger ecoSUBm are economically and environmentally more cost efficient than their larger counterparts. Furthermore, a ‘shoal’ of microsubs can work together to collectively create a far superior 3D map of the underwater environment than a lone AUV. They can survey a large area very quickly, covering hundreds of kilometers. Paired with complementary technologies, such as autonomous surface vehicles and satellites, a more complete picture of the oceanic environment can be constructed than ever before.

This new sub was developed at the new Marine Robotics Innovation Centre with the NOC, who have twenty years’ experience of AUV development, and Planet Ocean. Kevin Forshaw, NOC’s Associate Director, Innovation and Enterprise said “this is an example of a highly innovate new product, that is being rapidly brought to market due to the comprehensive support being offered from the technical team within the Marine Robotics Innovation Centre. Product development such as this, that draws on leading thinking from NOC and the University of Southampton, will help UK PLC to make further inroads into this rapidly expanding global market."

The ecoSUB’s were unveiled during the Marine Robotics and Technology showcase, a week of events celebrating the one year anniversary of the marine robotics Innovation Centre. This soft launch comes after just one year into a two year project, with the next phase being all about testing before the product officially comes to market at Ocean Business in April 2017.

A spin out company from Planet Ocean, ecoSUB Robotics Ltd. has been formed to concentrate on the development and manufacture of these innovative vehicles.

Planet Ocean Managing Director Terry Sloane commented “Having our engineers co-located within the NOC, in the new Innovation Centre, has been key to the success of this project and to the speed at which the project has progressed”.