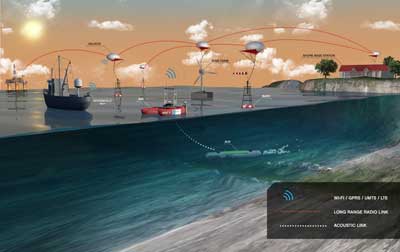 Cutting-edge project will provide broadband, low-cost Internet access in remote ocean areas, more than 100 km off the coast, using standard access technologies, such as Wi-Fi and 4G, to support the Blue Economy, including fisheries and maritime transportation.

The goal of the BLUECOM+ project, which is being developed by a group of Portuguese and Norwegian researchers, is to facilitate activities such as the exploitation of mineral resources on the ocean bed, environmental monitoring, or other traditional activities like fisheries and maritime transportation, which increasingly require access to communications at sea.

The concept of the project, which involves the Institute for Systems and Computer Engineering, Technology and Science (INESC TEC), the Portuguese Sea and Atmosphere Institute (IPMA), and MARLO AS (Norwegian partner), is based on the use of helium balloons anchored, for instance, on buoys, vessels or wind farms, forming a flying mesh broadband network operating in TV white spaces, in order to guarantee long-range radio connections.

According to Rui Campos, researcher at INESC TEC and coordinator of the project, the BLUECOM+ innovation lies on three components: exploiting TV white spaces in maritime environment; using a combination of helium balloons and kites that work as wireless access points that repeat signals at high altitudes, which is useful for radio signal propagation, and consequently to increase the range of communications; providing broadband Internet access in remote ocean areas using standard access technologies.

“The combination of these three components will make it possible for a user on a ship 100 km off the coast to access broadband Internet using a smartphone, without any hardware or software upgrade. This is a unique project and could be an alternative to satellite communications, which are the only solution available today”, as explained by the project coordinator.

The main goal of the project, which will be concluded in December 2016, is to build a prototype of the wireless communications solution and to demonstrate it in maritime environment, in the summer of 2016, using two research vessels provided by IPMA, which will work as anchor points for the helium balloons.

“Taking into consideration the lack of broadband communications in a maritime environment and the growing activity at sea, in our opinion, the project’s economic potential is very high”, Rui Campos stresses.

According to the researcher, the solution developed may have an impact on the sectors of the Blue Economy, including maritime transportation, fisheries, offshore aquaculture, tourism, recreational sailing and the exploitation of mineral resources on the ocean bed. This will be a step forward to making the digital economy available in maritime environment and close the gap between the terrestrial and maritime communications scenarios that exist today.

“Because this is an innovative project, the technology developed may be exported, and the business models to be studied as part of the project may be applied worldwide”, the coordinator of the project concludes.

BLUECOM+ is aligned with the TEC4SEA initiative, which started in 2012 at INESC TEC with the development of systems such as JANUS, whose goal is to turn fishing ships into Internet relay points that send signals to other ships outside the range of the network on shore, or MARBED, a pilot of a maritime wireless network installed in the Porto metropolitan area.

The BLUECOM+ project is funded by the EEA Grants and by Norway Grants.