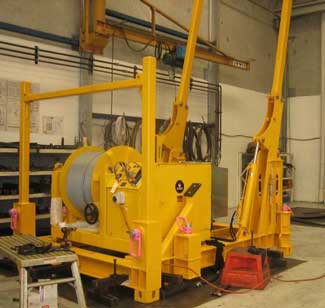 In 2015 L-3 Oceania commissioned International Maritime Consultants to design an air deployable launch and recovery system (LARS) for an L-3 Deployable Side Scan Sonar (DSSS). The system was configured to be rapidly deployable by land, sea or air and fitted to a vessel of opportunity with minimal integration.

Designed in compliance with Lloyd's Register - Code for Lifting Appliances in a Marine Environment and DEF(AUST) 9009A, the IMC folding A-frame LARS with its 10’ ISO container footprint was manufactured in Western Australia by Fremantle Hydraulics complete with all hydraulic and electrical controls to support the L-3 Klein winch system and tow fish. With 2000 meters of armored cable, the Klein 3000 side-scan sonar tow fish operates at 100 and 445 kHz and produces detailed seabed images for accurate object detection.

The deployable side scan sonar system will to be utilized as a part of Australia’s recently enhanced submarine rescue capability. In the event of a distressed submarine (DISSUB) incident the system will provide detailed images of the topography of the sea floor and hazards within the rescue area. The system could also be used for locating other assets on the seabed and a variety of subsea survey work.

Due for commissioning in H1 2016, once operational, the system will be integrated onto the Royal Australian Navy’s submarine escape gear ship Besant. One of two new ships acquired to enhance the Royal Australian Navy’s submarine search and rescue capability, and based at HMAS Stirling in Western Australia, the 83 meter steel monohull will be used to provide an early intervention role in the event of a disabled submarine.

Built by Damen in Vietnam, Besant is operated by DMS Maritime, part of the international service company and Australian government contractor, Serco. IMC qualified to be part of the Serco Defence Technical Support Network in 2015