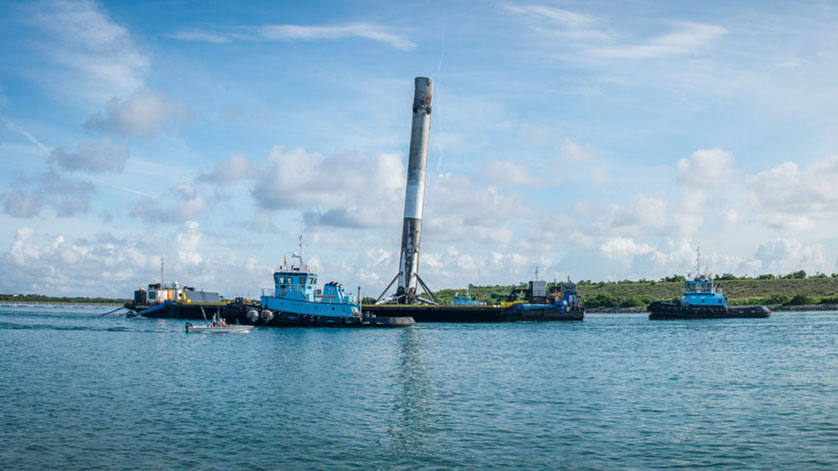 On Thursday, June 29, 2017, Port Canaveral welcomed back a SpaceX Falcon 9 rocket booster after its successful June 23 launch and landing aboard the drone ship Of Course I Still Love You. This was the most challenging launch for the 229-foot-tall rocket to date. The first stage rocket soared to an altitude of 44 miles before successfully separating from an 8,150-pound BulgariaSat 1 satellite.

Once the Falcon 9 first stage rocket booster has been offloaded from the drone ship, it will make the short transit to SpaceX’s new rocket refurbishment facility some 700 yards away. SpaceX is planning to launch its third Falcon 9 rocket in less than 10 days, scheduled for Sunday evening, July 2nd.

Led by the elected five-member Canaveral Port Authority Board of Commissioners and Port Director and CEO, Captain John Murray, Port Canaveral is one of the world's most dynamic and exciting ports. A world-class gateway for cruises, cargo, recreation and logistics, as well as a gateway to new frontiers, including space, Port Canaveral hosts more than 4 million revenue cruise passengers through its state-of-the-art terminals and 5.5 million of tons of cargo annually, including bulk, break-bulk, project, and containerized. The Port is strategically located to service all Florida markets, as well as the Southeastern United States. In addition to world class cruise facilities and diverse cargo operations, Port Canaveral offers more recreational opportunities than all other Florida deep-water seaports combined, including public parks, free public boat ramps, marinas, an entertainment district, and the seven-story interactive exhibit and event venue Exploration Tower. For more information or to download high resolution versions of the photos, click here.