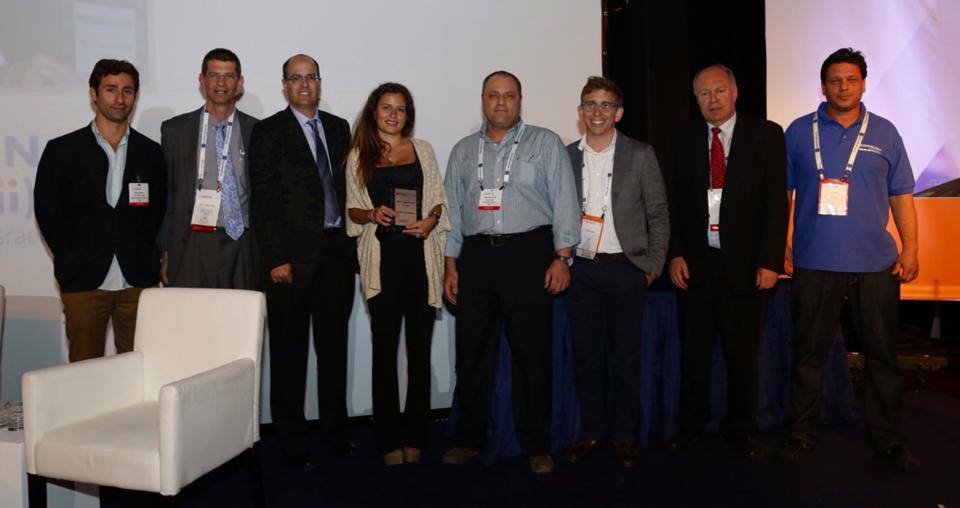 Between the 20th and the 22nd of May in Tel Aviv, the Chief Scientist of the Ministry of Economy held a competition in the search for the most innovative start up. Eco Wave Power won the competition along with 2 other companies.

Sixty young start-ups were competing for the innovation award with the custody of the chief Scientist of the Ministry of Economy, as part of the start-up WOW competition that took place in the Mixiii 2014, which is the yearly central event for the hi-tech industry.

The sixty companies, which went through a professional screening process by the office of the chief scientist, showcased their technologies in a special start up pavilion that was located in the center of the exhibition and occupied 10% of the entire exhibition space.

Personal interviews were held with representatives of each of the 60 companies competing for this title, and the judges decided on 20 companies which will present their innovation on stage for 7 minutes as part of the official conference's agenda.

In the last day of the conference, 3 companies were chosen as the winners according to various criteria such as need, level of innovation/uniqueness, business model and go to market strategy. The winners for the most innovative technologies were Eco Wave Power, SQream and VocalZoom.

This award, for the unique EWP's wave energy generation technology, is in continuity to a number of awards that Eco Wave Power received in the past. In 2012, Eco Wave Power won the Frost and Sullivan Product Innovation Award, and earlier this year the company was announced as the winner of the International Energy Globe Awards, in the category of "The Best Project in Israel" to be given to EWP during the UN's environmental day, in the 4th of June, 2014.

Avi Hasson, The Chief Scientist (In the photo with Inna Braverman, co-founder of EWP and the additional winners) was present in the award ceremony and congratulated the winners. He added that "the Office of the Chief Scientist invests significantly in startup companies. We believe that a massive investment in early stage entrepreneurship is the key to future success. The Mixiii 2014 event is a unique platform for the innovative Israeli technologies".

David Stark, a principle at "OURCROWD" investment platform and one of the judges in the competition also praised Eco Wave Power for its significant progress and mentioned that: " "The judges were really taken with the world-changing potential of Eco Wave Power. The company has introduced a number of innovations to the technical design of its solution, aiming to avoid the known pain points of other wave energy products on the market. This appears to be the reason the company has garnered such market interest in a relatively short period of time. If the company can execute on its vision of delivering economically competitive energy to the grid it will be a true game-changer."

Eco Wave Power was established in 2011 and became a significant player in the wave energy industry. In a relatively short period of time, the company was able to construct a demo plant in Jaffa Port and to secure a 79MW of projects pipe-line.

For the execution of its pipe-line, the company initiated its first fund-raising round for a sum of 10 Million USD.

Tamar Ben Dor, Investment Manager, in BDO's M&A department accompanies EWP in the fund-raising process. In an interview to Globes (weekend edition) she mentioned that: "usually we are less involved in fund-raising for start-up companies, however this company is innovative and their technology looks like a breakthrough, upon proving its feasibility. We are looking for a strategic partner. We believe in the company and think that they have a chance to be the one that will make a change in the wave energy field. For now, we have conducted some meetings with investment groups".