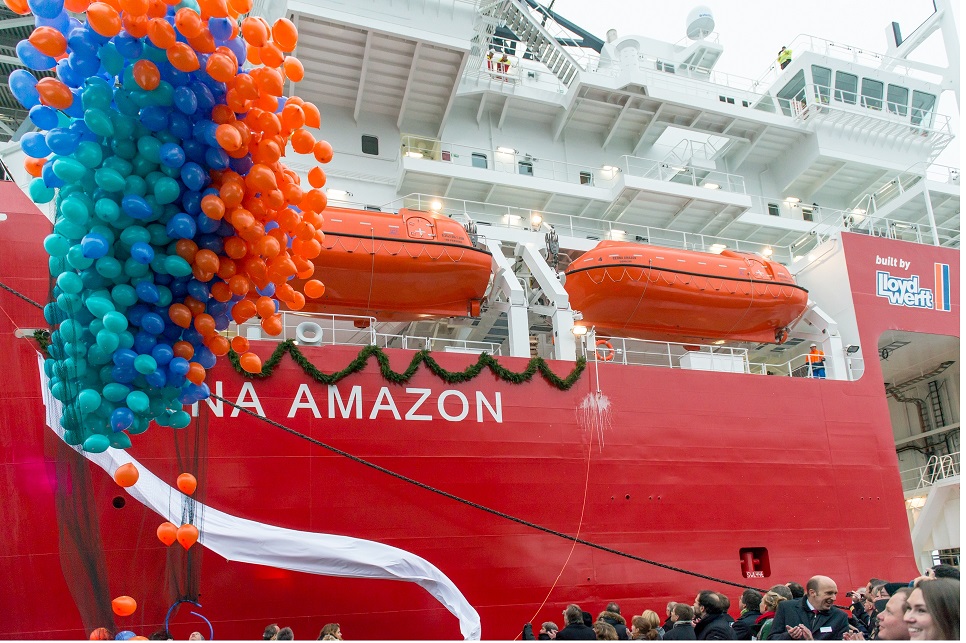 Ceona, SURF contractor with heavy subsea construction capabilities, has bolstered its pioneering fleet of next generation vessels with the christening of its flagship asset, the Ceona Amazon, which has been delivered in less than two years of the letter of intent (LOI) for its construction being signed.

The game-changing Ceona Amazon has been internally designed at Ceona and purpose built to perform in multiple pipelay and operational modes. She also features a large storage capacity and heavy subsea construction capability with her versatility setting her apart as a deepwater field development asset.

Lloyd Werft delivered the Ceona Amazon within time and budget, and the vessel has also successfully undergone sea trials ahead of schedule.

Steve Preston, chief executive officer at Ceona, which has expanded its geographic footprint in West Africa, praised the teams involved in executing the Ceona Amazon development to the highest level: “Lloyd Werft has completed the vessel build and outfitting in just under two years of the LOI and to an extremely high quality. This is a stunning achievement by industry standards and a testament to their expertise and ability.”

“I would also like to pay tribute to all our engineers and managers at Ceona who developed the concept for the Ceona Amazon design in-house, and have shown complete dedication to ensuring the building of a ground-breaking field development vessel in record time. This achievement underlines Ceona’s vision for bringing new, cost-effective subsea services to oil & gas operators from small to medium-sized independents, national and international oil companies.”

Rüdiger Pallentin, chairman of the Board of Lloyd Werft, added: “The Ceona Amazon is a masterpiece of shipbuilding, built by experts for experts with team-playing site teams from both Ceona and Lloyd Werft. We are proud and happy to deliver the flagship of Ceona's fleet."

Following her christening, the Ceona Amazon will transfer to Huisman yard in Schiedam, The Netherlands, where she will ultimately be equipped with a 570 tonne multi-lay pipe tower and two heavy duty 400 tonne offshore cranes – all of which have already been built by Huisman, a global leader in lifting, drilling and subsea solutions, and are ready to be installed.

The innovative G-lay pipelay system, developed and patented by Ceona, features an inclinable lay spread with a top tension of 570 tonnes and a rigid firing line system. It combines the offshore assembly of rigid pipe joints along a traditional firing line, then plastic bending of the pipe through a route similar to that of a reel-lay vessel, completed by a vertical exit through the moonpool (J-lay).

With capacity to carry 8,500 tonnes of pipe, the Ceona Amazon will be able to lay rigid and flexible pipelines and umbilicals, and install heavy subsea structures or floaters (TLP, semi or FPSO) using its two 400 tonne subsea cranes working in tandem.

Stuart Cameron, chief operating officer at Ceona, said: “The Amazon’s completion is a significant milestone for Ceona and for its clients. As our first-owned purpose-built vessel, it is a powerful asset that can execute complex logistical projects in remote, harsh and deepwater environments in one trip.

“The vessel is ideally suited to the deeper waters of West Africa, the Gulf of Mexico and Brazil. The Amazon also brings our clients a new, cost-effective solution for their heavy subsea structure and floater installation services, via EPIC or Transportation and Installation (T&I) contracts.”

He added: “After installation of the pipe-laying system and the twin 400 tonne cranes, the Amazon will be the second new vessel – after the Polar Onyx – Ceona will bring to the market on time and in less than a year. The Polar Onyx and the Normand Pacific have got significant experience in the Brazilian deepwaters for Petrobras, and for Independent, IOCs and NOCs in the Gulf of Mexico and in West Africa.”

The vessel’s outfitting at Bremerhaven followed successful floatation at Crist yard in Poland earlier this year in April before all major machinery, equipment and the helideck were installed in Germany.