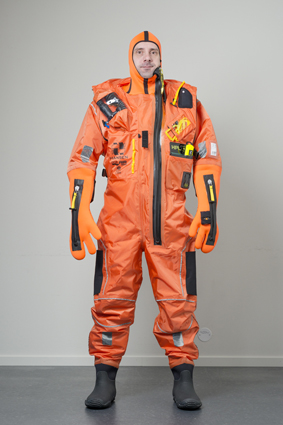 A new EPIRB (Emergency Position-Indicating Radio Beacon) makes it easier to locate people in distress at sea. The beacon is developed and manufactured in Norway.

The company has developed the new emergency beacon that will initially be fitted into survival suits worn by workers on offshore oil installations. Over time, anyone who works in vulnerable conditions at sea, such as fishermen or people working on offshore wind turbines, can have the emergency locator fitted in their work wear.

– Previous tracking transmitters used by offshore oil workers have only transmitted signals on the 121.5 MHz (VHF) emergency wave band that only rescue helicopters and rescue boats could pick up. But now we have developed a radio beacon that combines signals on several different frequencies.

The beacon is mounted in a bracket in the survival suit. The technology used is not new, but the combination is the first of its kind.

In addition to sending signals over the emergency frequency, it also utilizes AIS, which is an anti-collision system for shipping. The beacon also uses the American GPS satnav system and its Russian equivalent, Glonass.

– Its particularly important in the far north to use the Russian system. This satnav network is located further north and helps make locating a person in distress safer and more accurate, says Asle.

The oil company Eni Norway has already started using the equipment for their workers in the Barents Sea.

– The safety of employees always come first, and as the operator of the first Norwegian oil field to come on stream in the Barents Sea, is important for us to develop customized solutions, says HSE Director Liv Nielsen from Eni Norway.

Hansen Protection has spent double digit millions (NOK) developing the new beacon and advanced new survival suits for the North. The company has worked closely with the oil industry to meet their specific safety requirements.

– Governments, unions and oil companies set very high standards for safety equipment to be used at sea. They have helped to test the equipment. The tests were done in a cold chamber and pools that simulate real-world conditions, such as in the Barents Sea. The equipment is tested as thoroughly as aircraft components, said Knut Åsle.