A Future-Proof Vessel for a Booming Market 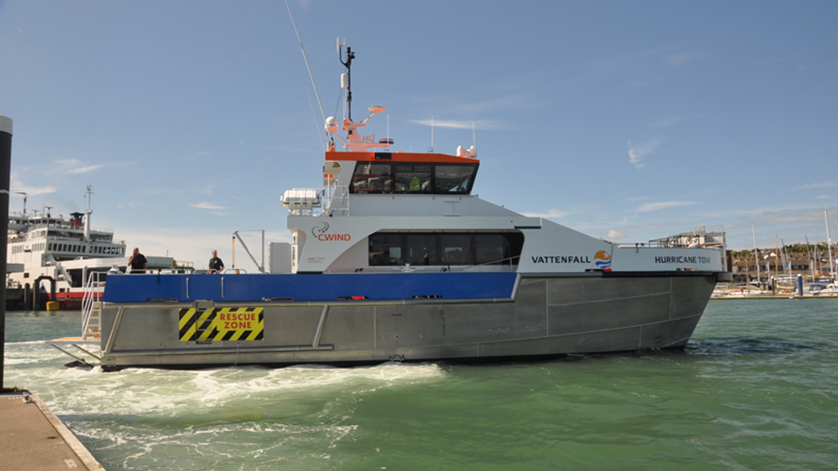 The International Energy Agency states that 2.5% of global electricity demand is today provided by wind power—and that figure is set to grow by 42% through to 2021.

In Europe alone, according to the 2016 report from the European Wind Energy Association (EWEA), 754 new offshore turbines in 15 wind farms were grid-connected from 1 January to 31 December 2015, representing a connected capacity increase of 108% over 2014.

Many of those people will need to travel the average 43.3km from ports and harbous to offshore wind farms to install and maintain the turbines. And Isle of Wight-based Aluminium Marine Consultants has developed a Category 1, Bureau Veritas-classed catamaran crew transfer vessel (CTV) that’s unrivalled for this task as well as being highly flexible.

Aluminium Marine Consultants (AMC) developed the vessel in conjunction with a major offshore wind farm contractor that was so impressed it bought four of the CTVs, the fourth of which was recently delivered.

AMC commercial director Rob Stewart explains why the CTVs are considered future proof: “They exceed all the usual specifications. The design has been considered and engineered for both current and future needs; it’s not just fully compliant with current UK Maritime and Coastguard Agency regulations, but meets MCA’s raised standards and new guidance. It was a conscious decision to take on ‘not just the word, but the spirit’ of that guidance, ensuring our vessels will be signed off without any grey areas.”

Named Tempest, Tornado, Typhoon TOW and Hurricane TOW, the first two are 23m long, the latter pair 25m. But all have been engineered to be essentially similar, allowing completely interchangeable crewing that is proving of huge benefit to the client.

AMC’s advanced CTV concept is not focused on transit speed alone, though the vessels can achieve 28 knots, but also for sea-keeping qualities and the ability to remain at sea for extended periods.

The semi-displacement catamaran hull and 1.4m draught, coupled with a high waterline, give plenty of room for waves to pass between the hulls, thus preventing slamming—which often happens when the wet deck is too low. That also translates into more-than-adequate space in the engine compartments, giving easier maintenance access, and importantly, comfort for the 12 passengers and three crew the CTVs can carry.

To achieve maximum working hours on the 25m vessels, propulsion is via a pair of MTU 12V 2000 M72 twelve-cylinder engines each rated at 1,080kW and with a guaranteed 100% of the duty cycle, with 10V engines on the 23m vessels. They drive Rolls-Royce Kamewa A3 56 water jets fitted with a compact, efficient reversing bucket able to deliver as much as 70% of the normal forward thrust, together with a 10% higher bollard push. The latter not only helps transit efficiency, but keeps the vessel pushed onto turbine towers in high seas.

That high spec also includes MTU’s Blue Vision high-speed internet connection, allowing the propulsion system to be monitored both aboard a vessel and ashore. Engine data can be evaluated to allow either operation or fuel consumption to be tweaked to give the most efficient performance for prevailing conditions.

While primarily intended as wind farm support vessels, they are also versatile and have the capability for dive, survey, and ROV operations, either overboard or through a moonpool. They also have formidable cargo-carrying capacity. The forward and aft deck areas each have space for 10 tonnes of cargo. And a crane can be mounted if needed.

“Wind farm service vessels today, and increasingly in the future, are not just transit vessels,” Rob Stewart concluded. “They not only have to cope with extended operating hours, but have to meet ever more stringent international regulations.

“Our CTVs do that—and will give peace of mind to customers.”