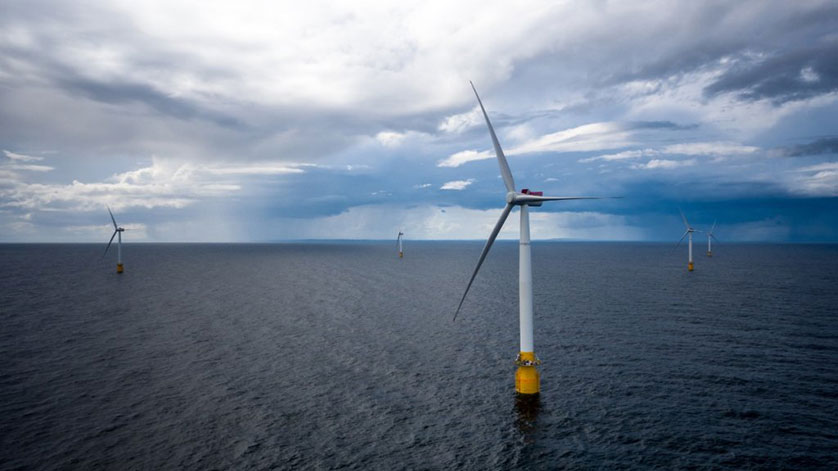 Hywind Scotland, the first floating wind farm in the world, has started to deliver electricity to the Scottish grid. the First Minister of Scotland, Nicola Sturgeon, officially opened the wind farm on Wednesday, October 18.

The 30MW wind farm, operated by Statoil in partnership with Masdar, is located 25 kilometers offshore Peterhead in Aberdeenshire, Scotland and will power approximately 20,000 households.

“Hywind can be used for water depths up to 800 meters, thus opening up areas that so far have been inaccessible for offshore wind. The learnings from Hywind Scotland will pave the way for new global market opportunities for floating offshore wind energy. Through their government's support to develop the Hywind Scotland project, the UK and Scotland are now at the forefront of the development of this exciting new technology. Statoil looks forward to exploring the next steps for floating offshore wind,” says Irene Rummelhoff, executive vice president of the New Energy Solutions business area in Statoil.

“I am delighted to open Hywind Scotland—the world’s first floating wind farm. Hywind will provide clean energy to over twenty thousand homes and will help us meet our ambitious climate change targets.”

“This marks an exciting development for renewable energy in Scotland. Our support for floating offshore wind is testament to this government’s commitment to the development of this technology and, coupled with Statoil’s Battery Storage Project, Batwind, puts us at the forefront of this global race and positions Scotland as a world centre for energy innovation,” says the First Minister.

Battery storage has the potential to mitigate intermittency and optimize output.

“It’s fantastic to see Hywind Scotland up and running. The project is a great success for the teams at Statoil and Masdar and for Scotland, where floating wind could really flourish due to our accessible deeper waters. We are committed to continuing our work to encourage floating offshore wind projects, which will in turn drive down costs, benefitting the whole sector—as well as the climate and consumers.”

In recent years, there have been significant cost reductions in both the onshore and bottom fixed offshore wind sectors. Floating wind is expected to follow a similar downward trajectory over the next decade, making it cost competitive with other renewable energy sources.

“Statoil has an ambition to reduce the costs of energy from the Hywind floating wind farm to € 40-60 €/MWh by 2030. Knowing that up to 80% of the offshore wind resources are in deep waters (+60 meters) where traditional bottom fixed installations are not suitable, floating offshore wind is expected to play a significant role in the growth of offshore wind going forward,” says Rummelhoff.

Mohamed Al Ramahi, CEO of Masdar, is pointing to that future opportunities are already being assessed.

“Masdar has a long-standing commitment to renewable energy in the United Kingdom, and we are immensely proud to deliver our first project in Scotland alongside our partners,” says Al Ramahi.

“Hywind Scotland is showing that floating wind technology can be commercially viable wherever sea depths are too great for conventional fixed offshore wind power. This opens up a number of new geographies, and we are already looking at future opportunities with our partners, building on our existing international portfolio in onshore and offshore wind energy, and solar power,” he says.

Hywind Scotland is adding to Statoil’s strong UK presence, and over the last few years Statoil’s footprint has grown in the UK. In Aberdeen over 1500 are employees in the final phase of commissioning the Mariner oil field, one of the largest upstream UKCS developments in the last ten years, due to come onstream in 2018.

Statoil already has a sizeable renewables portfolio with an offshore wind portfolio with the capacity of providing over 1 million homes with renewable energy. Statoil operates the Sheringham Shoal wind farm in the UK, which has been in production since 2012.

The Dudgeon offshore wind farm in the UK, also operated by Statoil has now been completed and is also in production. In 2016 Statoil also acquired 50% of the Arkona offshore wind farm in Germany, which will deliver power in 2019. Statoil recently announced the acquisition of a 40% share in the construction ready 162MW Apodi solar asset in Brazil.