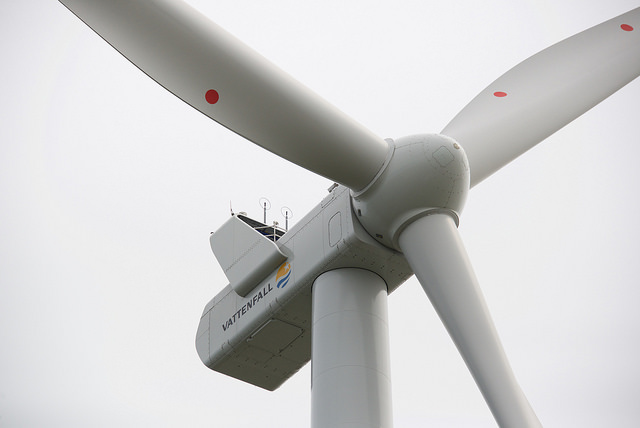 Vattenfall has decided to invest more than SEK 3 billion in a combined wind farm and technology development center off the Scottish coast.

The wind farm, known as the European Offshore Wind Deployment Centre (EOWDC), will comprise eleven turbines and have a capacity of 92.4 MW. Apart from generating electricity, it will also be a center for testing and developing new technologies for offshore wind power.

Magnus Hall, CEO and President of Vattenfall, said: “We aim to double our wind power capacity from 2 to 4 GW by 2020 and are focusing on reducing and streamlining our offshore wind power costs. Our investment in the European Offshore Wind Deployment Centre off Aberdeen is an important part of this process.”

The Scottish government granted approval for building the wind farm in 2013. After legal challenges were cleared in December 2015, the project team has been preparing for the wind farm’s installation.

Construction of the wind farm offshore is expected to start in the latter part of next year so that it can start generating electricity in spring 2018. Onshore construction activity will start later this year.

The development of the EOWDC was taken forward with a local partner, the Aberdeen Renewable Energy Group, since 2089. In line with earlier agreements, Vattenfall will acquire the Group’s shares and become the sole owner of the project.

The decision to invest in the EOWDC comes only a few weeks after the British referendum on leaving the EU and demonstrates Vattenfall’s continuing long-term commitment to wind power in Great Britain.

Magnus Hall continued: “This project underscores our long-term aim to extend our wind power capacity in Great Britain. The British government wants wind power to continue making up a significant part of the country’s climate-neutral electricity generation. We aim to be a part of this development and grow in Great Britain.”