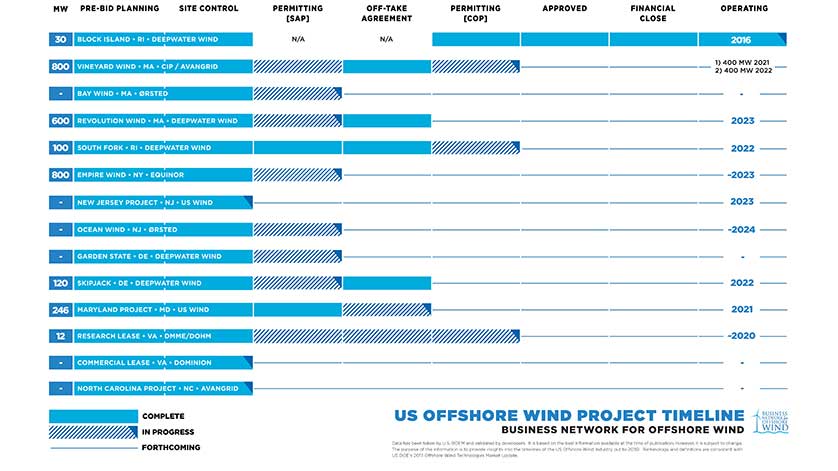 The summer of 2018 will be remembered as the time US states took huge steps forward in the offshore wind programs for their states and the US offshore wind industry as a whole. I think it is worth recapping what has happened over the summer as we start an even busier fall.

Massachusetts: Massachusetts has taken a leadership position in offshore wind, highlighted by its doubling of its offshore commitment to 3200 megawatts (MW) on August 31 and the stunning announcement on September 1 that the Vineyard Wind 800 megawatt (MW) winning bid was priced at a levelized cost of $65/MWh in 2017 dollars (or 6.5 cents per kilowatt hour), which is projected to save ratepayers millions of dollars over the 20-year life of the project.

Vineyard Wind will soon start to select some of their tier 1 contractors – including turbine manufacturers, foundation suppliers, and installation contractors. They hope to start construction next year and begin delivering clean energy in 2021.

U.S. Bureau of Ocean and Energy Management (BOEM) is scheduled to auction the two remaining offshore wind energy lease areas in the Massachusetts Wind Energy Area (MAWEA) by the end of the year, which provides the possibility of having additional offshore wind developers competing for the next Massachusetts Offshore Wind Solicitation next year.

New York: New York is moving quickly to stake out its offshore wind territory and compete with Massachusetts to the north and New Jersey to the south. Governor Cuomo kicked off the year with a call for a solicitation for a total of 800MW of offshore wind in 2018 and 2019, part of his goal to generate 2400 MW of offshore wind by 2030.

On September 20, the state released its draft Request for Proposals (RFP) for the full 800MW, and the final RFP is due out later this fall.

In addition to the Equinor and South Fork existing projects, U.S. BOEM hopes to hold auctions for four Call areas in the New York Bight in 2019.

New Jersey: After eight years of inactivity, New Jersey inaugurated a new governor in January whose administration is strongly committed to offshore wind. On May 23 Governor Phil Murphy signed the Clean Energy Bill, which increased the state’s RPS to 50% by 2030, with an objective of 3500 MW of offshore wind power built in.

The state has three active projects, led by the small (24MW) Nautilus wind farm located about 3 miles off of Atlantic City. Nautilus filed a new application with the NJ Board of Public Utilities (BPU) at the end of July, and the BPU has 90 days to review their proposal. If approved, Nautilus could have its three 8MW turbines producing electricity by 2020.

Governor Murphy made national news by calling for solicitations of 1200MW to be offered in 2020 and 2022, and NJ BPU accelerated its offshore schedule by opening its Application Window for 1100 MW of offshore wind on September 17, with bids due in on December 28, 2018.

Virginia: Dominion Energy (a utility) is partnering with Ørsted to build the Coastal Virginia Offshore Wind (CVOW) project 27 miles off of Virginia Beach. This 12MW demonstration project of two 6-MW turbines could be installed by 2020, and is directly adjacent to an 112,800-acre commercial site leased by Dominion.

This is the first project in federal waters and the significance cannot be overstated. It will help the U.S. government understand how federal regulations may or may not impact developments resulting in changes in regulatory process as well as help improve coordination and communication between agencies. In addition, this project will help the U.S. gain valuable real-world data on how turbines withstand extreme weather events such as hurricanes, a concern in the U.S.

Last week, Governor Northam included a 2000MW carve out for offshore wind in the State’s Energy Plan. More work needs done, but this is a great start to the South East market.

California: Once an afterthought on offshore wind, California grabbed headlines on September 10th when Governor Jerry Brown increased the state RPS to 100 percent clean energy by 2045, and 60 percent by 2030. In order to reach those goals, the state will need to utilize floating offshore wind turbines because of its deep offshore waters. On September 17 U.S. BOEM announced four draft Call Areas for offshore wind development, one in the north and three off of central California.

Overall, it’s clear that the U.S. is moving forward and seizing the opportunities provided by the offshore wind energy marketplace. The U.S. pipeline of 1.8GW is poised to double by this time next year, and will reach 8GW if not more by 2030.