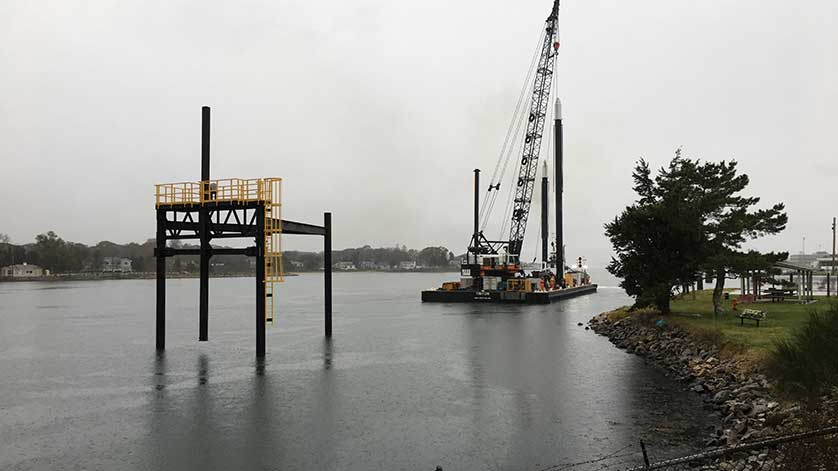 The first of its kind in the US, the Bourne Tidal Test Site (BTTS) was installed in the Cape Cod Canal during the past two weeks. The day before Thanksgiving the barge, owned by AGM Marine, Inc. pulled up its moorings and be towed back to New Bedford, leaving the BTTS to stand ready for business.

AGM Marine (Mashpee and New Bedford), drove three piles in the first three days and assembled the structure on top of the piles. In the past two days, the work platform was secured along with the winch that will power the lifting member that turbines will be attached to. The structure is now secure in the water off the Railroad Bridge and the US Army Corps of Engineers’ Cape Cod Canal Field Office.

The structure was built at MassTank (Middleboro, MA,). They are experienced at manufacturing steel tanks and large structures for all sorts of applications including marine and heavy industrial uses.

The next step for the test site will be to install the data acquisition, processing and transmission system atop the platform. Engineers from Impact Labs (New Bedford, MA) will be working out there in the weeks to come to analyze and test the systems. On the heels of that work, University of Rhode Island engineers have expressed interest in deploying one of their Acoustic Doppler Current Profilers to collect data that will enable them to precisely map the water velocity variations during several tidal cycles. This information will be extremely helpful for future operations.

MRECo is actively seeking tidal device designers who require a place to get their equipment in the water to test performance and energy output. What’s unique about this test stand is that it is pre-permitted, easily accessed by small boat or crane from shore, and can be customized. The water velocity is in the 4 knot range which will enable developers who are aiming toward areas with higher water velocities such as the Bay of Fundy for example, to make invaluable design improvements before scaling up.

Several turbine developers have expressed interest in using this site to obtain data on their devices that are being aimed at remote, portable applications such as replacing diesel power generation for islands or for site specific energy generation.

We also welcome those who have expressed interest in using the site to evaluate corrosion effects, biofouling in high currents, environmental impacts of turbines and much more.

The BTTS is the latest addition to the New England Marine Energy Development System (NEMEDS) which is a network of testing facilities located in a 100 mile radius. These test facilities will help tidal energy device designers obtain valuable information that will enable them to scale up and commercialize more efficiently.