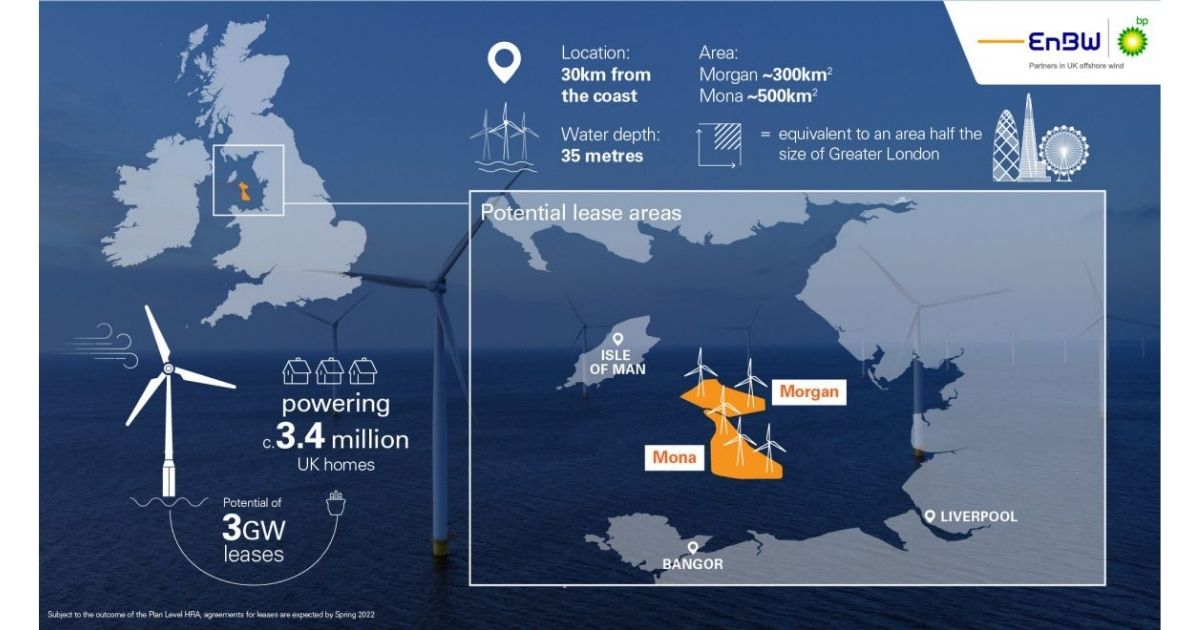 bp and Energie Baden-Württemberg AG (EnBW) have confirmed the names of their planned new offshore wind projects in the Irish Sea – Morgan and Mona – and launched a dedicated supplier portal for the developments.

When complete, Morgan and Mona will have a combined potential generating capacity of 3GW, sufficient to power the equivalent of approximately 3.4 million UK households with clean electricity.

Burkhard Roemhild, EnBW project director, explained the names: "We were inspired by the location of these two offshore wind developments and their connection to the region. Morgan means "sea chief" in Old Welsh, and Mona relates to Ynys Môn, the Welsh name for the Isle of Anglesey."

“We think it’s incredibly important the local supply chain contributes to that, so have today launched a dedicated supplier portal where local companies can pair their skills with the projects’ needs. The portal provides access for companies of all sizes to register their interest for future work.”

The project is encouraging UK-based suppliers to register their interest here, particularly those with connections across North Wales and the northwest of England.

About Morgan and Mona

In February, EnBW and bp were jointly selected as preferred bidder for the two leases in the UK Offshore Wind Round 4, the first such UK leasing round since 2010.

Morgan and Mona were previously referred to as lease areas 1 and 2, or Yellow North and Yellow South. They are approximately 300km² and 500km² in size respectively, are located approximately 30km from the coast, and in average water depths of around 35m.

The partnership initiated wildlife surveys earlier in 2021 and is currently undertaking survey work to characterize conditions of the lease areas including geologic conditions, benthic habitat, and presence of obstructions and sensitive resources that will be considered during development of the projects.

Engaging openly and collaboratively with fisheries and maritime stakeholders

To help the development of Morgan and Mona coexist successfully with traditional maritime industries, the partnership is actively engaging with commercial fishermen and their representatives, gathering insights and feedback.

There are several key ferry transport routes for passengers and cargo across the Irish Sea, linking the British mainland with the Isle of Man and Ireland. The partnership is establishing a maritime navigation forum to proactively identify ways to minimize impact to shipping. bp and EnBW are committed to engaging with other regional communities and industries with an interest in the project.