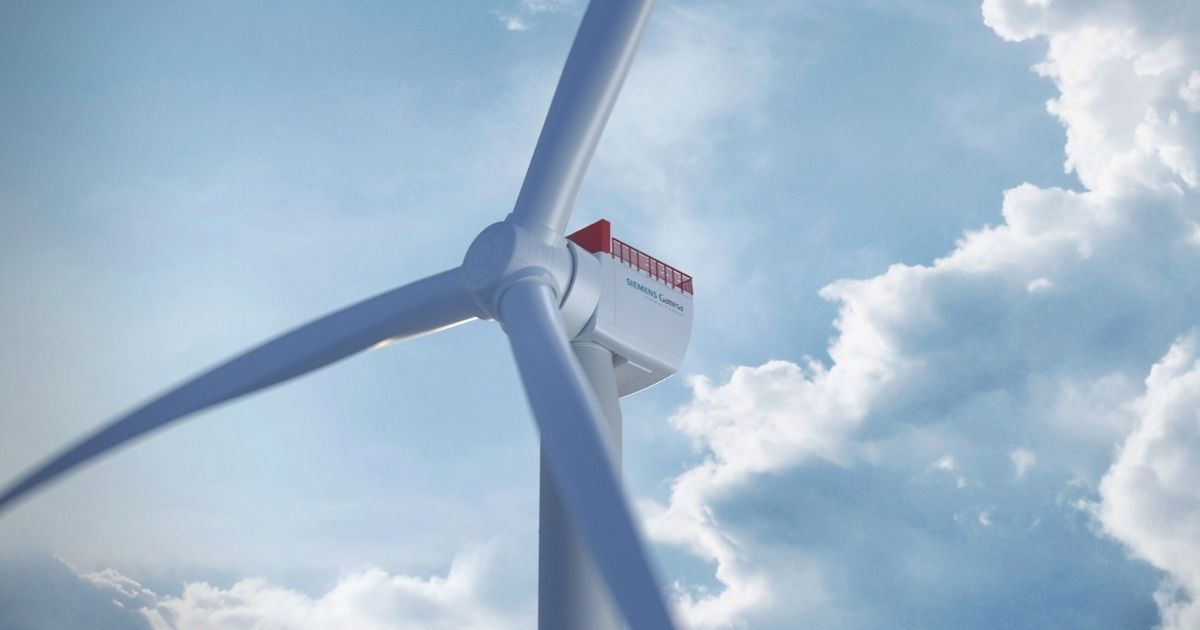 Siemens Gamesa Renewable Energy (SGRE) has been awarded the firm order from RWE for the 1.4 GW Sofia offshore wind power project. Sofia represents a giant leap for the company; located 195 km off the UK’s north eastern coast on Dogger Bank in the North Sea, the project will be the first to install the company’s flagship 14 MW Direct Drive offshore wind turbine.

At 593 square kilometers, the Sofia project will also cover an area greater than that of the Isle of Man and will utilise the evolutionary technology of the SG 14-222 DD offshore wind turbine commercially for the first time anywhere in the world. The development brings other milestones; the 100 turbines will be installed furthest from shore of any project yet undertaken by the company and will feature the world’s largest single-cast turbine blade at 108 m long.

The B108 blades being used at Sofia are more than six times longer than the first offshore wind turbine blades ever installed, namely the 16-meter long blades used at Vindeby in Denmark in 1991. The 35-meter water depth, the distance from the UK’s coastline and the sheer scale of the turbine and its components make the stable, proven technology of Siemens Gamesa’s Direct Drive technology – where no gearbox is involved –an obvious choice for the Sofia wind power project. The strong, reliable winds far from shore will enable the completed wind power project to power the equivalent of 1.2 million UK households. Offshore construction works for the Sofia project will start in 2023 with turbine installation set to commence in 2025.

Marc Becker, CEO of the Siemens Gamesa Offshore Business Unit says, “The UK is the world’s largest offshore wind market, so it is appropriate that it should be the first to install the world’s largest turbine in production, the SG 14-222 DD. We are proud to be partnering with RWE on another highly significant project, and to bring our industry-leading machine to this huge development. A wind power project of this scale is possible due to the cutting-edge use of technology in the turbines, in their manufacturing, and in installation. Rapid innovation of proven technology has made this leap in generating capacity possible – and with it a leap forward toward the goals of decarbonizing energy and achieving Net Zero.”

Sven Utermöhlen, Chief Operating Officer Wind Offshore Global for RWE Renewables, said: “As a leading player in offshore wind, we are delighted to be the first company to sign a firm order with SGRE for these state-of-the-art offshore wind turbines, and that Sofia will be the first project to install them. The fact that our largest offshore wind project will utilize the most innovative and technologically advanced turbines, demonstrates RWE’s continued ambition to be a trailblazer at the forefront of the offshore wind sector. We have previously partnered with SGRE on a number of our offshore wind projects, and we look forward to constructing a flagship project that will make a significant contribution both to expanding our renewables portfolio and to the UK’s ambition of growing offshore wind capacity to 40 gigawatts by 2030.”

The giant leap forward in generating capacity is a critical tool in building a greener power infrastructure and a step forward to achieving Net Zero. Although the Sofia development will cover an area equivalent to the Isle of Man, the generating capacity would power households the equivalent of 14 times the Isle of Man, or four times a city the size of Hull – the center of the UK’s offshore wind power industry.

Siemens Gamesa’s long association with the UK sees Sofia as the latest step in offshore wind developments that began in 2011. Since then, the company has installed around 1,700 offshore wind turbines totaling more than 8 GW of capacity. Included in these achievements are three successive ‘world’s largest’ wind power projects and the creation of a hub for UK offshore wind expertise with the company’s manufacturing, port, and training facility in Hull. The firm order for Sofia is accompanied by a contract to undertake the service and maintenance of the 100 turbines.

Two further preferred supplier agreements for wind power projects employing the SG 14-222 DD turbine are signed, totaling 2.94 GW: the 300 MW Hai Long offshore wind project in Taiwan and the 2.64 GW Coastal Virginia Offshore Wind project in the USA. The enormous machines, with a capacity of up to 15 megawatts with Power Boost, a 222 m rotor diameter and overall height of 252 m, are able to bring utility-scale energy generation with far fewer turbines installed than was possible only a few years ago.

The B108 blades take advantage of the IntegralBlade® technology, as well as the superior Siemens Gamesa PowerEdge™ solution and lightning protection system. Recently produced, the first three B108 blades will be installed on the SG 14-222 DD prototype in Østerild, Denmark later in calendar year 2021.