Compared to wind and solar energy, wave energy has remained relatively expensive and hard to capture, but engineers from Sandia National Laboratories are working to change that by drawing inspiration from other industries.

View a video from The Department of Energy’s Office of Energy Efficiency and Renewable Energy about Sandia National Laboratories’ wave energy converter testing at the Navy’s Maneuvering and Seakeeping Basin in Bethesda, Maryland.

During a multiyear project funded by the Department of Energy’s Water Power Technologies Office, engineers from Sandia’s Water Power program are using a combination of modeling and experimental testing to refine how a wave energy converter moves and responds in the ocean to capture wave energy while also considering how to improve the resiliency of the device in a harsh ocean environment.

“We are working to create methodologies and technologies that private companies can harness to create wave energy devices that will enable them to sell power to the U.S. grid at a competitive price,” Sandia engineer Ryan Coe said. “By getting more energy out of the same device, we can reduce the cost of energy from that device.”

Sandia’s wave energy converter is a large 1-ton ocean buoy with motors, sensors and an onboard computer built at a scaled down size for a testing environment. Commercial wave energy converters can be large and are generally part of a group of devices, like a wind farm with multiple turbines.

“These devices can be in open ocean and deep water, maybe 50 to 100 miles off the coast,” Coe said. “An array of wave energy converters, maybe 100 devices, connected to an underwater transmission line would send the wave energy back to shore for consumption on the grid.”

To capture energy from the ocean’s waves, a wave energy converter moves and bobs in the water, absorbing power from waves when they generate forces on the buoy. Sandia’s previous testing focused on studying and modeling how the devices moved in an ocean-like environment to create a numerical model of their device. 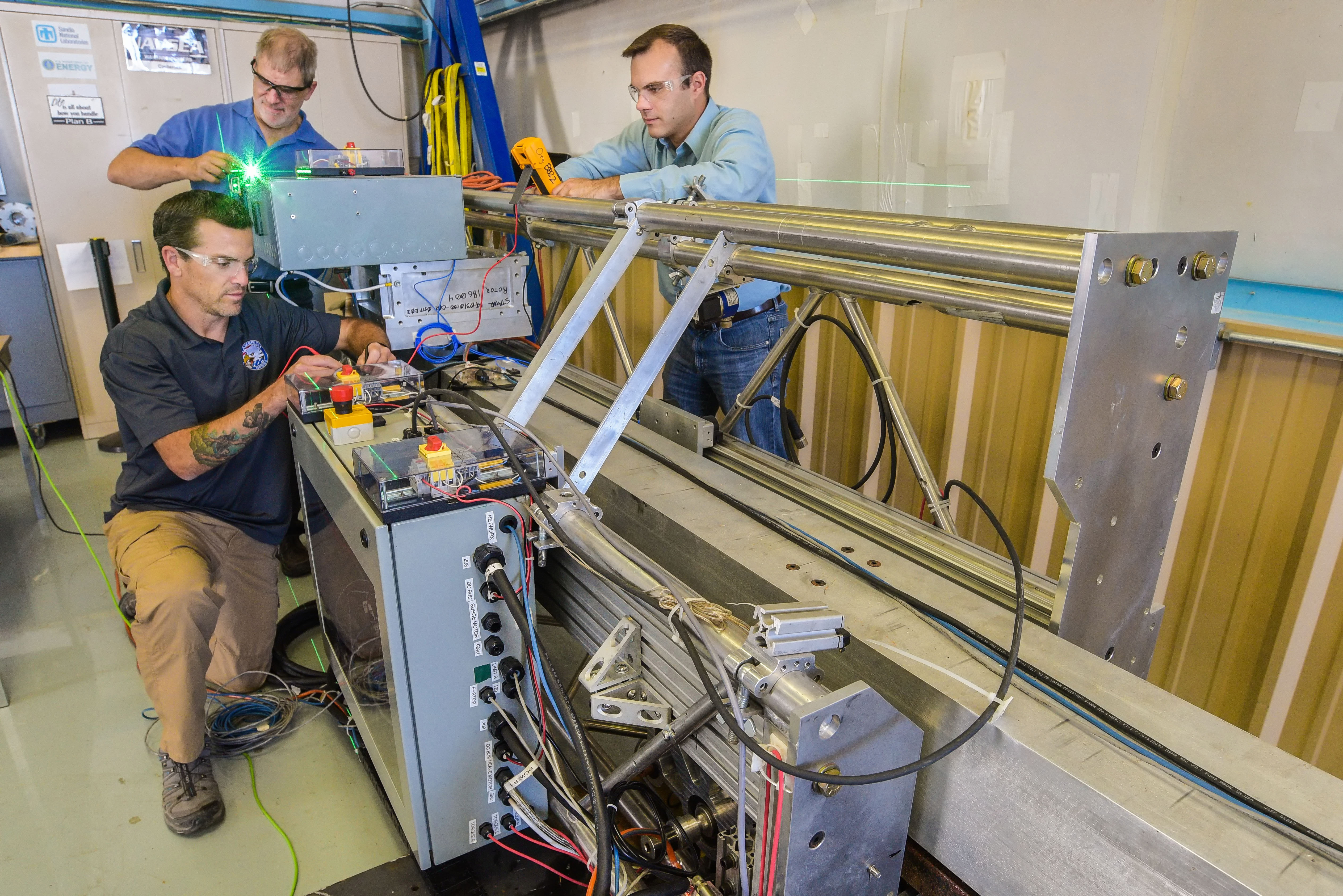 Using the model they developed and validated last fall, the team wrote and applied multiple control algorithms to see if the converter could capture more energy.

“A control algorithm is a set of rules you write that prompts an action or multiple actions based on incoming measurements,” Sandia engineer Giorgio Bacelli said. “The sensors on the device measure position, velocity and pressure on the hull of buoy and then generate a force or torque in the motor. This action modifies the dynamic response of the buoy so that it resonates at the frequency of the incoming waves, which maximizes the amount of power that can be absorbed.”

The control system uses a feedback loop to respond to the behavior of the device by taking measurements 1,000 times per second to continuously refine the movement of the buoy in response to the variety of waves. The team developed multiple control algorithms for the buoy to follow and then tested which control system would get the best results.

“Controls is a pretty big field,” Sandia engineer Dave Patterson said. “You can operate anything from planes to cars to walking robots. Different controls will work better for different machines, so a large part of this project is figuring out which control algorithm works and how to design your system to best take advantage of those controls.”

Bacelli said that while the primary objective of the control algorithm is to maximize energy transfer between the wave and the buoy, the amount of stress being applied to the device also must be considered.

“Resonance also stresses the entire structure of the device, and to expand the longevity of the device, we need to balance the amount of stress it undergoes,” Bacelli said. “Designing and using a control system helps find the best trade-off between the loads and stress applied to the buoy while maximizing the power absorbed, and we’ve seen that our systems can do that.”

Results from numerical modeling with the control algorithms showed a large potential, so the team took the converter to the U.S. Navy’s Maneuvering and Sea Keeping facility at the Carderock Division in Bethesda, Maryland, in August to test the new control methods in an ocean-like environment. The wave tank facility is 360 feet long and 240 feet wide and has a wave maker that can generate precisely measured waves to simulate various ocean environments for hours at a time. Sandia used the wave tank to simulate a full-size ocean environment off the coast of Oregon, but scaled down to 1/20th the size of typical ocean waves to match their device.

“The accuracy of the wave they can generate and the repeatability is outstanding,” Bacelli said. “The ability to recreate the same condition each time allowed us to conduct very meaningful experiments.”

The team ran a baseline test to see how the converter performed with a simple control system directing its movements and actions. Then they ran a series of tests to study how the various control algorithms they had designed affected the ability of the device to absorb energy.

“This year, the device can move forward, backward, up and down, and roll in order to resonate at the frequency of the incoming waves,” Bacelli said. “All degrees of freedom were actuated, meaning there are motors in the device for each direction it can move. During testing we were able to absorb energy in each of these modes, and we were able to simulate the operating conditions of a device at sea much more accurately.” In fact, the tests showed theory did match reality in the wave tank. The control algorithms were able to more than double the amount of energy the wave energy converters were able to absorb without a control system.

The team is analyzing the testing data and considering further options to refine the control systems to maximize energy transfer.