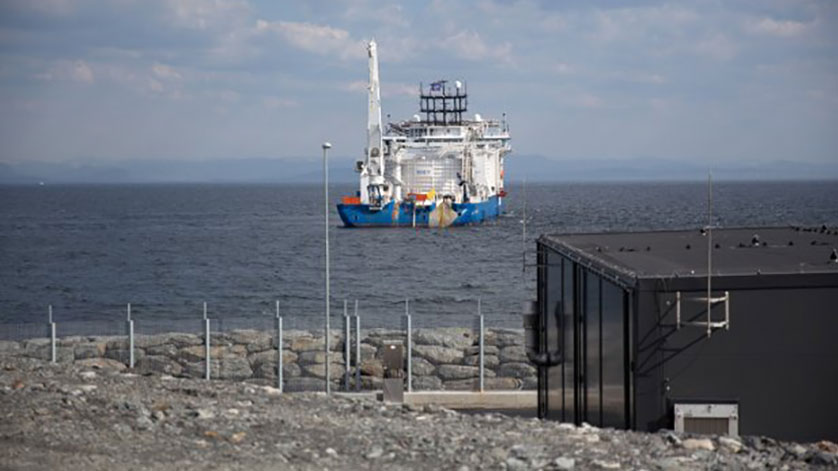 The laying of the cable supplying Johan Sverdrup with power from shore started last week. This helps make the North Sea giant one of the oil and gas fields with the lowest CO2 emissions worldwide.

On Wednesday last week, the cable-laying vessel NKT Victoria began laying the cables that will supply the Johan Sverdrup field with power from shore.

The starting point was the Johan Sverdrup converter station at Haugsneset near Kårstø, and by the end of May the vessel will have laid nearly 200 kilometers of power cables out to the field in the North Sea.

Bundled with the power cables, a fiber-optic cable will once installed ensure good communication and enable monitoring and, when required, remote control of parts of the Johan Sverdrup field’s operations from shore.

“We are now laying the very lifeline of the Johan Sverdrup field, which will supply the field with power from shore for more than 50 years,” says Trond Bokn, senior vice president for Johan Sverdrup.

This makes Johan Sverdrup a key project to help deliver on Statoil’s ambition of reducing annual carbon emissions by 3 million tonnes by 2030, compared with the estimated emissions.“The world is facing considerable challenges ensuring access to enough energy while doing so in a more climate-friendly way. Here Johan Sverdrup will play an important role: over the next 50 years, the field’s considerable reserves will be used to produce significant amounts of energy with low CO2 emissions,” says Bokn.

The CO2 emissions avoided as a result of Johan Sverdrup using power from shore add up to more than 400,000 tonnes of C02 per year, equivalent to the emissions of some 200,000 cars each year.

Several additional measures have been implemented to further reduce emissions during the Johan Sverdrup development. The cable-laying vessel NKT Victoria was designed to be supplied with power from shore while in harbor.

The mobile accommodation vessel «Haven», in use at the field from June onwards, has also been modified to utilize power from shore while in service at the Johan Sverdrup field. And based on current plans, the Johan Sverdrup field will be powered from shore already this autumn so that all the field’s power needs during the remaining hook-up and finalization phase will be met with electricity supplied from shore.

“We’ve worked systematically to take advantage of the opportunities which the power from shore solution has given us. As a result, I believe we’ve been able to reduce the carbon emissions from the field to the minimum,” says Geir Bjaanes, responsible for subsea, power and pipelines for the Johan Sverdrup project.

“Before we get to that stage, however, we need to stay focused on the hectic installation period ahead of us. For the next three weeks or so we will be laying almost 10 kilometers of cables every single day. We have spent much time together with NKT preparing for this, but this will put our skills to the real test, our number one priority being safety and ensuring high quality in execution,” says Bjaanes.

After the start-up of the second phase of the development in 2022, the Johan Sverdrup field will also enable power from shore to reach the remaining fields on the Utsira High – Edvard Grieg, Gina Krog and Ivar Aasen.

Facts About Power from Shore

By using power from shore, instead of gas turbines, CO2 emissions from the production of oil and gas from Johan Sverdrup are estimated at just 0.5 kg CO2 per barrel which is more than 80% lower than the alternative. The CO2 emissions avoided per year are estimated to amount to more than 400,000 tonnes of CO2 per year, totaling almost 20 million tonnes of CO2 over the life of the field.

The other fields on the Utsira High that will be supplied with power from shore after the start-up of the second phase of the Johan Sverdrup development are Edvard Grieg (operator: Lundin Norway), Gina Krog (operator: Statoil), and Ivar Aasen (operator: Aker BP).

In the first phase of the Johan Sverdrup development the electrical equipment (HVDC) for the converter stations both at Haugsneset and on the riser platform is delivered by ABB. All work related to the construction of the converter station at Haugsneset is done by Aibel. NKT is responsible for the delivery and installation of the power cables for the Johan Sverdrup field.