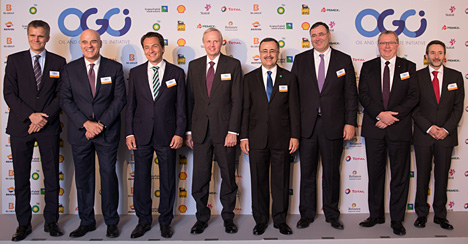 The chief executive officers of 10 of the world’s largest oil and gas companies - which together provide almost a fifth of all oil and gas production and supply nearly 10% of the world’s energy – declared on October 16th, their collective support for an effective climate change agreement to be reached at next month’s 21st session of the United Nations (UN) Conference of Parties to the UN Framework on Climate Change (COP21).

In their milestone declaration, the CEOs of the 10 companies that currently make up the Oil and Gas Climate Initiative (OGCI) – BG Group, BP, Eni, Pemex, Reliance Industries, Repsol, Saudi Aramco, Shell, Statoil and Total – confirmed that they­ recognize the general ambition to limit global average temperature rise to 2 degrees centigrade and that the existing trend of the world’s net global greenhouse gas (GHG) emissions is not consistent with this ambition.

The OGCI member companies have taken significant actions to reduce their GHG footprint, with combined GHG emissions from their operations reducing by around 20% over the past 10 years. In their declaration the 10 CEOs said:

“Our shared ambition is for a 2°C future. It is a challenge for the whole of society. We are committed to playing our part. Over the coming years we will collectively strengthen our actions and investments to contribute to reducing the GHG intensity of the global energy mix. Our companies will collaborate in a number of areas, with the aim of going beyond the sum of our individual efforts.”

Together the declaration and report set out key areas where the OGCI companies will focus their collaboration, including:

Natural gas: contributing to increasing the share of gas in the global energy mix, ensuring it results in significantly lower lifecycle emissions than other fossil fuels for power generation; eliminating ‘routine’ flaring and reducing methane emissions from their operations.

Long-term solutions: investing in R&D and innovation to reduce GHG emissions; participating in partnerships to progress carbon capture and storage; contributing to increasing the share of renewables in the global energy mix.

Energy access: developing projects to provide people with access to energy in partnership with local and national authorities and other stakeholders.

Partnerships and multi-stakeholder initiatives: seeking opportunities to accelerate climate change solutions by working collectively or individually in industry and other initiatives.

The OGCI is a CEO-led, voluntary, oil and gas industry initiative that aims to catalyze practical action on climate change through best practice sharing and collaboration.

The OGCI was established following discussions held during the January 2014 World Economic Forum Annual Meeting and was officially launched at the September 2014 UN Climate Summit.