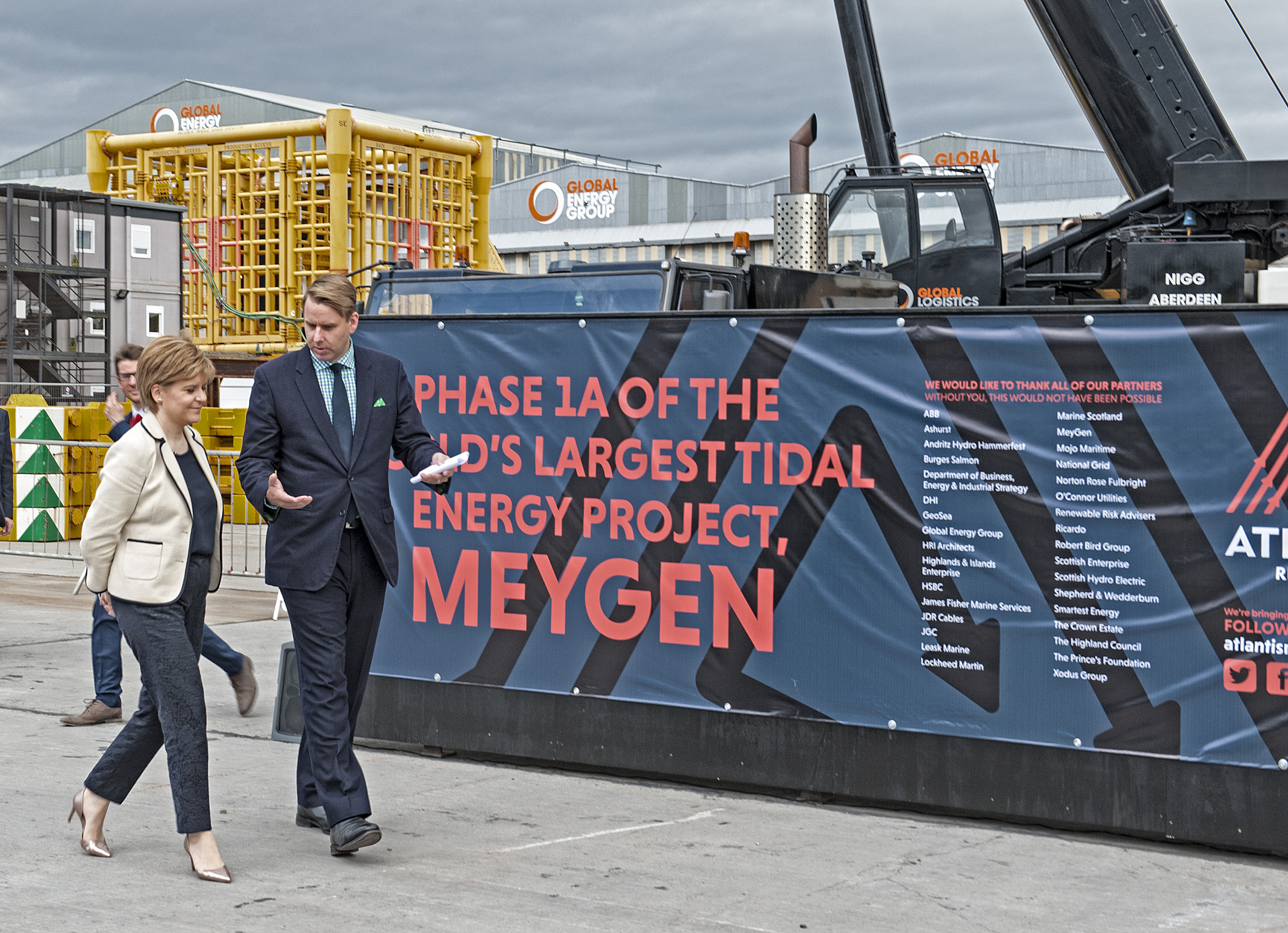 Atlantis, a global leader in the tidal power sector, is delighted to announce that Nicola Sturgeon, First Minister of Scotland, officially unveiled the MeyGen Project, the world’s largest free stream tidal power project, at a ceremony held today at the Nigg Energy Park (“Nigg”) in Scotland.

The four 1.5MW turbines that make up Phase 1A (three built by Andritz and one AR1500 Atlantis turbine) weigh almost 200 tonnes each and have now been fully assembled. They will be positioned on top of their foundation structures on the quayside at Nigg ready for deployment to the MeyGen site in the Pentland Firth. The turbines and their foundations will be transported to the site by the Neptune jack-up vessel operated by Geoseas, a subsidiary of the DEME Group.

The ceremony took place on the Nigg quayside where the first fully assembled turbine, standing 15 metres tall and with blades 18 metres in diameter, was unveiled by the First Minister.

The unveiling follows the MeyGen project’s successful connection to the 33kV Ness of Quoys distribution network in June 2016 following the installation of one of the longest underground 33kV power export cables in the UK by the network operator, Scottish Hydro Electric Power Distribution plc (“SHEPD”).

Atlantis remains on track to deliver first power to the grid from MeyGen Phase 1A later this year, which will be a landmark event for the global marine power industry. When completed, the MeyGen project will consist of 269 turbines and generate enough energy to power 175,000 UK homes.

“Today marks a historic milestone not just for Atlantis and our project partners, but for the entire global tidal power industry. It gives me enormous pride to have reached this juncture after 10 years of tireless work, preparation and planning by everyone associated with this project. This is the day the tidal power industry announced itself as the most exciting new asset class of renewable, sustainable generation in the UK’s future energy mix. This is an industry that is creating jobs and is contributing to making Britain great again and Scotland is the undisputed world leader of this high growth sector. 2016 has proved to be an incredible year for the Company and our shareholders and we look forward to commissioning this phase of the project and then focussing on achieving financial close of Phase 1B, as soon as possible.”

“I am incredibly proud of Scotland’s role in leading the way in tackling climate change and investment in marine renewables is a hugely important part of this.

“MeyGen is set to invigorate the marine renewables industry in Scotland and provide vital jobs for a skilled workforce, retaining valuable offshore expertise here in Scotland that would otherwise be lost overseas. Highly skilled operation and maintenance jobs will also need to be carried out locally, providing strong local employment opportunity for rural areas.

“There is no doubt that the eyes of the world are on this project which is why the Scottish Government’s investment is so crucially important.

“But it is absolutely vital that the UK Government honours its earlier commitment to provide a ring- fenced allocation for marine energy in its renewables support scheme. They must tackle the current uncertainty that exists before they cause irreparable damage to the long term prospects for the sector.”

“The installation of the MeyGen turbines is a hugely significant milestone for the project and for the sector as a whole. The Crown Estate has been working with Atlantis Resources over a number of years, providing specialist support on seabed leasing and investing nearly £10 million in the project to help unlock Scotland’s tidal energy potential. With the deployment of these turbines in a commercial array, a world first, Scotland and the UK remain at the forefront of this industry.”

“We very much welcome Atlantis and its partners in the MeyGen project at Nigg Energy Park. This innovative, world-first project cements the position of the Highlands and Islands and Scotland as a global leader in marine energy. The project already supports 120 jobs, and with the marine sector employing around 1,700 people across the UK, the potential for growth is very exciting. The MeyGen project is a fantastic example of partnership working at its best. We are very pleased to be part of it, and we very much look forward to watching it progress.”