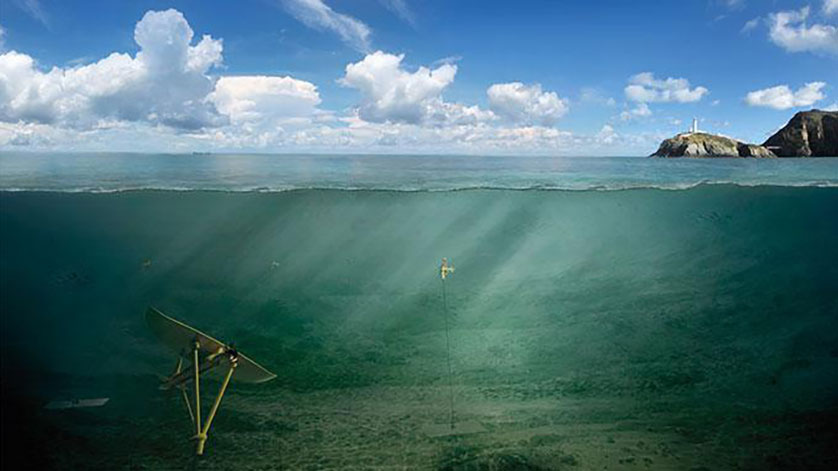 Leading marine energy developer Minesto has announced that the company intends to expand the commercial roll-out of its Deep Green technology in Holyhead Deep, North Wales by taking steps to increase the planned installed capacity of its tidal energy array to 80 MW.

Minesto has submitted a scoping report to UK consenting authorities Marine Management Organization (MMO) and Natural Resources Wales (NRW), asking for their scoping opinion for development of an 80 MW site in Holyhead Deep. After extensive preparatory work, Minesto has concluded that such a scale for its first commercial project is appropriate from both a business and a technology development perspective.

This is underpinned by an in-depth study analyzing the site’s capacity by Xodus Group. The study concludes that the 9 km2area in Holyhead Deep, for which Minesto currently holds an Agreement for Lease for 10 MW from the Crown Estate, is suitable for future deployment of up to 80 MW installed capacity of Deep Green power plants. Minesto looks forward to continue working with the Crown Estate, MMO, NRW and other key stakeholders to enable the scaling up of this site over the coming years.

“This expansion enables economies of scale without us having to conduct parallel and costly site development. We will be able to take greater advantage of the asset base of our operational organization, partner collaborations and the supply chain in Wales and the UK”.

Cost of energy reduced by more than 50 percent

Project economics were certainly attractive for a 10 MW installation at the Holyhead Deep site. However, increasing the scale of the project unlocks further cost reductions by delivering all-important benefits from volume manufacturing and installation synergies.

“Our projection of an 80 MW project in Holyhead Deep gives a levelized cost of energy (LCOE) which is 50 percent lower than for a 10 MW project. This substantial scale-up of the project’s commercial strength will make it even more attractive to site investors. Taking this step also means that we are creating early opportunities for Minesto to sell Deep Green power plants to the newly incorporated site development company Holyhead Deep Ltd”, says Dr. Martin Edlund.

The cost reduction also applies on the Deep Green technology itself, which would move several generations in its evolution through the volumes of an 80 MW installation in Holyhead Deep.

A stepwise expansion from demonstrator to industrial roll-out

Following the planned installation of the first 0.5 MW commercial-scale demonstrator this year – backed with EU funds through the Welsh Government – Minesto intends to develop the Holyhead Deep site in three phases as part of a deploy-and-monitor approach. This gradual expansion will see Minesto taking the Deep Green technology from demonstrator to full industrial roll-out in North Wales.

The scoping request submitted to MMO and NRW is the first step in the process of secure all necessary leases and consents for up to 80 MW. Throughout this process, Minesto will continue to engage all relevant stakeholders on a regular basis. The next stakeholder event is planned to be held in the springtime once the company has received an official response from the consenting authorities.

“This is an exciting opportunity to develop the tidal energy sector in Wales. In Holyhead, we have already created 15 full-time jobs to date. We have also created significant and tangible opportunities for the Welsh and UK supply chain. The ultimate goal is to develop Holyhead into an assembly and export hub for Minesto’s international market expansion”, says Dr. Martin Edlund.

Ken Skates AM, Cabinet Secretary for Economy and Infrastructure said: “I am delighted by Minesto’s progress and their commitment to make Anglesey their main technology deployment and trading hub and I welcome their ambitious plans to grow their business in Wales.”