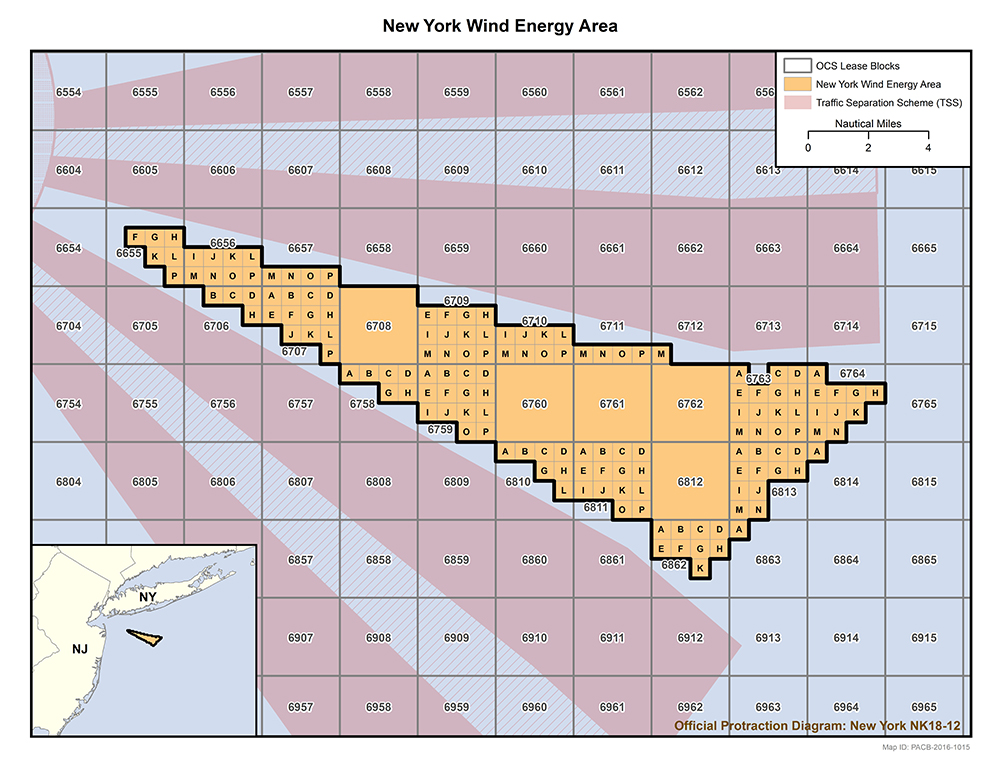 “New York has tremendous offshore wind potential, and today's milestone marks another important step in the President's strategy to tap clean, renewable energy from the Nation’s vast wind and solar resources,” Secretary Jewell said. “We will continue to work with the State and local stakeholders through a collaborative effort as we determine what places have the highest potential and lowest conflict to harness the enormous wind energy potential off the Atlantic seaboard.”

“This is a great day for New York, and our country as we continue to diversify our nation’s energy portfolio,” BOEM Director Abigail Ross Hopper said. “The area is large enough for a large-scale commercial wind project, which could make substantial contributions to the region’s energy supply and assist local and state governments -- including New York City -- in achieving their renewable energy goals.”

The Interior Department has also fostered onshore renewable energy development. Since 2009, the Department has permitted 57 utility-scale renewable energy projects on the Nation’s public lands. Together, the 34 solar, 11 wind and 12 geothermal facilities and associated transmission infrastructure could support more than 26,000 construction and operations jobs and generate nearly 15,000 megawatts of power to communities across the country, enough to power nearly five million homes. Thirteen projects are already producing power. The approved projects represent $40 billion in potential capital investments by industry in clean energy development.

BOEM will now complete an Environmental Assessment (EA) to determine potential impacts associated with issuing a lease. The assessment will also consider the impacts of conducting surveys and installing resource assessment facilities in the area. BOEM may then move forward with steps to hold a competitive lease sale for commercial wind development offshore New York.

BOEM will continue to work with the State of New York to identify additional areas for potential wind energy development in the future. Such areas will provide more opportunities for the development of offshore wind farms and allow developers and BOEM more flexibility when considering additional commercial wind energy projects.

The Wind Energy Area is based on a proposal by the New York Power Authority (NYPA) in 2011, when it submitted an application for a commercial wind lease. At that time, NYPA proposed installing up to 194 wind turbines, each generating 3.6 megawatts (MW) for a total potential yield of nearly 700 MW of wind energy generation for the Long Island and New York City region. In January 2013, BOEM issued a Request for Interest in the Federal Register to assess whether there were other parties interested in developing commercial wind facilities in the same area. After reviewing nominations of interest, BOEM determined that competitive interest in the area proposed by NYPA existed, and initiated the competitive leasing process.

In 2014, BOEM published in the Federal Register a Call for Information and Nominations (Call) and a Notice of Intent to Prepare an Environmental Assessment (NOI). BOEM considered all comments received in response to the Call and NOI in developing the Wind Energy Area. BOEM will continue to work closely with stakeholders throughout the commercial development process to address multiple competing uses and environmental concerns.