Harnessing the Wind at Sea 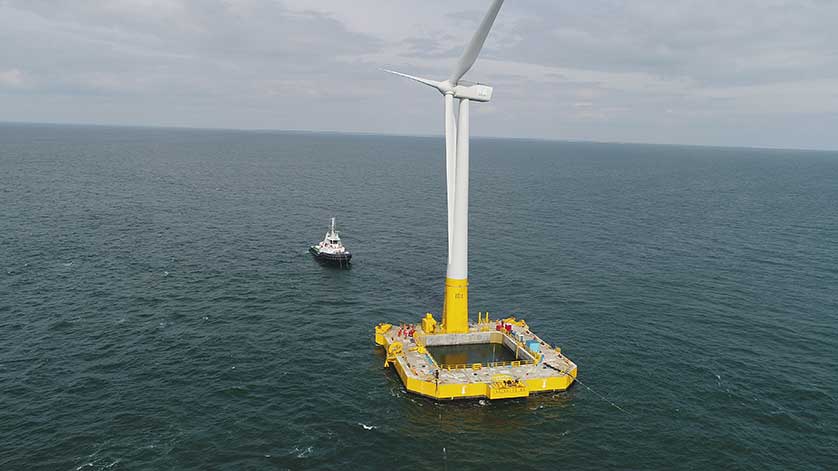 The company’s 62-meter-tall Floatgen wind turbine has recently been installed at the Ecole Centrale de Nantes’ SEM-REV test site. Located 20 km off the Atlantic coast in France, the wind turbine has delivered power to the French grid since the 18th of Sept.

At present being run under test conditions, the floating wind turbine has already overcome five-meter high waves and 15 meter per second winds, so is proving its high performance at sea. When expanded into full-scale installations, Ideol’s floating wind turbines could provide energy for millions of people.

The Ideol adventure began in 2010, when Paul de la Guérivière and Pierre Coulombeau decided to explore the concept of a floating wind turbine, which they believed would prove an indispensable addition to wind turbines that are built onto a base fixed to the sea floor.

Expanding the reach of wind turbines

Turning a dream into a reality

To realize their dream the two engineers founded Ideol, based near Marseille in France. They gained patents for their square-ring platform - that can accommodate any kind of turbine – and the damping pool at its center, that ensures the stability of the platform. Simultaneously, a European consortium was set up with seven partners, including Bouygues, a world leader in civil engineering and the Ecole Centrale de Nantes, to launch a full-scale test with the support of the European Union’s FP7 program (the 7th Framework Programme for Research and Innovation).

Construction of Floatgen took place near Nantes in Saint Nazaire and Serge Gracia, strategic projects manager at Ideol explains: “Once we were established in Saint-Nazaire, this extraordinary but exciting adventure became a day-to-day reality. For each of us, there was pride in being the first to demonstrate the Ideol floating solution, and taking part in building the first offshore wind turbine in France.” He continues: “we are proud of our work and have overcome technical challenges. In several months we have succeeded in building the foundation and developing and creating the transition piece, and conducting tests.”

SKF was commissioned by Ideol to perform the initial audit of the condition of the Vestas V80 turbine purchased for the Floatgen project. A team from SKF Solutions Factory France came to examine the main bearings, the quality of the grease and the electrical system of the generator (Baker analyzer). A continuous vibration-monitoring system was installed to cover the whole kinematic chain of the machine (main bearings, gearbox, generator), enabling the vibratory performance of the machine to be monitored remotely.

Ideol already has other major projects in the pipeline, such as a wind farm with four 6 MW turbines in the south of France or a commercial-scale project off Japan. In fact, CEO of Ideol, Paul de la Guérivière, says: “by 2030, just off the Mediterranean coast, floating wind power production could reach an estimated 3 GW, which amounts to the electricity consumption for 6.8 million people.” It seems that fair winds are blowing for the future of Ideol and its floaters.