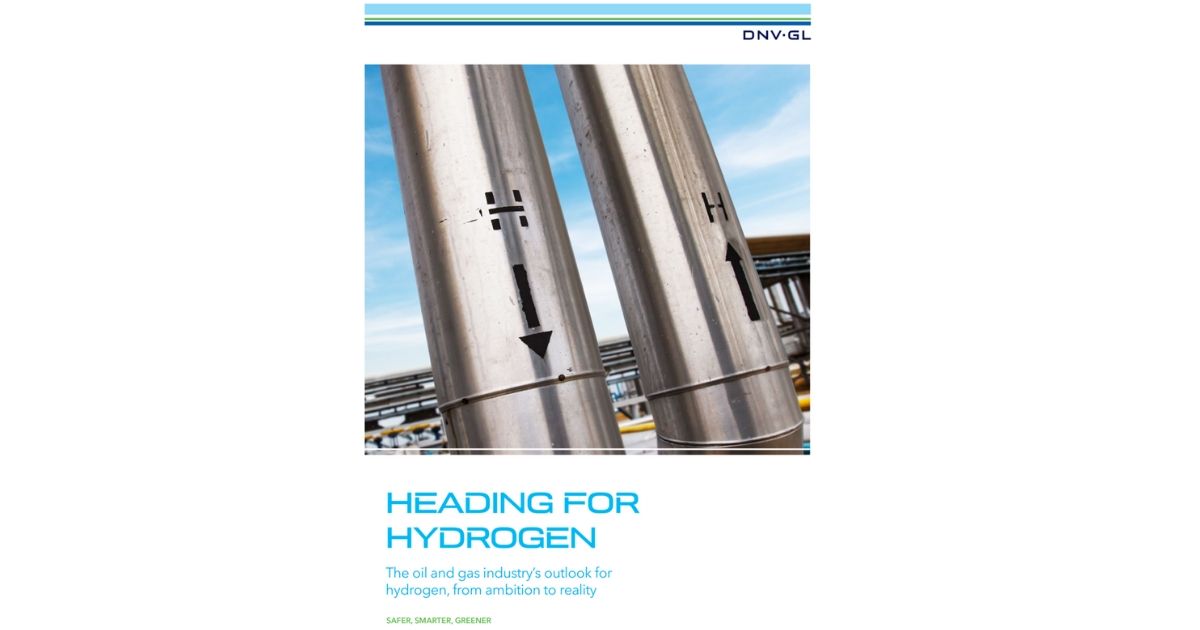 A new report reveals that hydrogen has surged up the priority list of many oil and gas organizations, taking a primary position in the sector’s decarbonization efforts.

A fifth (21%) of senior oil and gas industry professionals say their organization is already actively entering the hydrogen market, according to a new report published by DNV GL, the technical advisor to the sector. The proportion intending to invest in the hydrogen economy doubled from 20% to 42% in the year leading up to the Coronavirus-induced oil price crash.

Heading for Hydrogen draws on a survey of more than 1,000 senior oil and gas professionals and in-depth interviews with industry executives. The report suggests that recent shifts in the industry’s investment priorities are unlikely to affect the sector’s long-term efforts to reduce carbon emissions.

DNV GL found a significant rise in those reporting that their organization is actively adapting to a less carbon-intensive energy mix – up from 44% for 2018 to 60% for 2020. Carbon-free hydrogen production, transmission and distribution is now widely recognized as a central component to the oil and gas industry’s decarbonization efforts.

“Hydrogen is in the spotlight as the energy transition moves at pace – and rightly so. But to realize its potential, both governments and industry will need to make bold decisions,” said Liv A. Hovem, CEO, DNV GL – Oil & Gas. “The challenge now is not in the ambition, but in changing the timeline: from hydrogen on the horizon, to hydrogen in our homes, businesses, and transport systems.”

More than half of respondents to DNV GL’s research in Asia-Pacific (56%), the Middle East & North Africa (54%) and Europe (53%) agree that hydrogen will be a significant part of the energy mix within 10 years. North America (40%) and Latin America (37%) are only a little behind.

The success of a hydrogen energy economy is closely aligned with the future of natural gas, renewable energy, and carbon capture and storage (CCS) technology, according to Heading for Hydrogen.

While hydrogen gas produced from renewable energy (green hydrogen) is the industry’s ultimate destination, analysis shows that the sector can only realistically scale up to large volumes and infrastructure with carbon-free hydrogen produced from fossil fuels combined with CCS technology (blue hydrogen).

DNV GL’s 2019 Energy Transition Outlook, a forecast of world energy demand and supply, predicts that natural gas will become the world’s largest energy source in the mid-2020s, accounting for nearly 30% of the global energy supply in 2050. Natural gas and hydrogen can play similar roles within the global energy system, and the synergies between them – in application and infrastructure – will drive the hydrogen economy.

However, Heading for Hydrogen points to political, economic, and technical complexity in scaling the hydrogen economy.

“To progress to the stage where societies and industry can enjoy the benefits of hydrogen at scale, all stakeholders will need immediate focus on proving safety, enabling infrastructure, scaling carbon capture and storage technology and incentivizing value chains through policy,” said Hovem.

DNV GL is involved in projects spanning all four of these enabling factors, including: The Hy4Heat program in the UK, which aims to establish whether it is technically possible, safe, and convenient to replace methane with hydrogen in residential and commercial areas. Tests on three specially constructed houses are proving the safety case for a switch from natural gas to hydrogen in a domestic setting at DNV GL’s Spadeadam Testing and Research site – the world’s first comprehensive hydrogen testing facility

A project run by Dutch gas and power networks operator Stedin demonstrating that zero-carbon hydrogen could help to decarbonize heating in a residential apartment block near Rotterdam, the Netherlands

DNV GL supports governments with technical and market analysis to provide a knowledge base for decisions regarding national strategy and policy measures.