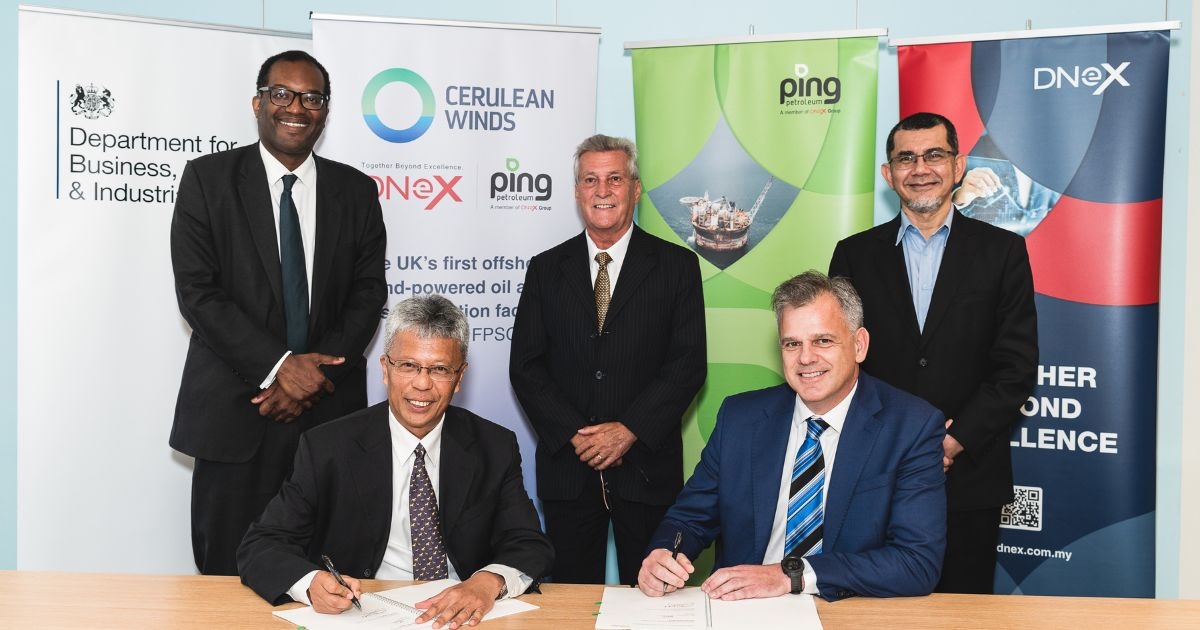 UK green energy infrastructure developer, Cerulean Winds, and Ping Petroleum UK announces the signing of an agreement to create one of the UK’s first oil and gas facilities powered mainly by offshore wind.

Under the agreement signed in a meeting hosted by Secretary of State, Kwasi Kwarteng, the production facility at Ping Petroleum’s Avalon site, located in the UK Central North Sea, will be mainly powered by floating offshore wind.  The pioneering project will help meet the emissions reduction targets agreed between government and industry in the North Sea Transition Deal in March 2021.

The provision of wind power will remove up to 20,000 metric tonnes of CO2 emissions every year from the offshore production facility – the equivalent of taking over 4,000 cars off the road.

The project will demonstrate the use of floating offshore wind in decarbonizing oil and gas production. Later this summer, applications will open to developers for seabed leases to drive the decarbonization of other oil and gas assets across the North Sea.

Ping Petroleum UK acquired a 100% stake in the Avalon site in August 2021, with production expected to begin in 2025. The field has a total estimated recovery of 23 million barrels of oil. The proposed development concept for the plans have already been cleared by the North Sea Transition Authority (NTSA), and a field development plan is to be submitted later this year.

Under these plans, Cerulean Winds with its consortium of Tier 1 industrial partners will provide a large floating offshore wind turbine which will be connected, via a cable, to Ping Petroleum’s Floating Production & Storage vessel.

This will be one of the largest floating wind turbines built in the UK and will provide the majority of power required by the production & storage vessel. It is expected that green power produced by the turbine will exceed the energy needs of the production vessel, with the partners exploring options to supply excess energy to other nearby production facilities. The production vessel is a 60-metre diameter facility with a storage capacity of 270,000 barrels of oil and is capable of producing up to 30,000 barrels of oil per day.

As part of the agreement with Ping, Cerulean Winds have committed to fully manufacturing and assembling the offshore wind turbine in the UK. The project is expected to realize between £80-100 million in investment in the development and in the UK’s renewable energy supply chain.  The project was enabled by a grant to Cerulean Winds through the Floating Offshore Wind Demonstration Programme from the UK Government’s Department of Business, Energy and Industrial Strategy (BEIS) to support the innovation and optimization of the technology that will be deployed.

Tan Sri Syed Zainal Abidin Syed Mohamed Tahir, Group Managing Director of DNeX, said: “As the world transitions to a low-carbon future, Ping is excited to be an early implementor of this revolutionary technology in the UK North Sea for our new greenfield project, Avalon. This project which uses offshore wind to power operations demonstrates our long-term commitment to establish a low carbon development concept. It will substantially lower the emissions intensity of our operations which supports long term climate change goals globally.”   “In addition, it enables us to seize market opportunities arising from the energy sector’s low-carbon transformation and development. The creation of an additional revenue stream via the supply of excess energy to nearby facilities will positively contribute to our financial performance."

“Furthermore, we will gain experience and exposure to the relevant markets and stakeholders within the renewable energy sector which may lead to strategic business developments ahead.”

Dan Jackson, Founding Director of Cerulean Winds, said: “Our partnership marks a significant milestone for the oil and gas industry in creating one of the UK’s first production facilities to be powered by clean, green and affordable offshore wind energy.

“This innovative and pioneering project will be ‘Made in the UK’ and through our delivery partners, we will be realizing significant investment in UK fabrication yards and ports. This is a critical step in scaling the UK supply chain and building experience and a track-record to exploit future opportunities in the fabrication, assembly and servicing of offshore wind developments.

“This project will demonstrate how we can harness the power of affordable, offshore wind to deliver significant reductions in the carbon emissions of oil and gas production. The UK has a golden opportunity to make our domestic oil and gas production the cleanest in the world - scaling the green economy and creating thousands of jobs in the process. We are thankful to BEIS for encouraging research and development which highlights to potential investors that the UK Government endorses the rapid development of integrated floating offshore wind technologies to support industrial decarbonization."

This important step in progressing the Avalon project was welcomed by the UK Government.

Business and Energy Secretary Kwasi Kwarteng said: “The North Sea oil and gas sector has been a major British industrial success story for decades. We must keep supporting production on the UK Continental Shelf for security of supply as we transition to clean, affordable, home-grown energy. In the meantime, we need to cut emissions from production. Platform electrification projects such as this are a welcome step forward to reduce emissions from oil and gas production, secure jobs and new skills and deliver on the commitments of the landmark North Sea Transition Deal.”

Cerulean Winds has previously announced a floating offshore wind and green energy proposal for Crown Estate Scotland’s Innovation & Targeted Oil and Gas seabed leasing round. The initiative provides seabed leases to green energy developers to support the electrification and decarbonization of oil and gas facilities in the UK Continental Shelf. Cerulean Winds’ plans to bid for multiple sites at 1.5 GW scale of floating offshore wind would unlock £6 billion proposed investment per site, and would abate significant CO2 emissions of UKCS oil and gas assets from 2027.