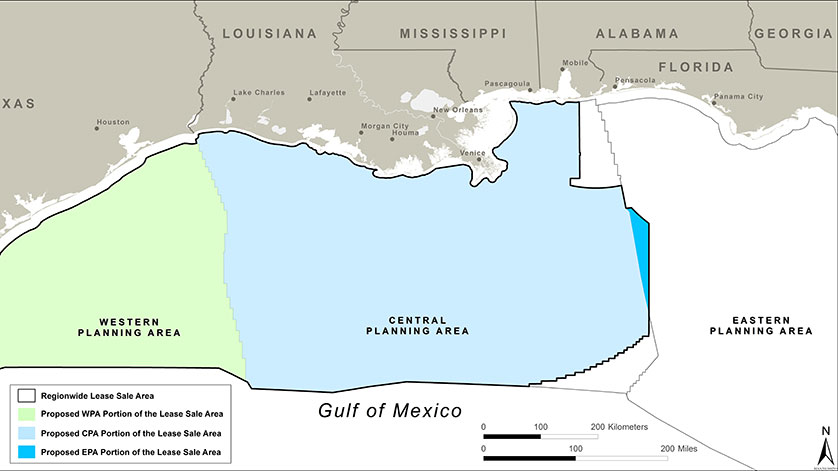 U.S. Secretary of the Interior Ryan Zinke has announced that the Department will offer 75.9 million acres offshore Texas, Louisiana, Mississippi, Alabama, and Florida for oil and gas exploration and development. The region-wide lease sale scheduled for August 16, 2017 will include all available unleased areas in federal waters of the Gulf of Mexico and provide a reduced royalty rate for shallow water leases to encourage exploration and production under current market conditions.

Lease Sale 249, scheduled to be livestreamed from New Orleans, will be the first offshore sale under the National Outer Continental Shelf (OCS) Oil and Gas Leasing Program for 2017-2022. Under this program, ten region-wide lease sales are scheduled for the Gulf, where resource potential and industry interest are high, and oil and gas infrastructure is well established. Two Gulf lease sales will be held each year and include all available blocks in the combined Western, Central, and Eastern Gulf of Mexico Planning Areas.

On June 29, President Donald J. Trump and Secretary Zinke announced the public comment period for a new Five-Year National OCS Oil and Gas Leasing Program. The comment period is the first step in executing the new program. The 2017-2022 Program, which begins with the lease sale announced today, will continue to be executed until the new National OCS Oil and Gas Leasing Program is complete.

"Our Outer Continental Shelf lands offer vast energy development opportunities and we are committed to encouraging increased energy exploration and production in these offshore areas to maintain the Nation’s global dominance in energy production," Secretary Zinke said. "As a global energy leader, we will foster energy security and resilience for the benefit of the American people. A strong offshore energy plan that responsibly harnesses more of our resources will spur economic opportunities for industry, states, and local communities, creating jobs and revenue. That's why we also are developing a new national Outer Continental Shelf oil and gas program that will best meet our future energy needs."

Lease Sale 249 will include about 14,220 unleased blocks, located from three to 231 miles offshore, in the Gulf’s Western, Central and Eastern planning areas in water depths ranging from nine to more than 11,115 feet (three to 3,400 meters). Excluded from the lease sale are blocks subject to the Congressional moratorium established by the Gulf of Mexico Energy Security Act of 2006; blocks that are adjacent to or beyond the U.S. Exclusive Economic Zone in the area known as the northern portion of the Eastern Gap; and whole blocks and partial blocks within the current boundary of the Flower Garden Banks National Marine Sanctuary.

"To advance commonsense domestic energy production, the terms of this sale have been developed through extensive environmental analysis, public comment, and consideration of the best available information,” said Counselor to the Secretary on Energy Policy Vincent DeVito. “This will ensure appropriate resource development and further our energy dominance strategy.”

The Gulf of Mexico OCS, covering about 160 million acres, has technically recoverable resources of 550 million barrels of oil and 1.25 trillion cubic feet of gas, accounting for nearly three-fourths of the oil and a fourth of the natural gas produced on federal lands.

The lease sale terms include stipulations to protect biologically sensitive resources, mitigate potential adverse effects on protected species, and avoid potential conflicts associated with oil and gas development in the region. Additionally, BOEM has included appropriate fiscal terms that take into account market conditions and ensure taxpayers receive a fair return for use of the OCS. These terms include a 12.5 percent royalty rate for leases in less than 200 meters of water depth, and a royalty rate of 18.75 percent for all other leases issued pursuant to the sale.

"The rate change reflects this Administration's willingness to swiftly respond to economic indicators,” said DeVito. “The 12.5 percent royalty rate is closer in harmony with the current market and federal onshore lease sales.”

As of July 3, 2017, 15.6 million acres on the U.S. OCS are under lease for oil and gas development (2947 active leases) and 4.1 million of those acres (842 leases) are producing oil and natural gas. More than 97 percent of these leases are in the Gulf of Mexico; about 3 percent are on the OCS off California and Alaska.

All terms and conditions for Gulf of Mexico Region-wide Sale 249 are detailed in the Final Notice of Sale (FNOS) information package, here. Copies of the FNOS maps can be requested from the Gulf of Mexico Region’s Public Information Unit at 1201 Elmwood Park Boulevard, New Orleans, LA 70123, or at 800-200-GULF (4853).