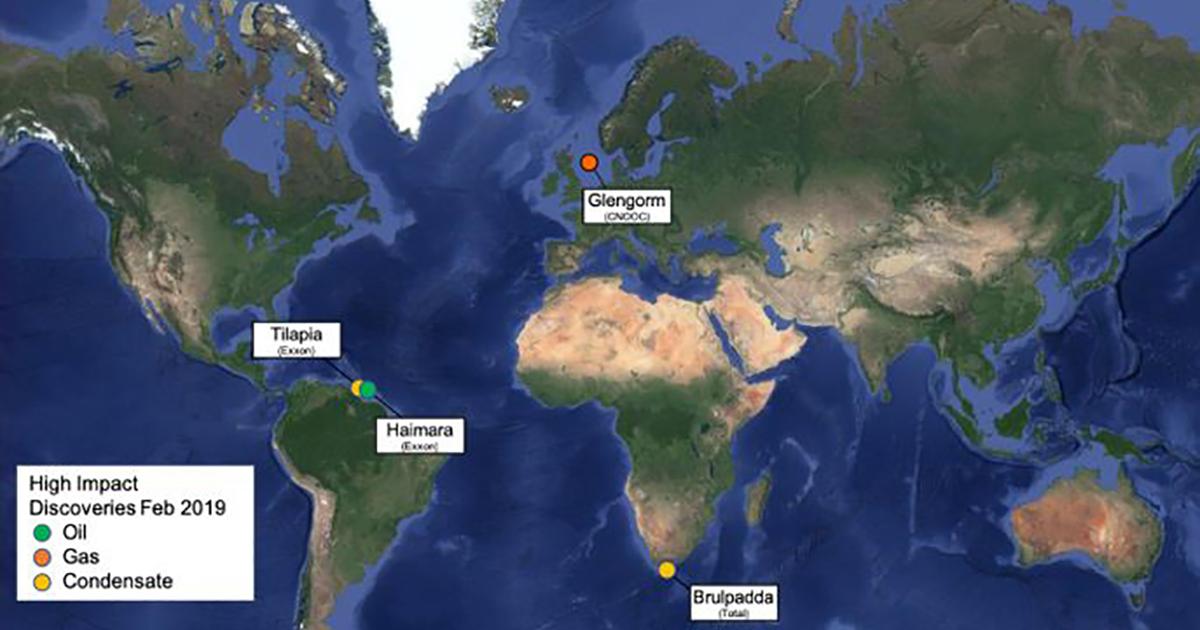 In the first few weeks of 2019 there have been four high impact discoveries of conventional oil and gas, finding 25% of the high impact volume discovered globally in the whole of 2018.

One of these discoveries, Glengorm in the UK North Sea, is reported to be the biggest there since 2008. The second and third are offshore Guyana in the Stabroek license, the gift that keeps on giving, with the fourth in the Outeniqua Basin, deep water South Africa, where the Brulpadda well has opened a new world class gas and oil play with a discovery that the operator, Total, says could contain up to one billion barrels oil equivalent of gas and condensate resources.

Westwood estimates that at least 1.3bnboe of resource has already been discovered through high impact exploration in 2019, compared to ~5.3bnboe discovered in the whole of 2018.

Before Brulpadda, the last basin-opening frontier discovery was at Liza , offshore Guyana, in 2015. Brulpadda represents a significant deepwater extension of a play that had been proven in shallow water, back in the 1960’s. Total now plans to acquire 3D seismic data over the block and test a number of prospects that have already been identified. With a mapped area of ~3500sqkm, the play fairway that may have been opened by Brulpadda is potentially larger than the currently proven area of the Liza Upper Cretaceous play offshore Guyana. The challenge with Brulpadda is that it is gas rather than the oil that was hoped for, and commercializing it won’t be as straightforward as in Guyana.

The Stabroek license continues to deliver and the Haimara and Tilapia discoveries have provided the highest net pay yet seen (at Tilapia) and proven a substantial gas and condensate accumulation (at Haimara) to add to the prolific oil play. The gas-oil-ratio of the oil discoveries is believed to be ~20% and a planned DST at Longtail will provide critical information about any potential gas development scheme.

In the UK North Sea, the CNOOC operated Glengorm discovery, reported at ‘close to 250mmboe’ by partner Total, is potentially the largest discovery since Culzean in 2008, also 250mmboe. The discovery will reignite excitement for the HPHT play of the Central North Sea and eyes will be on the Rowallan well, currently drilling, and Edinburgh, which is one of the largest undrilled prospects on the UKCS.

Utilizing the Wildcat platform, Westwood has identified another 76 high impact wells either drilling or planned for the remainder of 2019 testing 22 billion barrels, half of which are in deep water.